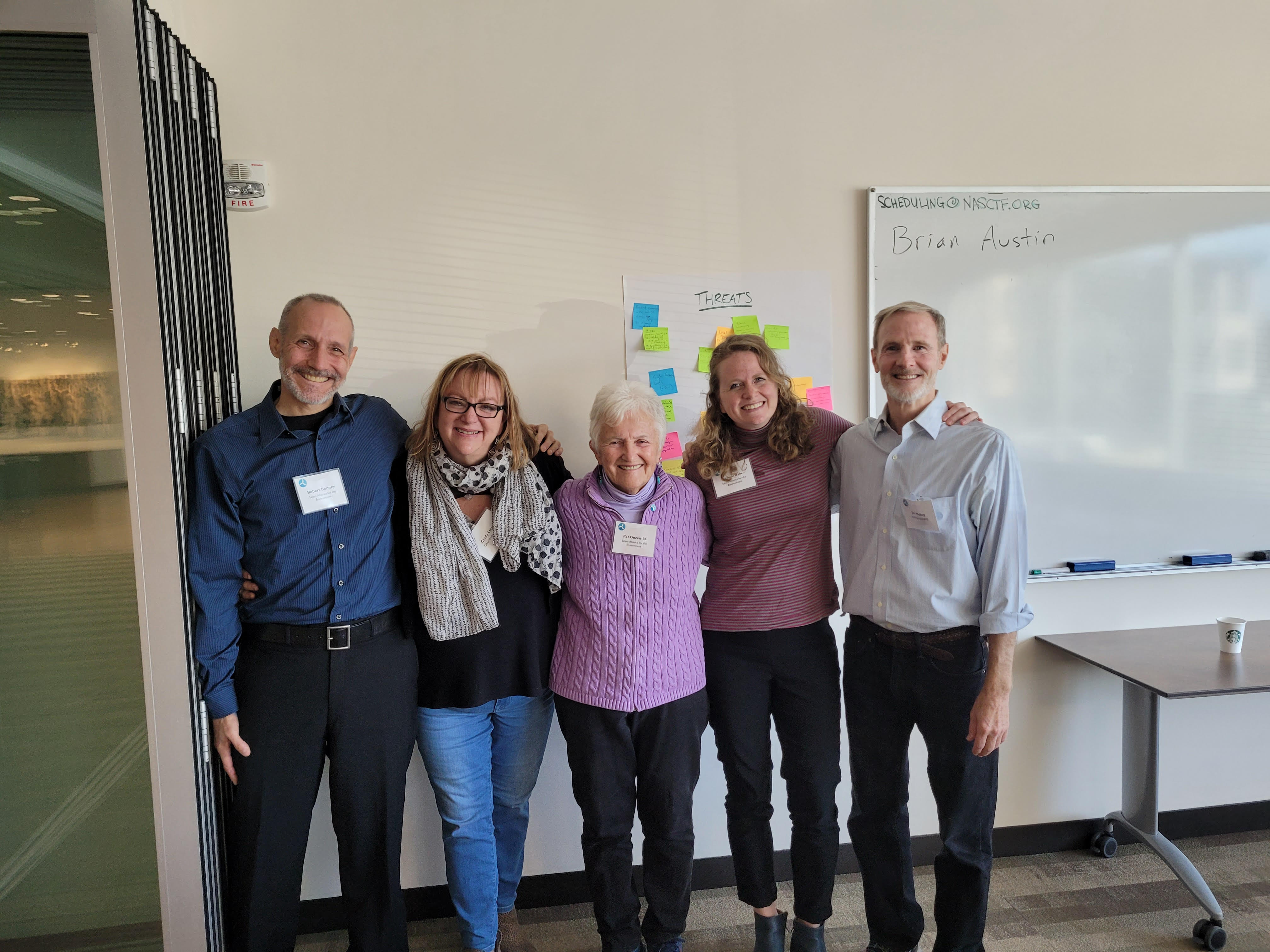 Offshore wind is coming to Massachusetts. For Salem, this presents an incredible opportunity to return to the city’s nautical roots by hosting the state’s second offshore wind port. The site of the future port was previously occupied by an ancient, dirty, coal-fired power plant with hazardous coal dust blowing into the nearby neighborhoods and toxic emissions spewing into the air. Neighbors and organizers with Salem Alliance for the Environment (SAFE), in partnership with Clean Water Action and the Filthy Five campaign, worked for years to have the plant closed and protect their community from the health hazards caused by coal. Now, SAFE is still collaborating with Clean Water and leading the efforts to make sure that the emerging offshore wind industry brings good, union jobs and a healthy tax base back to Salem’s diverse community.

I got a chance to chat with Patricia Gozemba, a Co-Chair of SAFE, and Bonnie Bain, who sits on SAFE’s advisory board, about the trailblazing work SAFE is doing to make sure that the people who build Massachusetts’ wind industry are representative of the state’s environmental justice communities like Salem.

How did you each first get involved with organizing in Salem with SAFE and with Clean Water Action?

Pat: We originally got involved with Clean Water Action around a strategy to close the coal plant in Salem. I think my first involvement was in 1999. Things started heating up after that. In August of 2001, Greenpeace came to town. They even had the Rainbow Warrior in Salem Harbor. That was very exciting for us! My favorite Greenpeace stunt was when they mounted the coal piles in Salem Harbor in white hazmat suits and planted white crosses in the coal pile as a demonstration of the fact that the plant was killing people. Meanwhile, we were rallying outside the gates of the power plant, and we had no idea this was going on on the other side. It was a big event in Salem.

Fast forward to the closing of the coal plant. We had pushed the city to do a study of what could be at that site instead of a power plant. Salem is an environmental justice community, and we wanted to make sure that the tax base of the city would be supported. In 2014, SAFE and the City had to accept the bitter pill of a quick start gas plant slated to decommission in 2050. SAFE’s goal now is to get the gas plant decommissioned by 2035. Adjacent to the gas plant is a large lot, once the site of the old coal piles, on which the gas plant developers wanted to build condos. SAFE fought the condos and proposed that the lot be used in the offshore wind industry. We won!

Bonnie: I moved to Salem in 2019. I love the city, and one of the reasons I fell in love was that organizations like SAFE were thriving, and the city government actually listened. It felt like a real community, and that was something I was looking for. I had worked in residential solar and then in commercial battery storage, but I started my career in renewable energy in a mission driven, nonprofit space. I’ve always wanted to return to the social impact side of this energy transition.

Bonnie: In my previous work, I was the only woman in a team of all men, so I understand personally what it's like to be in an underrepresented group out in this field. We have to be proactive and intentional to make sure that we work to get people into these coming jobs in the wind industry who might not see themselves represented in this type of work yet. I love that SAFE fought for wind to be here, and now we’re pushing to make sure that it is actually a just transition and that our frontline communities are the first to benefit from these jobs.

It’s really about creating the spark for people right now because we’re still wrapping our heads around the specifics of what the jobs will be, and what the skills are that folks will need. We are behind the scenes, reaching out to local partners, hopefully creating a pipeline and getting the word out about wind jobs that are a few years away. A few years might seem like a long time, but these jobs require technical training, so we need people to start training now. Is it really a just transition if these jobs aren’t going to the local people here? I don’t think so.

What kind of local community outreach is SAFE engaged in?

Pat: Environmental justice is language justice. You have to speak in the language of the people you are speaking to. We want everybody’s boat to rise, and for that to happen, people have to understand the problems in their own language. We needed to add more local voices to our Board and support folks who speak Spanish who could go out into the community and speak to neighbors. We recruited two outstanding women from the community in Salem, Esmeralda Bisono, Sustainability & Resiliency Manager for the City of Salem and my neighbor Ana Nuncio who is an ESL editor, educator, and founding member of the Latino Leadership Coalition.

Bonnie: Webinars in Spanish: we thought that would be fairly easy, but it was a challenge. Ana was fantastic in keeping us honest. Yes, we can translate this new language around a new industry… kind of… but it hasn’t really been translated yet, so we’re making the road as we walk together. She is such an incredible resource with a wealth of information and resources. Ana connected us with a Bilingual Senior Administrator and Family Engagement Facilitator at Salem Public Schools. This is a trusted person in the community for her work with teachers, parents and students. In our view, having a person who is already known in the community presenting information is better than hiring outside for a translator.

We also had a Salem high schooler who took the KidWind summer program write a blog about her experience and help get the word out that way too. We are hosting events for parents, sharing information, and just working to spread the word that these jobs are coming, and we need to prepare for them. We’re really scrapping it together, and it’s fun! It’s a really incredible space to be in right now.

Pat: Having a good working relationship with our city government has been so important. I think it’s really important to work with local elected officials, to hold them accountable, and to share your vision.

Bonnie: The beauty of SAFE is these are trusted, longtime, decades-long activists within this organization, so we do have the trust of the City of Salem. Our Port Planner/Authority, Seth Latrell, noticed the work we are starting to do and made the connection so we could get a contract to lead partnership development for the Workforce Investment Board in the region. This then lends us more credibility as we reach out beyond our city limits to the region to discuss offshore wind workforce development.

Pat: We’re also working with our partners in the labor movement – the North Shore Labor Council. When this wind opportunity came up, I really believed that one of the first things we needed to do was connect with labor. I’m an old union president myself. We’re really pleased with what the unions have extracted from industry so far, like the project labor agreement that was put in place with the Southeastern Massachusetts Building Trades Council for the first offshore wind project coming to Massachusetts. I think connecting with labor, and being aware of the concerns of labor, where they are being shut out or let into this new industry, and how we can stand together with labor, is an environmental justice issue.

One of the roles we are playing is making sure that people from underrepresented communities get access to these union jobs. Often those training programs that the unions run, that are sort of pre-apprentice training programs, have not been really aggressive in looking for minorities and women to be in them. And that’s one of the roles that we’re trying to play is saying, “Hey, this community really should be a part of it.” It’s heartening for me to hear when we meet with labor, white men talking the language. I do think that some of them are really getting it. They are thinking of the girls in their families and their potential opportunities.

Bonnie: We’re playing this behind the scenes role. We want to have a continual conversation to start creating a pipeline of people who can be mentored. We want to gather the data of what are the jobs, what are the needs, and what is the training needed to get those jobs. And by providing a model program in our community here in Salem, we believe we can expand it out to impact other environmental justice communities in our region; namely, Lynn, Gloucester, parts of Beverly, and Peabody.

What do you want the future to look like for the kids in Salem?

Bonnie: I could not in good conscience have a child without committing a lot of time to making sure that their world, and their future, was somewhat secure. That’s why I do what I do and why I do it locally. We have to create a sense that there’s enough for us all. We’ve got a scarcity mindset in the US. I want my child and her peers to be able to think in an abundance mindset. This is about all of her peers and her generation. We’ve got to step up to ensure their future.

Pat: One of the books I’ve read recently is Braiding Sweetgrass by Robin Wall Kimmerer, and a major theme of the book is that we have such an abundance, and that is what we need to focus on. We do not want to behave like missionaries going into environmental justice communities. Esmeralda and Ana keep us honest. I’m getting so much from working with our EJ community, and I hope that they are getting something from working with us. And that is what we’ve got to be mindful of: being helpful to each other on planet Earth.