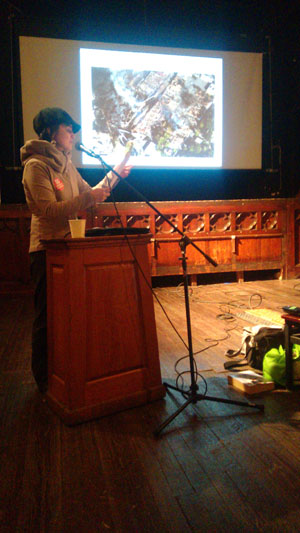 Oil production in North America has skyrocketed in the past five years, with industries using increasingly dangerous and desperate technologies to extract fossil fuels from the ground. Particularly in the Bakken Shale region of North Dakota, the cheapest way for companies to move oil to profitable markets is to load it onto trains and send it to the coast, where refineries and export terminals can transform it into fuel and transport it to wherever they can find the best price. With increasing oil production comes increasing oil train transport – and a mind-boggling increase in oil train accidents. When train cars carrying crude oil derail or hit something, they often puncture; when they do, a slight spark can set off a fiery explosion that turns the train car into a bomb.

Trains carrying volatile crude oil from North Dakota travel through Baltimore constantly – 100 million gallons traveled through the city last year. The trains enter the city in the Morrell Park neighborhood of Southwest Baltimore and pass near the stadiums, follow a tunnel underneath Howard Street, continue underground along 26th Street through Remington and Charles Village (where a retaining wall collapsed onto the tracks two years ago), through Clifton Park, and exit through East Baltimore on their way to Philadelphia. Other trains travel from Morrell Park to South Baltimore, where the oil is transferred to ships and sent on the Patapsco River and through the Chesapeake Bay. Every neighborhood and watershed the trains cross is in danger – if you live within a mile of the tracks, you could be impacted by an explosion.

I first learned about oil trains in July 2013, after the tragedy in the small town of Lac-Mégantic, Quebec. In the middle of the night, a train carrying volatile crude oil from North Dakota rolled down the tracks alone, reached a speed of 60 miles per hour, derailed in the middle of downtown, and exploded. Forty-seven people were killed, half of downtown was destroyed, and the town is forever scarred by the oil contamination. Since this terrible accident, oil by rail transport has only increased – but communities are getting educated, getting organized, and fighting back.

Last night, more than 70 Baltimore residents gathered just blocks from the oil train route in Charles Village to learn from experts and eyewitnesses about the danger of crude oil shipments and how we can prevent disaster. Marilaine Savard, who lived in Lac-Mégantic, spoke about her experience. She shared about hearing the booms from far away in the middle of the night; about waking up the next morning to images of the devastation; about witnessing the shock, sadness, stress, and anger; about coming to realize that the once-pristine soil and water surrounding the town would probably never recover; about forming a Citizen’s Committee to advocate for Lac-Mégantic and against oil train shipments across the continent; and about seeing 1,000 people march through Lac-Mégantic last summer against oil trains.

Fritz Edler of Railroad Workers United followed her to explain the policies that led to this disaster and the way companies use their workers as scapegoats to avoid criminal responsibility when accidents happen. No executive or decisionmaker was held responsible for the policies that led to the Lac-Mégantic disaster, but the engineer assigned to the train was arrested by a SWAT team and faces decades in prison. Because unsafe designs and policies have yet to be changed, Fritz said, “it is absolutely the case that this could happen where you live.”

In Baltimore, we need to protect ourselves from an oil train disaster – more than 165,000 of us live less than a mile from the tracks. In the past year, Clean Water Action and the Chesapeake Climate Action Network have worked to spread the word and organize neighborhoods across the city, prevent a new oil export terminal from being built in South Baltimore, make sure that companies can’t keep secrets about their oil train shipments and practices, and demand our legislators take action to protect us. Over the next few months we have the chance to support crucial legislation that will make us safer.

Baltimore City Council President Jack Young has introduced an ordinance to require the City to conduct assessments of the health impacts and risks of the transport of crude oil by rail; require the City to update, periodically study, and report on the City's incident response plans; require the City to create a mechanism to ensure proper clean up and effective response to derailments or other adverse impacts; require the City to develop certain public outreach programs. (Read the full text here.) This bill would help the city understand and spread awareness of the dangers of oil train shipments. It is a crucial building block toward policies to protect our neighborhoods.

In the Maryland House of Delegates, Del. Clarence Lam introduced the Rail Safety Act of 2016 (read it here). It will impose a fee on oil transferred within Maryland in order to create a Rail Safety Fund to analyze and implement safety measures. It will also require certain safety measures, like two railroad employees per train instead of one and mandates rail companies file oil spill response plans with the Department of the Environment. As Delegate Lam said, “What happened in Lac-Mégantic was a systemic failure on multiple levels,” and bills like this provide us with the means to prevent those failures.

It will take all of us working together to pass these bills and move toward a future where no community is put at risk by fossil fuels – from drilling to shipping to burning. If you want to move Baltimore toward that future, contact me at jkunze@cleanwater.org about how you can get involved.