In Maryland, the General Assembly meets every year for ninety days, from January to April. During this time, the State’s legislators introduce legislation on a variety of issues and must work together to pass a budget for the year ahead. With the 2017 Maryland General Assembly Session quickly approaching, Clean Water Action is putting together an ambitious plan to advocate for important legislation that will protect and preserve the environment. Here is a quick overview:

We’re confident that with your help, the Maryland General Assembly will pass legislation that results in a better environment for all Marylanders in 2017.

Maryland has made a lot of environmental progress over the past 35 years and thanks to advocates like you, the Chesapeake Bay’s water quality is finally improving. However, the Maryland Department of the Environment is proposing new rules that would roll back septic regulations and put the health of the Chesapeake Bay at risk.

Please tell the Maryland Department of Environment that we can’t afford to go backwards now. Maryland has made too much progress to turn our back on our streams, waterways, and beloved Chesapeake Bay.

Baltimore at Risk from Oil Trains

Baltimore’s deep-water port has always made the city attractive for commerce and industry, a legacy seen today in the ring of polluted post-industrial sites on the shores of the Patapsco River.

This legacy is continuing in new ways today. Crude oil extracted on the other side of the country has put Baltimore, as well as many other communities in Maryland, in the blast zone. Volatile crude oil mixed with vapors and fracking chemicals travel by train from the Bakken Shale region of North Dakota.

When these cars derail or puncture, they explode — which happens more often than you would think — and people as far as a mile away from the tracks are at risk.

In 2014 Baltimoreans first learned that Targa Resources planned to build a crude export terminal in South Baltimore. Neighbors and residents got mad, they organized, and ultimately they won. Clean Water Action and allies worked with nearby communities to force the Maryland Department of the Environment take a closer look at the terminal’s air pollution permits. In July 2016 MDE finally listened and decided not to issue those permits — the terminal will not be built!

Unfortunately crude oil trains still travel through Maryland: some cars to an existing transfer terminal in South Baltimore to offload onto ships, others on their way to refineries and terminals in Philadelphia and New Jersey. While crude oil train transport has dramatically increased over the past five years, public knowledge and preparedness for a potential oil train explosion has not.

That’s why Clean Water Action is working to pass Baltimore City Council Bill 16-0621, which would authorize the City to conduct a health impacts assessment and a risk assessment of crude oil train shipments through Baltimore and the ten miles surrounding it. Those findings will be shared with the public and with emergency planners to inform updates to incident response plans.

Clean Water Action also worked to pass the Maryland Rail Safety Act in the 2016 General Assembly session, which would have raised the fee on crude oil transfers in Maryland to pay for commonsense safety regulations and increased inspections. Although the bill did not pass, advocacy for state action on crude oil trains will continue. These shipments are too dangerous for the rails anywhere, but until the federal government takes action, it’s up to local and state governments to protect their residents from exploding oil trains.

Clean Water Action is proud to endorse Chris Van Hollen for U.S. Senate. Chris has demonstrated a commitment to Maryland communities and a deep understanding of the environmental challenges that we face. He scored 100% on our recent scorecard.

As a State Senator, Chris helped to pass the Maryland Clean Energy Incentives Act and as Congressman, Chris has worked to increase funding for programs that preserve and protect the Chesapeake Bay. Most importantly, if elected to the U.S. Senate, Chris has vowed to protect the Clean Water Act and advocate for strong rules that protect streams, rivers, and drinking water sources for over 117 million Americans.

Chris will be a leader in Washington and fight for the issues you care about most.

The stakes could not be higher and the choice could not be clearer. That is why Clean Water Action has endorsed Hillary Clinton for President. Hillary Clinton is a fighter and has a strong history of protecting our environment, water, and health as First Lady, Senator, and Secretary of State.

She will also defend the Clean Water Rule.

She has called climate change the “defining challenge of our time”, proposed one of the most far-reaching environmental platforms in history, and incorporated a bold vision for environmental justice in her policies. She will continue President Obama’s legacy of action on climate — and expand on it, ensuring the nation meets the commitments made in Paris. Learn more here

Frederick County is rural but rapidly changing. Forest and farmland are becoming sprawl development, further threatening Frederick’s rivers and creeks — already among the most polluted in Maryland. Clean Water Action, Potomac Conservancy, and local residents have teamed up to form Clean Water Frederick, empowering citizens to change County policies to protect drinking water and waterways. The coalition has already passed a Buffer Zone Ordinance to protect local streams. Join us in promoting river-conscious decision-making and a stewardship ethic throughout Frederick County here.

Elsewhere in the Chesapeake Region

When it rains, polluted stormwater rushes into storm drains and Alexandria’s combined sewer system (CSS), dumping untreated sewage directly into the Potomac River. Sewage is a source of nitrogen and phosphorus pollution and is harmful to fish and other aquatic life. Plus it leads to dangerous levels of bacteria such as E. coli in our local waterways.

Many cities across the country are beginning to update their systems to address this problem. Alexandria recently missed an opportunity to adopt a modern Long Term Control Plan (LTCP) to reduce sewage overflow over the next 20 years. Alexandria’s CSS dumps nearly 150 million gallons of untreated sewage into the Potomac River and Hunting Creek every year. The Alexandria LTCP does not include plans for reducing untreated sewage into Oronoco Bay.

Under the current 2013-2018 discharge permit for the city’s CSS the Virginia Department of Environmental Quality (VDEQ) removed water quality monitoring requirements for Oronoco Bay, so there is very little recent monitoring data for discharges into the Bay. However, Alexandria’s 2014 annual report on the CSS shows E. coli concentrations exceeding the state’s standards for bacterial pollution, and older water quality monitoring data for Oronoco Bay collected between 2007-2012 shows frequent violations of the E. coli standard during both rain and dry weather events. Given that nothing has changed in the city’s sewer system, it’s likely that water quality in Oronoco Bay continues to be severely impacted by raw sewage, making it unsafe for swimming, fishing, or boating.

It makes no sense for Alexandria’s city council to ignore this high volume of pollution in Oronoco Bay while it works to revitalize the waterfront and encourage more businesses, recreation, and tourism in Old Town. To protect the public and help restore the Potomac and Oronoco Bay to be fishable and swimmable waterways as envisioned and required by the Clean Water Act, Alexandria needs to include discharges into Oronoco Bay in its LTCP to reduce sewage discharges the city’s sewer system.

Clean water is vital to our economy, health and quality of life. To reduce wastewater pollution and protect Virginia’s waterways we need strong clean water voices in Congress. That is why Clean Water Action has endorsed LuAnn Bennett for U.S. House of Representatives in Northern Virginia’s competitive 10th Congressional District.

“LuAnn Bennett is a leader who will defend vital safeguards for clean water and public health while taking action to fight climate change,” said Michael Bochynski, Virginia Program Organizer. “As a small businesses executive, she has promoted energy efficient and environmentally sustainable development projects throughout the metro area while creating jobs and improving the region’s economy.” Learn more about LuAnn here and make sure to vote for her on November 8th.

Clean Water Action is very excited to be part of a new initiative: the Anacostia Park and Community Collaborative (APACC). APACC is a project of the Anacostia Waterfront Trust that involves more than a dozen community-based and citywide nonprofit organizations interested in working collectively to “catalyze and assist the transformation of the Anacostia River Corridor in the District of Columbia. The principal objective is to help to create a great socially and economically beneficial civic space, on a clean river, adjacent to healthy, green, diverse, and exemplary communities.”

In a changing city with a renewed focus on restoring the Anacostia River, Clean Water Action and APACC partners are working to realize a vision of improved parklands, with increased community access, for the benefit of long-term and current residents. To reach this goal APACC members will leverage their own capacity and engage members of the community to build a movement around these core objectives: 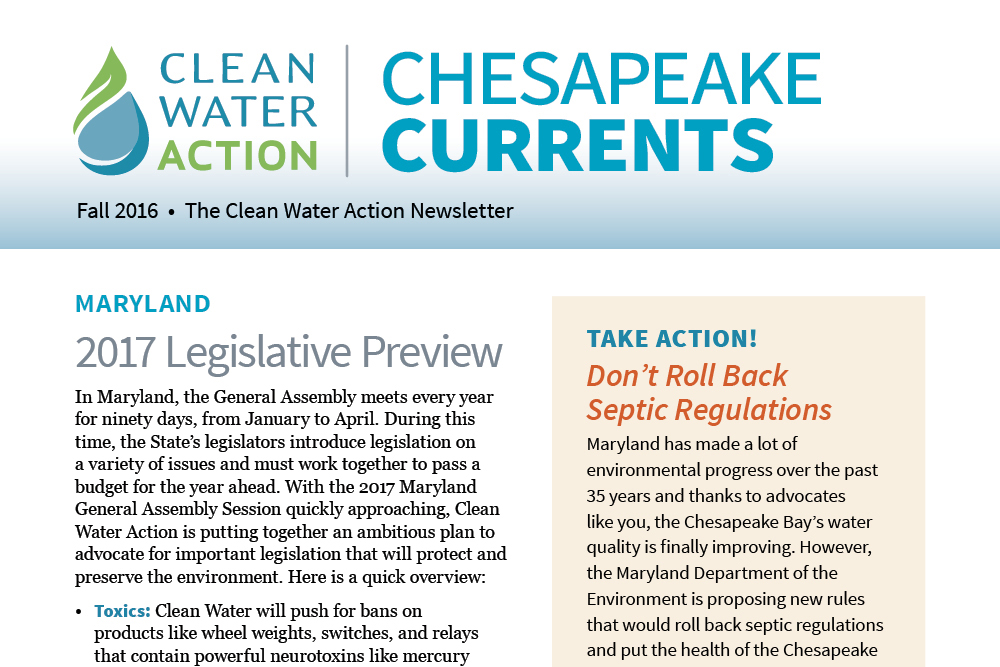 HB161 implements recommendations of the State Transparency and Accountability Reform Commission, a bipartisan commission convened in 2021 to review and investigate the operations and structures of quasi-governmental agencies in Maryland.

This report provides background information about the issue of sewage backups in Baltimore City and the existing assistance programs, summarizes and analyzes DPW’s feasibility study, and makes recommendations for improving and expanding the support systems for residents facing this environmental hazard.