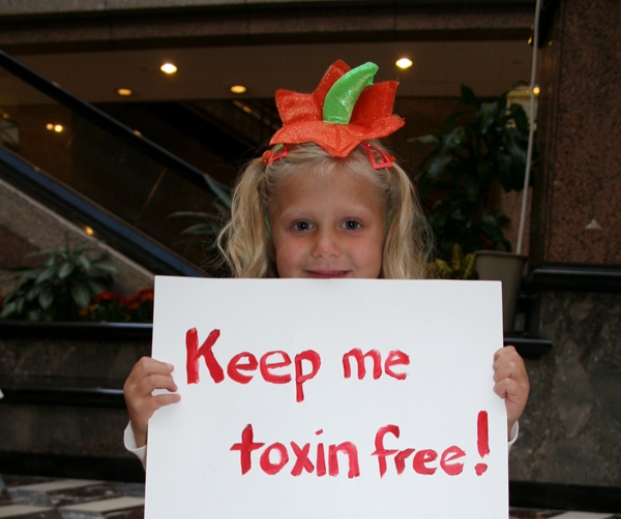 More than 80,000 chemicals are currently used in the United States, and most haven’t been adequately tested for their effects on human health. Toxic chemicals find their way into human bodies in a variety of ways – through the air we breathe, through direct contact with our skin, and through the food we eat and the water we drink. Safeguarding drinking water has been one of the largest public environmental concerns since Rachel Carson’s Silent Spring and the current Flint water crisis where over 100,000 residents were exposed to elevated lead levels.

There is currently a particular concern regarding the human health threats from toxic exposure to lead, a broad category of chemicals called PFAS found in everyday consumer items, and a plastics hardening compound called bisphenols.

Absorbed by sticking to red blood cells, then moving to soft tissue, then bones. Children display the strongest neurological effects to lead exposure, and it can change how the brain functions, how memory is stored, and can result in lower IQs, behavioral concerns, and learning disabilities. Lead exposure can lower a child’s IQ, affect brain and nervous system development, slow growth, and cause hearing and speech problems. There currently is no treatment for low levels of lead in the blood.

While lead is a naturally-occurring element found in trace amounts nearly everywhere, the soil near heavily used streets and roads may contain lead as a result of past use of lead in gasoline. Lead can also be present in the soil adjacent to houses with lead-based paint and may contribute to the high levels of lead in household dust.

Since the Flint water crisis began, several states have worked to create more awareness around preventing lead poisoning. Many states, the Environmental Protection Agency (EPA), and the Center for Disease Control (CDC) are working to lower the actionable threshold for lead in drinking water. Toxicologists agree that there is no safe level of lead, and many think that the threshold should be lowered to 10 parts per billion.

PFAS are synthetic chemicals found in many products, such as clothing, carpets, fabrics for furniture, adhesives, paper packaging for food, and heat-resistant/non-stick cookware. PFAS are linked to kidney and testicular cancers, hormone disruption, thyroid disease, reproductive disorders, infertility, low birth weights and even resistance to vaccines. They are found in fish, wildlife and humans; and because they don’t break down, PFAS accumulate in our bodies and the environment. This can be due to food that has been stored or cooked in materials containing PFAS, eating contaminated fish and shellfish, or by drinking contaminated water.

PFAS are also present in fire-fighting foams used by both civilian and military firefighters. People who live near PFAS production facilities or places where PFAS-containing firefighting foams were used are at higher risk of exposure from groundwater contamination. High levels of the contaminants from fire-fighting foam were discovered in 2017 in well water near a Naval landing field in Chesapeake, VA. A 2019 act to amend the code of Virginia relating to firefighting foam management didn’t absolutely require the phase-out of PFAS-containing firefighting foam and made it seem as though firefighters and how they are using the foam are the problem – not the inherent toxicity of the PFAS chemicals within the foam.

Washington and Colorado have passed full bans on PFAS in firefighting foam with a few exceptions. Lawmakers need to work toward a health-based limit on PFAS chemicals in products and drinking water and promote policies that help communities clean up contamination and hold polluters accountable.

Over the past decade, there have been concerns regarding the health effects of bisphenol A (a hardening chemical compound) found in many plastic products. Studies have shown that BPA exposure is linked to accelerated puberty and an increased risk of diabetes, cancer, and heart disease.

The FDA has stated concern in regard to the effects BPA has on children’s health and has acted to ban BPA in bottles and cups for children. Some states have established laws banning bottles and cups with BPA if designed for toddler and infant use or banning manufacture and sale of food containers that contain BPA.

BPA is often replaced with similarly dangerous chemicals which are often structurally related to BPA and have endocrine disrupting effects. BPA alternatives are not necessarily less estrogenic. In fact, three bisphenols (BPAF, BPB, and BPZ) are more estrogenic than BPA. Bisphenol F (BPF), Bisphenol S (BPS), and Bisphenol AF (BPAF) are among the main substitutes of BPA in polycarbonate plastics and epoxy resins. Numerous studies have suggested that BPS and BPF have potencies similar to that of BPA.

State leaders must take action on developing a safer Commonwealth free of toxic contamination. We cannot afford to be the next Flint, MI by allowing unjust environmental health hazards to impact communities for decades.