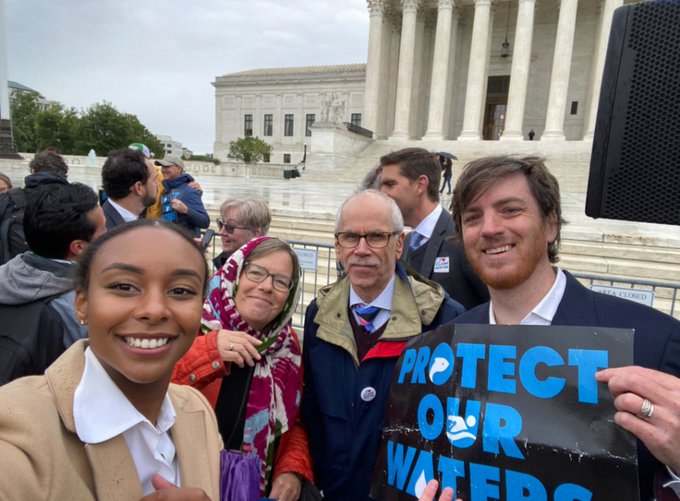 Both Clean Water Action and the Clean Water Act turned 50 this year. We wanted to share some highlights of all that we’ve been doing and accomplishing with help from members and donors like you. This post also includes links to three 1-minute "First 50 Years" videos produced as part of a longer series reflecting on Clean Water Action’s vibrant track record of success as we look ahead to the future.

Fifty years in, our vision remains focused on the goal of fishable, swimmable and drinkable water for all people and communities. While every year – including 2022 – has brought real progress, too many of us remain on the receiving end of too much pollution and the health harm and injustice that brings.

At the Forefront, For a Cleaner, More Just Planet -  Check out Video One - "First 50 Years" here.

We’ve helped secure commitments from the Biden administration to move forward with more protections for wetlands, small streams and sources of the water we drink. Between the Bipartisan Infrastructure Law and the more recent Inflation Reduction Act, and executive actions by the Biden EPA, the U.S. has taken bold steps to rebuild our aging water infrastructure, get lead out of our drinking water systems, and head off the worst effects of climate change by promoting clean energy. These are strong steps and will need to be defended and implemented in the months ahead, as the Court deliberates on a case that could sharply restrict protections for our water. Listen to Bob's remarks here.

Keeping Families Safe from Toxic Pollution
Lead drinking water pipes are bad for our kids and should be removed from all drinking water systems. Our grassroots lobbying helped get $15 billion included in the 2021 Bipartisan Infrastructure Law to help get lead out of contact with people’s drinking water. Now, we are working to make sure that money will reach the communities that need it most.

Toxic PFAS “forever” chemicals are found in tens of thousands drinking water wells around the country — and in food packaging, clothing, nonstick cookware — even dental floss! Clean Water Action helped communities use Clean Water Act and Safe Drinking Water Act tools to keep these chemicals out of our water. We’ve won increased federal research and action, with more to come.

We worked state by state in 2022 to win PFAS bans and phase-outs, so these dangerous chemicals will no longer be used in food packaging, firefighting foams, and children’s products. Victories in California, Connecticut, and Minnesota are already having a significant impact. Massachusetts and other states are poised for action in the coming year. Learn  more!

Advancing Climate Solutions
Climate change and clean water concerns are closely linked, and the pollution warming our planet, driving extreme flooding and drought also directly harms our water and people’s health. Clean Water Action pushed for federal action on climate, helping ensure that billions of dollars were allocated to fight climate change in the Inflation Reduction Act which passed in the summer of 2022. We helped fight pipelines and wastewater pits and other infrastructure that enables more oil and gas production. We also helped secure big climate policy wins in Massachusetts , New Jersey and Rhode Island — and have fought rollbacks of existing programs in Virginia and other states.

Fighting Wasteful Single-Use Plastic Throwaways
Our innovative ReThink Disposable program that helps businesses, institutions and governments save money and reduce waste by switching back to reusable items is poised for major expansions in California, Connecticut, Massachusetts, Minnesota, Pennsylvania and Rhode Island. Meanwhile we continued to make headway on new bans and phase-outs of wasteful products (disposable bags and to-go foodware) and practices in a number of states, along with zero-waste, “take- back” and “extended producer responsibility” policies.

Clean Water Action and Clean Water voters had a decisive impact in the 2022 midterm elections. Results from three of the states with our most concentrated voter education and mobilization efforts – Minnesota, Michigan and Pennsylvania – illustrate our impact. Minnesota and Michigan now have environmental majorities in their state governments. In Pennsylvania, in addition to contributing to environmental U.S. Senate candidate John Fetterman’s victory, environmental voters also helped change control and leadership in the state House. In these and other locations, often in very close races, our involvement helped secure wins for Clean Water Action-endorsed candidates up and down the ballot, spurred record youth registration and turnout, and demonstrated the power of our people-based community campaigning grounded in clean water, climate and environmental justice concerns.

Clean Water Action sent thousands of texts and email messages during the election season and knocked on doors across the country — 250,000 in Michigan alone.

Even outside of election season, we reach out to our members daily, helping them send tens of thousands of letters, postcards, emails and public comments at key moments to elected and appointed officials and decision makers at every level. This is how we win for our water!

As a Clean Water Leader, your generosity will enable our work protecting clean water, now and into the future. You will be invited to virtual donor briefings and events, have opportunities to meet our staff, and receive our thanks and gratitude for helping us achieve our goal of swimmable, fishable, drinkable water for all.
Learn More

For 50 years, support from our members and the public has powered our campaigns to protect clean water, safeguard our communities, fight the climate crisis, tackle the tsunami of single-use plastic pollution, and more. Your donation today ensures we can keep winning campaigns for our water!
Learn More