Be a Clean Water Voter: Endorsements for 2022

Voting, elections, and equitable representation are important — Clean Water Action has known and advocated for these convictions since 1972. Through diligent candidate interviews, research, and consultations, Clean Water Action Minnesota has prepared a voting guide for clean water and environmental issues. We endorse candidates who protect, advocate, and fight for clean water — individuals  fighting for a healthy future.

Clean Water Action endorsed candidates must have a strong record of going to bat for environmental issues and championing actions related to clean water and a healthy environment. We examine how they previously acted on environmental issues that we work on in Minnesota, including reducing toxic chemicals, protecting our water infrastructure and resources, addressing agricultural pollution, and addressing climate change issues and causes, as well as their overall platform and history.
We believe these candidates are all deserving of our endorsement and have earned the right to be called   Clean Water Champions. We encourage you to vote for candidates endorsed by Clean Water Action, and to support them in any way you can.

Talk to Candidates About PFAS

A package of eight bills to protect Minnesotans from PFAS pollution was introduced in the 2022 legislative session, and all but one made it into the final Environmental Omnibus bill in the House. Like most bills this year, it did not pass by the end of session. However, with the issue of these harmful “forever chemicals” continuing to gain visibility and concern, we expect to keep making progress on state policy next session.

All seats in the state House and Senate are on the ballot this year, so as you hear from candidates this election season, be sure to ask for their support and leadership on regulations and funding for PFAS prevention and cleanup. 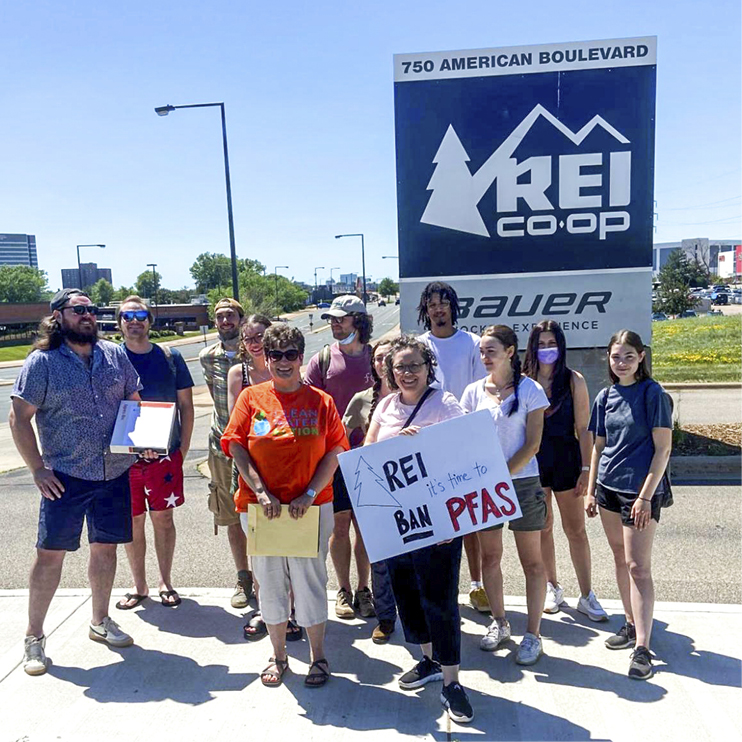 ▲In June, following REI’s annual member meeting where leadership failed to commit to banning PFAS in their products and packaging, Clean Water Action MN and the Healthy Legacy Coalition delivered more than 1,000 postcards from REI customers and members to the Bloomington store manager.

Make a Plan to Vote!

One of the most powerful ways we can have an impact and create lasting, systemic change is by passing laws and enacting policies to hold polluting corporations and industries accountable, and to clean up and prevent further pollution. All levels of government can have an impact on environmental policy, and this year the entire state legislature is on the ballot, along with statewide offices, and local races, depending where you live. This is an important opportunity to vote in an environmental majority in the legislature.

Make a plan now for how you will cast your ballot, starting with checking your voter registration at mnvotes.org. In Minnesota, you can vote early (Friday, September 23 through Monday, November 7), in person, at the early voting site in your city or county, or by requesting a mail-in ballot that can be sent back or dropped off at the same site. Some people also like to vote at their local polls on Election Day, Tuesday, November 8th. Whatever works best for you, make a plan to vote, and make sure you make your voice is heard during these important elections.

The East Phillips community has some of the worst air quality in Minneapolis, resulting in the highest rates of asthma and heart disease in the state. The neighborhood continues to experience the cumulative effects of decades of pollution, due to the siting of numerous polluting industrial facilities directly in their community. State law has recognized how severe the situation is in East Phillips, even going so far as to prohibit new MPCA permits “without analyzing and considering the cumulative levels and effects of past and current environmental pollution from all sources on the environment.”

Despite East Phillips being designated as an environmental justice community, the City is currently planning to site a major new municipal project in the heart of their neighborhood. This development, known as the “Hiawatha Campus Expansion Project,” would add unnecessary pollution to an already overburdened area. This is a clear instance of environmental racism. The East Phillips Neighborhood Institute (EPNI) has been leading the charge to negotiate with the City and prevent further pollution while pushing for their alternative vision for the site, a community owned indoor urban farm.

The Hiawatha Campus Expansion Project would tear down the Roof Depot building and construct a new public works facility that would house water distribution and storm sewer operations, a refueling station, and a large fleet of City vehicles and heavy diesel equipment. Community members have long called out the health and environmental justice impacts of the City’s industrial project on the lowest-income neighborhood in Minneapolis, where the majority of residents are Indigenous and people of color and which was declared a federal “residential arsenic Superfund site” in 2000. The City’s plan would bring even more pollution to this highly overburdened community.

Most recently, the City and EPNI have begun the process of negotiating a settlement agreement, after the community sued the City over the environmental racism of this project. EPNI and allies are still working to pressure the City to relent, but the City is planning to move forward with a vote to begin demolition of the Roof Depot building, without a clear plan to mitigate the arsenic contamination that would spread throughout the neighborhood. We are seeing a clear example of those in power deeming a community expendable.

Clean Water Action Minnesota will continue to stand with the East Phillips community to fight for environmental justice, and the right to a safe and healthy community. The City cannot begin to address past environmental racism if they are still making the same decisions today. East Phillips deserves environmental justice, and reparations for the many decades of pollution and oppression they have faced. Yet, the struggle continues to stop more pollution from being dumped on them. 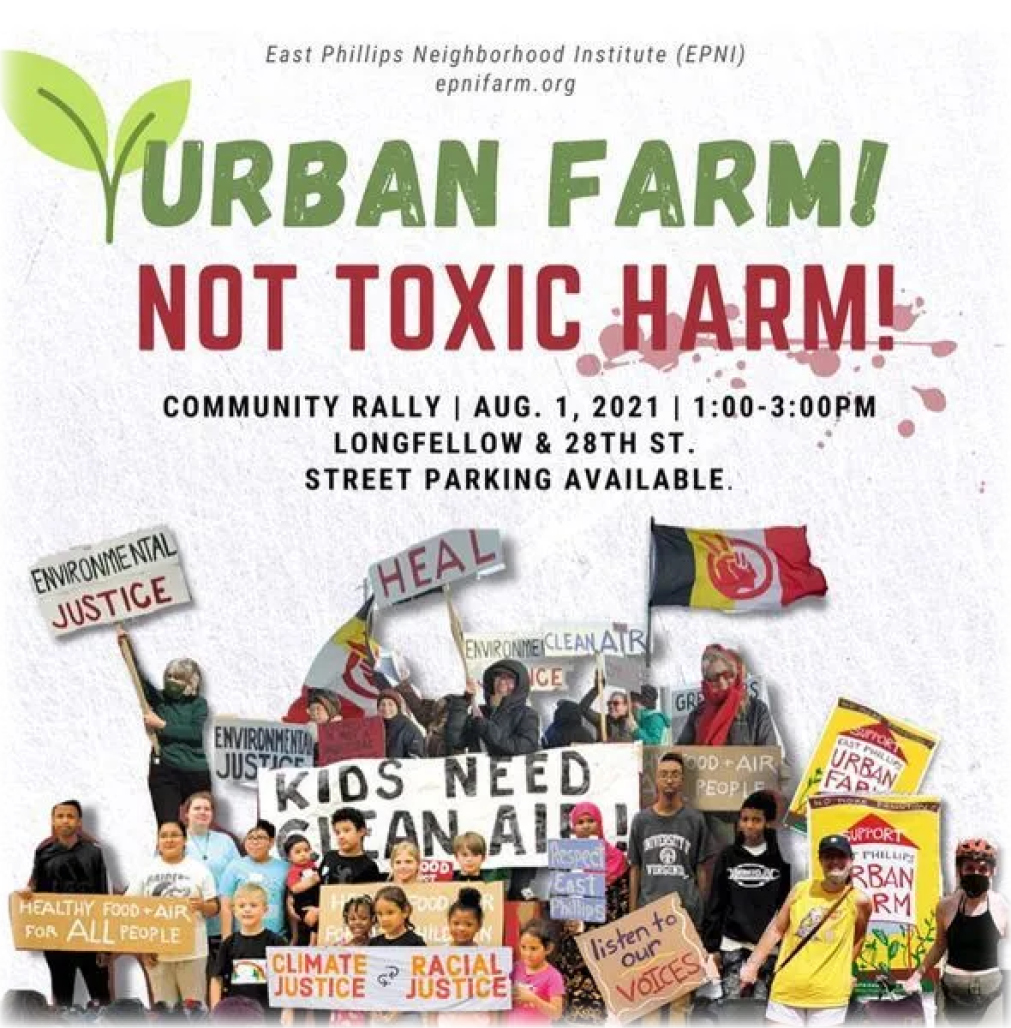 ▲For years, the residents of the East Phillips neighborhood in Minneapolis have fought against city plans to add more pollution to their already overburdened community, taking a stand for environmental justice.

In July, Congress passed the 2022 Inflation Reduction Act (IRA) which will provide a big boost to sustainable agriculture programs that farmers count on to build climate resilience. The IRA also makes contradictory changes to previous legislation supporting farmers, and people of color.

Support for sustainable agriculture and the U.S. Department of Agriculture in the IRA includes:

However, despite funding increases for USDA programs focused on climate protection, the Inflation Reduction Act also alters language to determine who gets funding. The legislation repeals and replaces section 1005 of the American Rescue Plan Act of 2021 (ARPA) which allocated funds to relieve the debt of farmers of color. The IRA changes the definition of “socially disadvantaged farmers,” defined in the act as farmers who have been subjected to racial or ethnic prejudice, to “economically distressed farmers” of any race “whose agricultural operations are at financial risk.”

Farmers of color have been historically discriminated against by the USDA, causing people of color to make up a mere 4% of farmers in Minnesota. Since ARPA was passed in March 2021, the funding has fallen into legal limbo due to multiple lawsuits from banks and from white farmers alleging discrimination. In addition to changing the overall definition of need for the total $3.1 billion, the IRA allocates $2.2 billion for farmers who have experienced discrimination, and can prove it.

We encourage you to join us in keeping the upcoming 2023 Farm Bill on your radar and pressuring legislators to prioritize sustainable and racially just agriculture funding as much as possible. Every five years, the federal and state Farm Bills are revised by legislators, allocating billions in funding for Supplemental Nutrition Assistance Programs (SNAP), school lunch programs, Women, Infant, and Children programs (WIC), corn and soy (for food, feed, and industrial uses), vegetables, fruit, dairy, beef, pork, chicken, and tobacco, just to name a few. Ultimately, the quinquennial Farm Bills determine how our food system and environment operate and interact by deciding how much, and how to use USDA funding.

The Farm Bill has the power to dramatically improve our food systems, health, and climate by promoting methods like cover crops, organic and regenerative agriculture, improved food distribution, and refusing synthetic agriculture inputs (fertilizers, pesticides, herbicides, fungicides, and even PFAS). The time is now to systematically increase climate-friendly agriculture and food production while ensuring equitable land access and economic power for Black, Indigenous, and People of Color.

Following months of engaging Minnesota residents, there is strong support for our call on Minnesota grocery stores to provide more sustainable and equitable meat and seafood options. Clean Water Action Minnesota has delivered the Field to Fork call for more sustainable and equitable meat and seafood to Cub Foods, Hy-Vee, Lunds & Byerlys, SuperOne, Jerry’s Foods, Kowalski’s Market and Target. Those in control of our food choices have an opportunity to act on consumer demand in Minnesota for:

After receiving 885 signatures of support, we have delivered our petition to grocery stores calling for better certifications that can help protect people, water, and soil quality:

Nearly a thousand Minnesota community members joined us in calling for better poultry, beef, pork, and seafood by signing the petition. These certifications stand for cleaner water, healthier soil, and absence of toxic additives. We are awaiting responses from Minnesota’s top grocers, and will update our members as soon as further discussions are had. These important decision makers in our food system should take this opportunity to support a more sustainable climate.

The Line 3 pipeline expansion has been one of the biggest environmental issues in Minnesota for years, and in 2021 construction of the project was completed. It was clear that Enbridge was working to finish as fast as possible, which led to a number of construction anomalies and destructive incidents. This includes multiple breaches of underground aquifers, which have led to millions of gallons of fresh water being lost. The first breach occurred over a year and a half ago, and while Enbridge stated they had fixed the problem, in July 2022 it emerged that one of the aquifers was still leaking water. 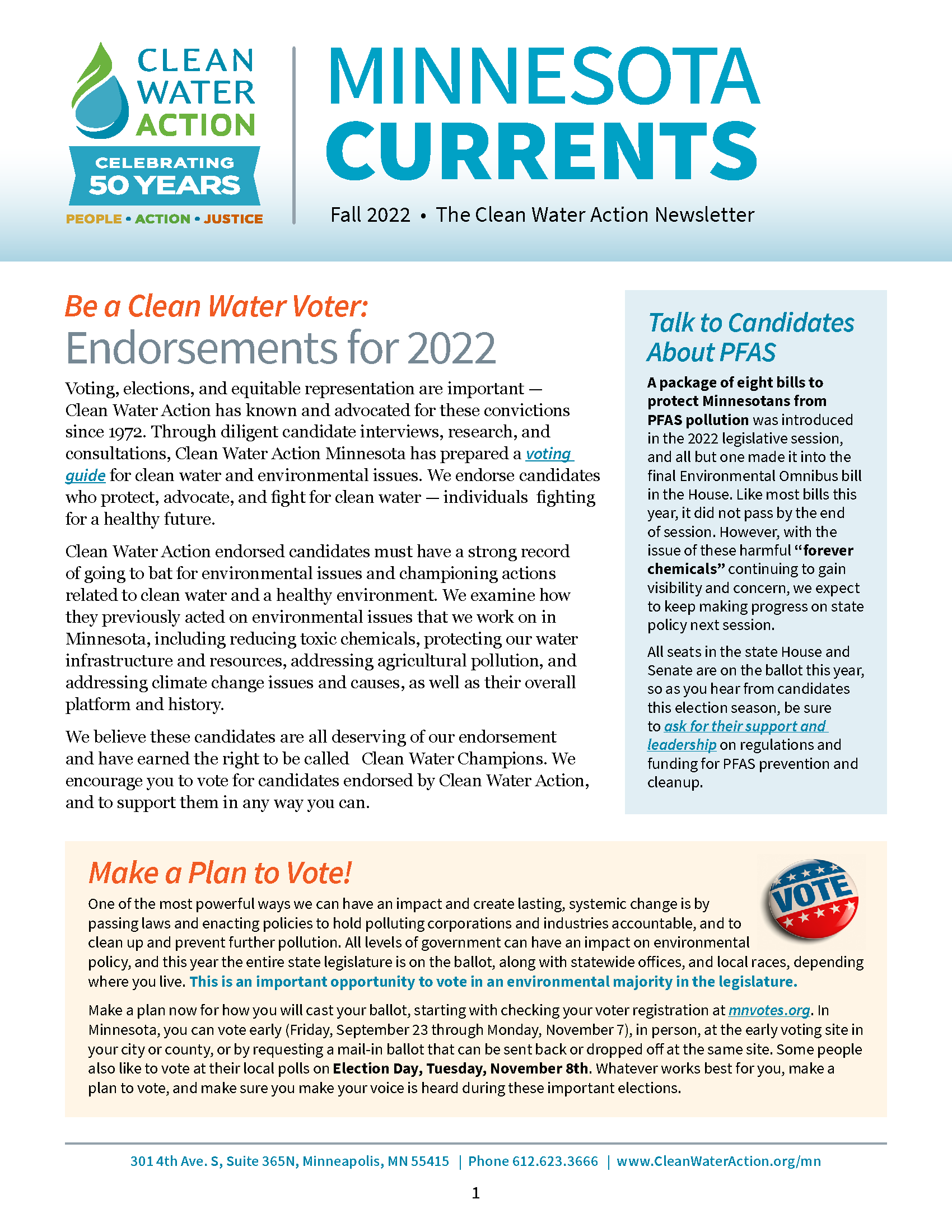 To protect current and future generations from harm Minnesota should take immediate action to stop the use of PFAS in a wide array of products. Clean Water Action and the Healthy Legacy Coalition are supporting the 2023 Minnesota PFAS Prevention Package which includes Information Disclosure, PFAS Non-Essential Use Ban, and Firefighting Foam Loophole Closure.