Big Changes Mean It Is Important to Vote!

Election Day is November 8th and big changes are coming as a result of redistricting and massive retirements from the state legislature. Every race will be important, but this year, Clean Water Action’s non-partisan Vote Environment (CWAVE) committee endorsed candidates in a few key races that are now open seats or where we need to fight off extremist anti-environment candidates.Check out our list below. Here’s our list, but to learn more about the election in general, and to discover more about these candidates in particular, go to cleanwater.org/voteCA.

Fresh new voices for the environment:

Make Sure You Are Prepared to Vote!

Go to www.sos.ca.gov/elections to register, check your status, find out where to vote in person, and find basic information about the election. 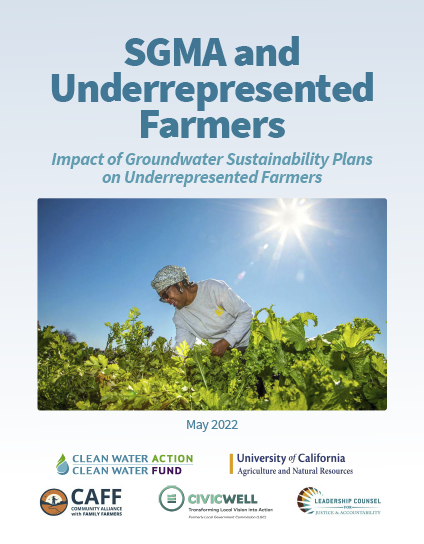 This summer, Clean Water Action co-authored a report evaluating how our groundwater resources are being protected (or not!) in California. The findings in SGMA and Underrepresented Farmers serve as a wakeup call to the state to get serious about groundwater management. In collaboration with other environmental justice organizations, we are prioritizing the consideration and protection of vulnerable communities through research and participation in local groundwater management.

Almost a decade ago, the state of California passed the Sustainable Groundwater Management Act (commonly referred to as SGMA), intended to bring groundwater resources to sustainability within a 20-year timeline. The realization of this promise is key for communities reliant on small water systems and domestic wells for their drinking water — communities that are often disproportionately impacted by unsustainable groundwater management because of their shallow wells. Despite this hard-won legislation, hundreds of wells in counties like Fresno, Madera, Tehama and others have gone dry so far this year.

Over the last 2 years, Clean Water Action has reviewed and analyzed over 95 groundwater sustainability plans, in every groundwater basin covered by SGMA, closely evaluating the steps local agencies are taking to protect vulnerable communities. The result of our analysis has shown that there is more work to be done. Significant gaps exist in most plans over identification of disadvantaged communities, engagement of vulnerable stakeholders, and measures to protect their water supplies. 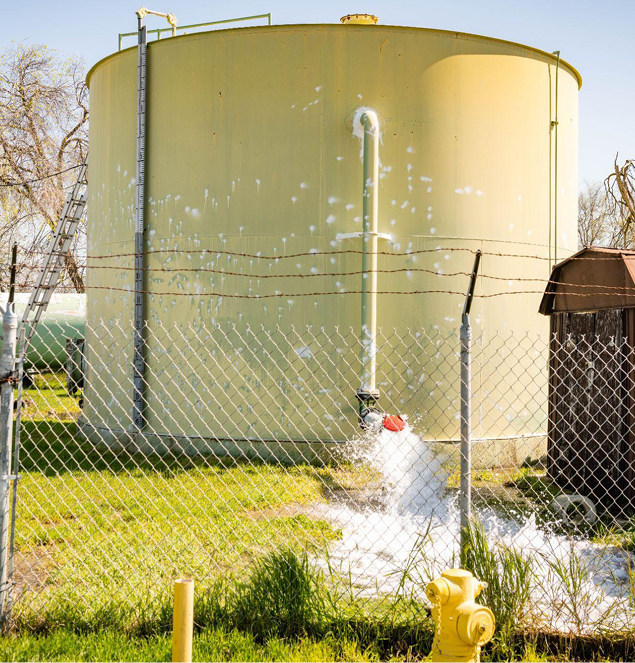 Given the increasing number of small water systems and domestic wells going dry, and communities left without drinking water year after year, consideration of these communities should be a priority for the local groundwater agencies and the state. The administration took an initial step this spring, issuing a Drought Executive Order that requires county well-permitting agencies to coordinate the issuance of new well permits with local SGMA plans. Before this order, counties placed no limitations on the issuance of new well drilling permits. Legislation to make the executive order permanent (AB 2201, Bennett) died in the legislature, but will be introduced again in 2023.

In this new report, we call on the California Department of Water Resources (DWR) to assume its role as the arbiter of groundwater in the state and to ensure that drinking water users are engaged and protected. Our recommendations will help keep the water flowing in vulnerable households around the state.

Clean Water Action won some big victories at the end of the legislative session this August:

After four years of advocacy, fenceline communities finally achieved their very modest goal of ensuring a health and safety buffer zone to protect them from toxic contaminants that plague their communities.

Thanks to a final push from Governor Newsom’s office, state Senators Monique Limón and Lena Gonzales were able to push SB 1137 through the California Legislature in the final hours of the 2022 legislative session, after two prior attempts were foiled by the powerful and well-funded oil industry lobby.

More than 7.5 million Californians live within a mile of oil and gas production; oil extraction is an urban experience in Kern and Los Angeles counties. The majority of these residents are low income families of color. Oil producers and their supporters have long justified these communities as sacrificial zones to society’s demand for oil and gas. But that’s not a sacrifice we should ask anyone to make. These families suffer from a variety of pulmonary and cardiovascular diseases, constant headaches, nosebleeds, dizziness and irritation of the nose, eyes and skin. This impact is exacerbated near sensitive receptors like schools, hospitals, clinics and neighborhoods where children, the elderly, and those with health conditions are more susceptible to the toxic air produced by oil and gas production. To add insult to injury, the continuous vibration of nearby machinery makes it virtually impossible to hang family portraits on the walls as the rumbling shakes their homes and knocks the portraits down.

California has long been one of the few, if not the last, of the oil producing states without a buffer zone. Texas, Oklahoma and Colorado all have state mandates protecting sensitive receptors from oil and gas production.

This buffer zone will prevent any new or renewed oil production from taking place within 3200 feet of any sensitive receptors. This distance was determined in a report from a public health panel put together by the California Geothermal Energy Management (CalGEM) Division that was tasked with developing health protective regulations to protect fenceline communities from the the impacts of nearby oil and gas operations.

Thank you for your unwavering support of this effort. You have sent letters, emails and made phone calls every time we asked — during each legislative effort, during regulatory processes and directly to the governor. By taking action, you have helped protect your fellow Californians. 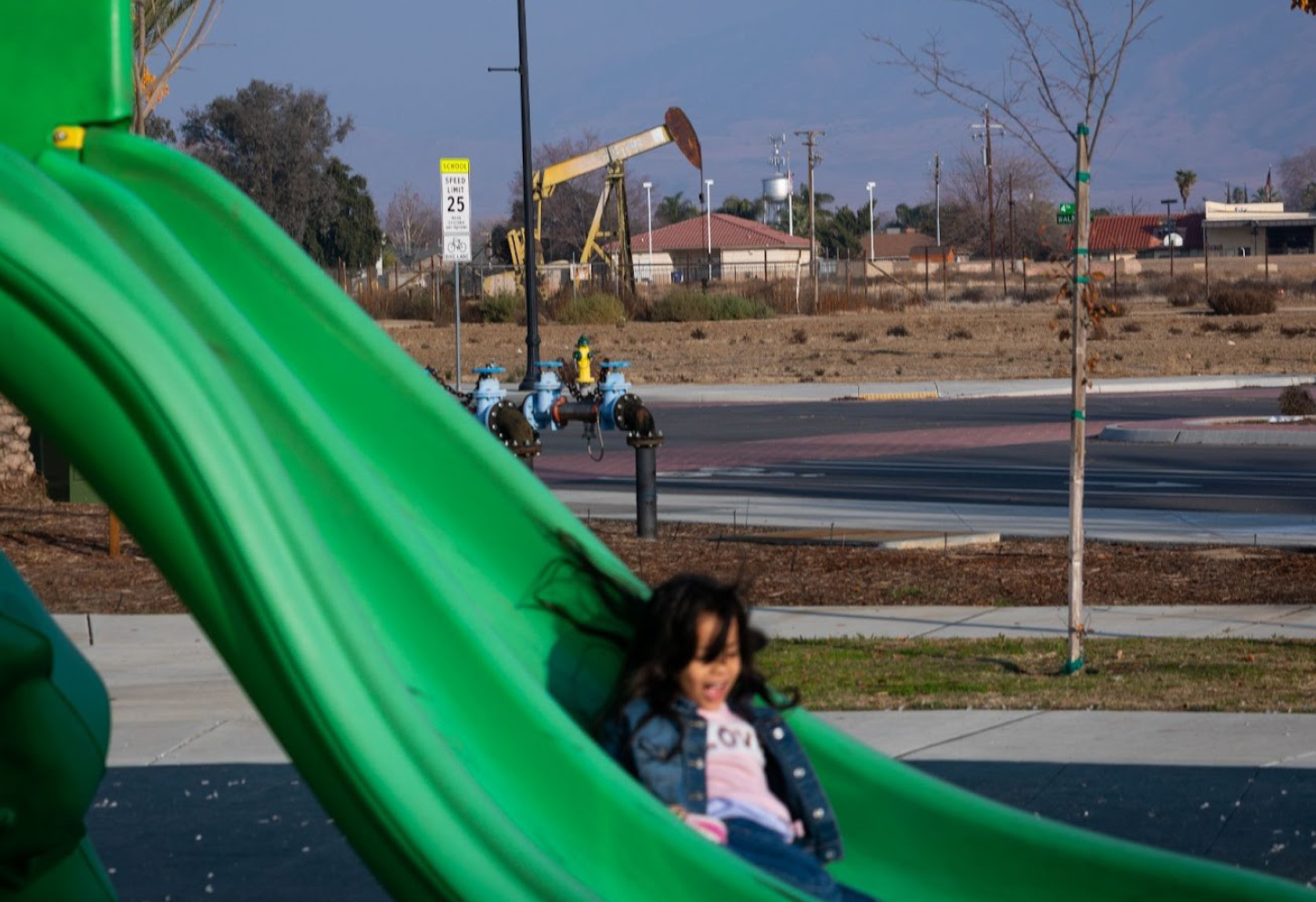 ▲ No child should have to play next to a polluting oil well.

The world produces 380 million tons of plastic every year. Up to 50% is for single-use purposes, equivalent to the weight of more than 520 Empire State Buildings! Since 2011, ReThink Disposable has helped food service providers shift away from single-use, to reusable foodware. Collectively, we prevent in excess of 22 million pieces of single-use packaging annually from ever needing sorting, landfilling, incinerating, or capturing. We need to bring this critical work to scale in order to match the level of the plastic pollution crisis.

We’re thrilled to report that Clean Water Fund’s ReThink Disposable program has been awarded a National Oceanic and Atmospheric Administration Marine Debris Pollution Prevention Grant to launch ReThink Disposable in 7 of our Clean Water Action offices along the East coast and Great Lakes. This two-year project starts October 1st, with a primary goal of transforming 150 restaurants and 3 large institutions, and building out a national training program to mentor others working to reduce plastic pollution in their communities. Clean Water Fund and the ReThink Disposable Program are on the way to annually reducing and eliminating almost 30 million pieces of single-use food and beverage packaging by 2024. 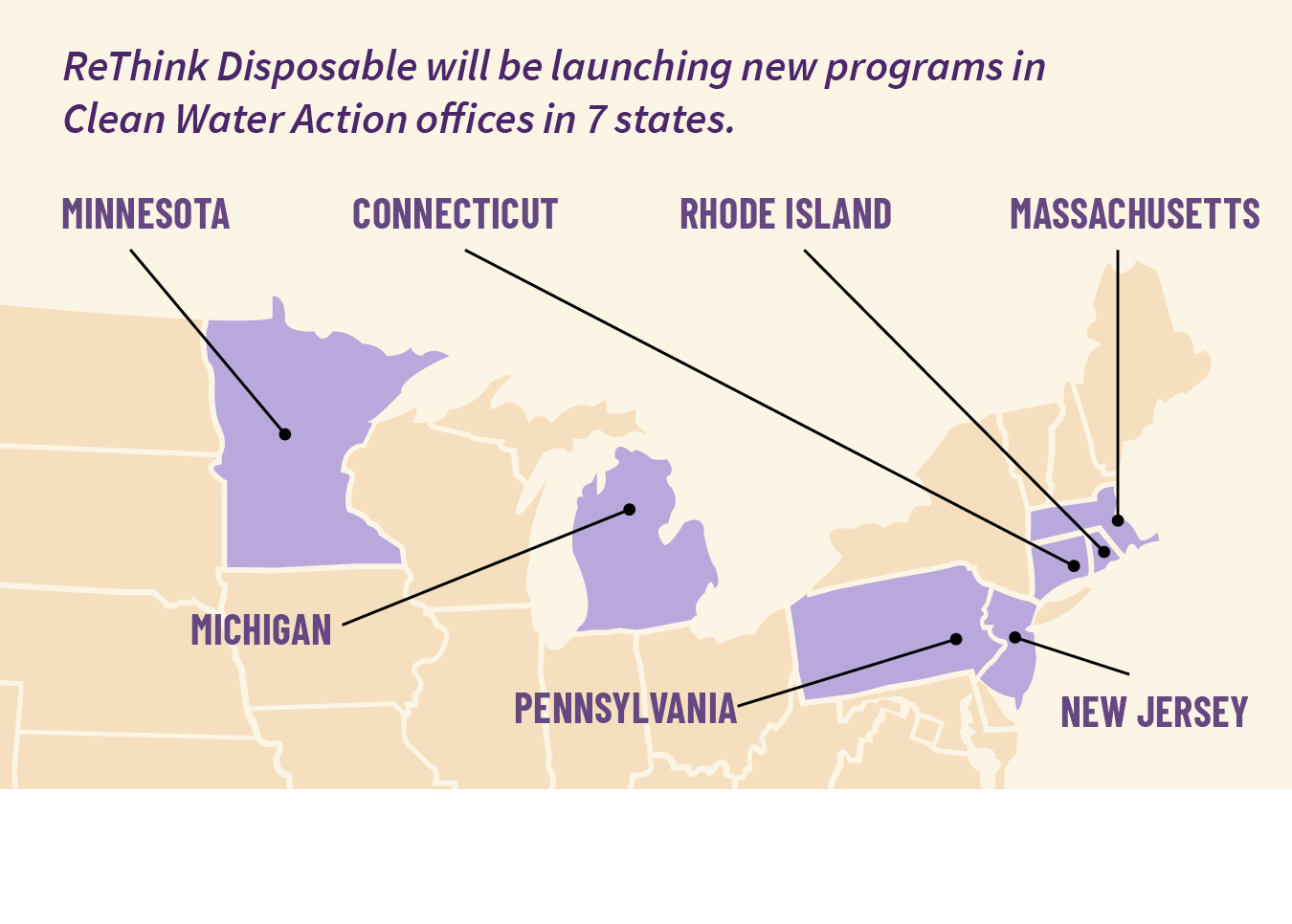 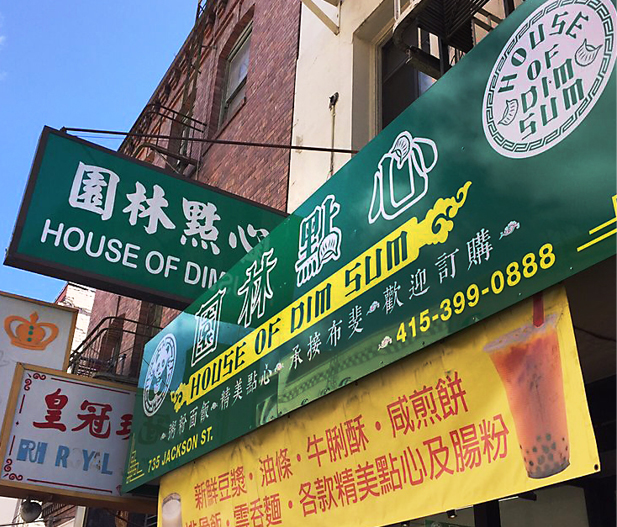 ReThink Disposable has long partnered with the City of San Francisco to help restaurants replace single-use foodware with cost-saving and planet-friendly reusable foodware. A recent champion is the House of Dim Sum in San Francisco’s Chinatown, which spent thousands of dollars weekly  on disposable foodware.

After receiving technical assistance and fiscal support, the restaurant has eliminated 2.2 million disposable items every year. That’s more than seven tons of trash that won’t exist — the weight of a San Francisco cable car! An upfront investment of just $429 for durables will save $33,561 per year.