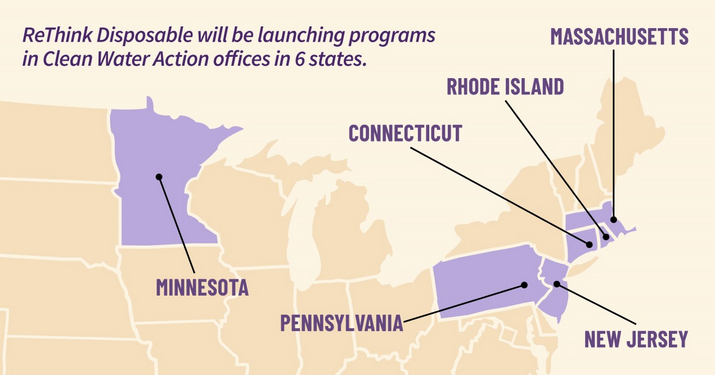 The world produces 380 million tons of plastic every year. Up to 50% is for single-use purposes, equivalent to the weight of more than 520 Empire State Buildings! Since 2011, ReThink Disposable has helped food service providers shift away from single-use, to reusable foodware. Collectively, we prevent in excess of 22 million pieces of single-use packaging annually from ever needing sorting, landfilling, incinerating, or capturing. We need to bring this critical work to scale in order to match the level of the plastic pollution crisis.

We’re thrilled to report that Clean Water Fund’s ReThink Disposable program has been awarded a National Oceanic and Atmospheric Administration Marine Debris Pollution Prevention Grant to launch ReThink Disposable in 6 of our Clean Water Action offices along the East coast and Great Lakes. This two-year project starts October 1st, with a primary goal of transforming 150 restaurants and 3 large institutions, and building out a national training program to mentor others working to reduce plastic pollution in their communities. Clean Water Fund and the ReThink Disposable Program are on the way to annually reducing and eliminating almost 30 million pieces of single-use food and beverage packaging by 2024.

These projects will improve habitats and other ecological resources, and help build a foundation of knowledge and resources to change behaviors, raise awareness, and promote the long-term prevention of marine debris. All of the projects also incorporate justice, equity, diversity, and inclusion components, including working with tribal, environmental justice, and fishing communities that traditionally have been underserved due to lack of economic opportunity and language barriers. The NOAA Marine Debris Program is proud to support impactful, community-driven, and cost-effective projects.

ReThink Disposable has long partnered with the City of San Francisco to help restaurants replace single-use foodware with cost-saving and planet-friendly reusable foodware. A recent champion is the House of Dim Sum in San Francisco’s Chinatown, which spent thousands of dollars weekly  on disposable foodware.

After receiving technical assistance and fiscal support, the restaurant has eliminated 2.2 million disposable items every year. That’s more than seven tons of trash that won’t exist — the weight of a San Francisco cable car! An upfront investment of just $429 for durables will save $33,561 per year.

With support from ReThink Disposable, the House of Dim Sum restaurant eliminated 2.2 million disposable items from their yearly supply costs - an upfront investment of just $429 that will save $33,561 per year.
Learn More