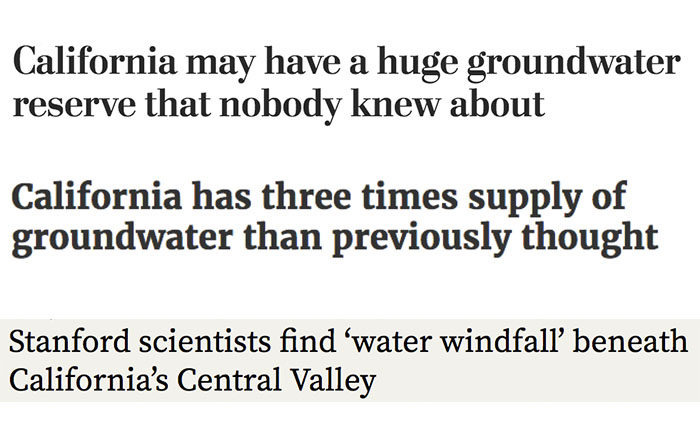 Headlines are funny things. They exert a pull that forces us to follow their lead into a story, even though the story itself may be dry and mundane.

The three headlines above represent stories published last week to highlight a study by two Stanford researchers who were researching water quality and quantity beneath California’s major oil fields. The Stanford investigation showed large quantities of water that had not previously been quantified because of their depth and salinity and also identified a threat to these reserves from current oil and gas production. What the study did not find, however, is a silver bullet that makes California’s water crisis any less urgent.

While these headlines are definitely sensational, they go well beyond the findings of the research. The Stanford study conducted an assessment of the quantity and quality of water found more than 1000 feet below the surface of existing oil and gas fields, found a large amount of water of varying quality, and identified ongoing oil and gas operations as a potential threat to those water supplies. Oil and gas companies have been allowed to operate in relatively high quality aquifers in California and around the country thanks to preferential treatment under the federal Safe Drinking Water Act, and failures by state regulators to enforce protections have put numerous California aquifers at risk. The study identified large numbers of oil and gas wells that operate in these “freshwater” zones, especially in Kern County, where more than 15% of oil activity occurs directly in the aquifers in question.

But the talking points that emerged go well beyond the data in the paper. The authors venture beyond the boundaries of their research by making the statement, which turned into the basis for the headlines: “Accounting for deep (but relatively fresh) groundwater can substantially expand California’s groundwater resources, which is critical given the state’s current water shortages.”  This extrapolation of their data ignores the actual nature of the state’s groundwater problems and the need for sustainable groundwater management.

To their credit, many of the news articles on this report identify concerns about the new water supply. First, no matter how much groundwater is left, the fact is that California is using far more groundwater than is replenished each year, and overdraft has accelerated since 2000. That’s not sustainable, and the  suggestion that these supplies could somehow ameliorate the current problem indicates  a disconnect  from the current groundwater situation. Second, groundwater levels in some regions of the state have already dropped hundreds of feet during this severe drought, leaving thousands of domestic wells and hundreds of irrigation wells dry. A homeowner or small farmer doesn’t have the money to a) drill a well up to a mile deep in search of water; b) pay the electric bill to pump the water to the surface, or c) pay for the expensive treatment of the “fresh” water that would be needed to remove heavy metals and salt.  Continued lowering of groundwater levels will destroy more small rural communities, and exacerbate the already disproportionate impacts of the drought on disadvantaged rural communities.

Despite the impression from the headlines that our water supply issues could be solved with this windfall, we must not lose sight of the tasks at hand, which range from protecting potential drinking water sources from polluting industries like oil and gas, to funding access to safe drinking water for small water systems, to reining in the over-pumping by agriculture that has depleted aquifers across the driest parts of the state.

It’s nice to know that California has significant reserves of groundwater; it would be better if we never had to use them.