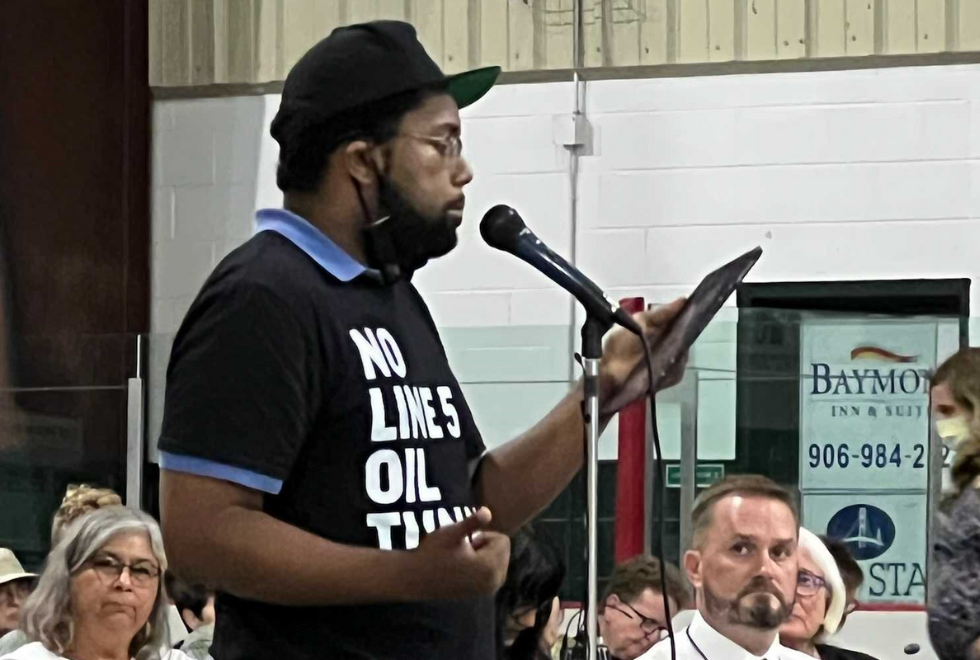 The U.S. Army Corps of Engineers (USACE) is continuing work on the Environmental Impact Statement (EIS) for the proposed Great Lakes Tunnel permit. Clean Water Action opposes the proposed tunnel project, which would put the environmentally and culturally important Straits of Mackinac at serious risk to benefit a tar sands pipeline at a time of climate emergency. We are asking the USACE to thoroughly review the potential environmental impact of the proposed tunnel before making their permitting decision.

Several Clean Water Action staff, members, and allies from the Oil and Water Don't Mix coalition traveled to St. Igance in Michigan's Upper Peninsula on Thursday September 8th 2022 to deliver their comments in person to the USACE. The following statement was prepared and delivered by our Southeast Michigan Program Organizer Erik McCleary.

Thank you for allowing me the opportunity to comment today. My name is Erik McCleary, I’m the Southeast Michigan Program Organizer for Clean Water Action. We represent over 135,000 Michigan residents who value our Great Lakes and don’t want to see them continue to be put at risk for an oil company’s profits.

I urge the Army Corps of Engineers to take a broad view of Enbridge’s tunnel proposal. A project of this magnitude must be carefully reviewed and other agency reviews including Michigan Dept of Environment Great Lakes and Energy and Michigan Public Service Commission have not considered all of the pertinent details and possible outcomes of this proposal. The Army Corps must conduct a more thorough and expansive review otherwise this project could avoid necessary regulatory scrutiny.

First, the Army Corps must conduct a complete, prudent, and feasible Alternatives Analysis, taking into consideration the fact that Enbridge’s own experts have shown through studies filed in Bad River Band of Lake Superior Chippewa v Enbridge that the tunnel and the existing Line 5 pipeline are unnecessary. Safer transport options are readily available, such as utilizing the excess capacity that exists within the pipeline system, and very limited truck and rail transport. To bring this issue down to the existing pipeline vs the tunnel as the only two alternatives would be disingenuous and would not serve the public interest.

Second, the Army Corps must fully consider the cumulative impacts of this project including all climate impacts; upstream impacts of drilling this oil, downstream impacts of refining it, and the total impact of keeping this pipeline functioning and building new infrastructure vs. utilizing existing capacity within the pipeline network and limited use of other transport options. In the MPSC contested case, experts concluded that this project would come with the additional Green House Gas emissions of roughly 27 new coal-fired powerplants annually.

Further, the Line 5 tunnel proposal is not happening in a vacuum. At the same time that Enbridge is seeking approval for this, they are also seeking approval to reroute Line 5 through northern Wisconsin where they are currently trespassing on Bad River reservation lands. This EIS should also include the proposed reroute to avoid improper segmentation of these closely related projects which are proposed for the same pipeline. If Army Corps fails to consider these proposed projects together, you will open the door for appeals to your permitting decisions based on lack of full consideration of cumulative impacts.

There are many other factors that ought to be considered in the Environmental Impact Statement for the Line 5 tunnel, and we will provide more details on those in substantive written comments at a later date.

In conclusion, a proposal of this magnitude, including such a high risk of damage to an ecosystem as sensitive as the Straits of Mackinac, deserves the utmost scrutiny from Army Corps. Limiting the Corps’ review of this proposal in any way would constitute a breach of the public trust and would be contrary to the public good that you seek to serve. Thank you.