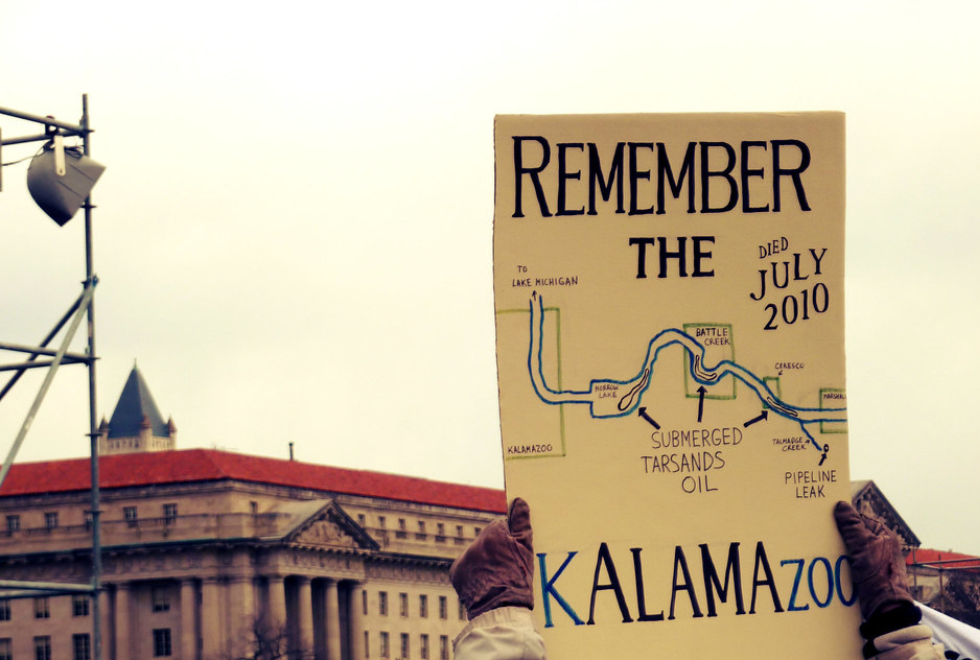 Twelve years ago today, on July 26th 2010, Enbridge Line 6B burst in the Talmadge Creek in one of the biggest inland oil spills in US history. The creek spills into the Kalamazoo river. Those in the area knew something was wrong and 911 calls came in alerting about a strong odor - a caller stating it smelled like "natural gas or crude oil". Children and then adults fell ill with nausea, headaches, and skin problems. Alarms had sounded in Enbridge headquarters in Edmonton, but were misinterpreted as anomalous pressure readings possibly caused by a bubble in the line.

17 hours after the rupture, a Michigan utilities employee saw and reported spilt oil and a rushed response finally began.

Enbridge misread their own safety equipment and increased the pressure in a broken Line 6B, spilling over 1.1 million gallons of tar sands into Talmadge Creek and the Kalamazoo River. Line 6B spilled for 17 hours before Enbridge finally shut down the pipeline in one of the largest inland oil spills in US history. Talmadge Creek is just a few feet across, and most of the million gallons went straight into the river. Residents were forcibly evacuated. Booms and skimmers were deployed to keep the oil from traveling further down the river. Animals from geese to muskrats and turtles were pulled and deer that couldn't be caught and rehabilitated were shot. First responders who went to get medical treatment couldn't tell doctors what they were exposed to because that was "proprietary information".

On July 28th, the spill was contained. The damage covered over 35 miles from Marshall to Comstock, and the spill was stopped just 80 river miles from Lake Michigan. Habitats were destroyed. Cleanup and restoration efforts took 5 years. National Transportation Safety Board (NTSB) Chair Deborah Hersman asked the question every Michigander was thinking: "Why didn't they recognize what was happening, and what took so long?".

NTSB investigators determined that the six-foot gash in the pipe was caused by a flaw in the outside lining which allowed the pipe to crack and corrode. Enbridge actually had learned that this section of pipe was cracked and corroding in 2005, five full years before the Kalamazoo oil spill. That same 2005 internal report pointed to 15,000 defects in the 40-year-old pipeline. And Enbridge decided to not dig and inspect the line.

In 2010, shortly before the spill, Enbridge testified in Congress that Line 6B was in good condition, despite the fact that they knew cracks had formed in the pipeline coating. These cracks ultimately caused the spill, just ten days later.

After Line 6B ruptured, Enbridge employees ignored their own safety response protocols - allowing even more oil to escape into Michigan waters.

In July 2016, Enbridge agreed to pay $177 million in penalties and improved safety measures in a settlement with the U.S. Justice Department and the Environmental Protection Agency - but problems persist.

Before Line 6B broke, pipelines had played only a minor role in conversations about Michigan’s environment and Great Lakes. Since then attention has turned to other potential dangers - and just as Enbridge ignored red flags about the condition of Line 6B, the same has happened on Line 5.

Line 5 is actually two 67 year old pipelines, 20 inches in diameter, that cross from Michigan's upper to lower peninsula at the Straits of Mackinac, where Lakes Huron and Michigan meet. The flow of water back and forth in the Straits is a turbulent current with a greater flow than Niagara Falls - it's the worst place in the Great Lakes where an oil spill could occur.

Enbridge’s pipelines, which run about 1,000 feet apart at depths ranging from 100 - 270 feet, have laid on the bottom of the Straits for . From corrosion to unsupported sections of pipeline, the same disregard for safety and lack of transparency that caused the Kalamazoo Oil Spill can be seen.

On April 1, 2018 a vessel anchor struck Line 5 in the Straits of Mackinac, causing three large gouges in the pipeline. Enbridge control systems didn’t detect the anchor strike, and despite not having video evidence of the pipeline’s condition for over two weeks, Enbridge never shut the pipeline down.

These are just a few of the issues that have plagued Line 5 - click here for a full timeline.

Learning From The Past

Line 5 has already spilled one million gallons over the six decades it has been in operation. Every day that Line 5 continues to operate, our water is at risk and the future of the Great Lakes hangs in the balance. Just like in 2010, Enbridge has continually spread disinformation and ignored reports from their own experts. The truth of the matter is that Line 5 is outdated, and unnecessary. Enbridge’s own experts have testified in court that shutting down Line 5 would have virtually no impact on domestic oil supply or prices.

Our future is fresh water, not fossil fuels.

What You Can Do

Send a message to President Biden today and ask him to use his authority to shut down Line 5.

Sign up for weekly updates from the Oil and Water Don’t Mix Coalition on actions you can take and volunteer opportunities.

Finally, please support our work in Michigan to protect clean water and Shut Down Line 5. Our Great Lakes are too important, and we won’t stop until this threat is gone.