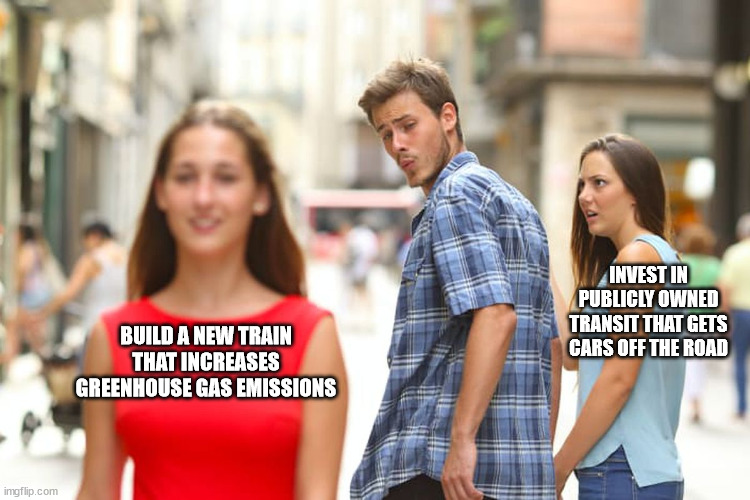 For the past several months, the Federal Railway Administration and Maryland's Department of Transportation were accepting comments from the public on the Draft Environmental Impact Statement (DEIS) for the Baltimore-DC MAGLEV project. During that time, 193 of our members submitted comments in favor of the No Build option. Although we're big supporters of public transit for the climate, air quality, and equity improvements it brings, the details of the MAGLEV project have too many costs for the climate, for actual public transit, for local ecology, and for nearby environmental justice communities. Here's why we support the No Build option:

Harm to Public Transit. The DEIS projects that about 30% of annual MARC riders on the Penn and Camden lines and over 90% of the Amtrak riders between Penn and Union Station would be diverted to MAGLEV if it were built. The DEIS says (page 4.2-10) that "While no plans to respond to these diversions have yet been developed, these significant forecasted trip diversions would likely require a lowering of MARC service levels to account for a decline in forecasted ridership demand as well as a likely decline in fare revenue. Forecasted changes in ridership demand and lower levels of service would also likely require modifications to MARC’s long-range expansion plans and other capital investments." Meanwhile, MAGLEV tickets are expected to be an average of $60 for a one way fare - 7 times higher than a MARC fare. This would leave public transit riders unable to pay MAGLEV's incredibly high ticket prices with worse service and few options, when much cheaper investments in MARC and Amtrak would improve service and reduce transit times, equitably for everyone.

Increased Greenhouse Gases. The project would increase annual net transportation energy consumption by up to 39% by 2045, compared to the no-build (status quo) option, even when reduced vehicle emissions are taken into account. MAGLEV may be more efficient than personal automobile travel, but it is less efficient than our existing trains and buses, but "the anticipated decrease in energy expenditure from the diversion of auto, bus, and rail traffic to the SCMAGLEV Project is not expected to offset the increase in energy consumption from the SCMAGLEV system" (page 4.19-10).

Loss of Forests and Habitat. The train would be built in the largely undeveloped land between Baltimore and Washington known as the "Green Wedge." The project would destroy up to 451 acres of forest, including up to 42 acres of the Greenbelt Forest Preserve (page ES-19). That's a high price to pay for a project that won't benefit the communities nearest the impacts, not to mention the ecological loss in an area with few undeveloped lands left.

The costs borne by those who cannot use it. Unlike our current trains and buses, the MAGLEV will have no stops in the communities that will be impacted by its construction by losing parks, green space, system venting, and staging. Meanwhile, 69.6% of people in the SCMAGLEV Project Affected Environment are minority, and 102 of the 124 census block groups within the Affected Environment meet one or more Environmental Justice thresholds (page 4.5-5,6). People living along the MAGLEV route will face all of the costs of the project, but receive no transit benefit, since there are no local stations along the route.

We need bold investment in transportation, and we are huge proponents of increasing MARC and Amtrak service, which have stops along their lines and benefit communities more equitably without such high environmental costs. With the comment period closed, we'll be looking for a decision from the FRA and MD-DOT to finalize the Environmental Impact Statement and select a preferred option.