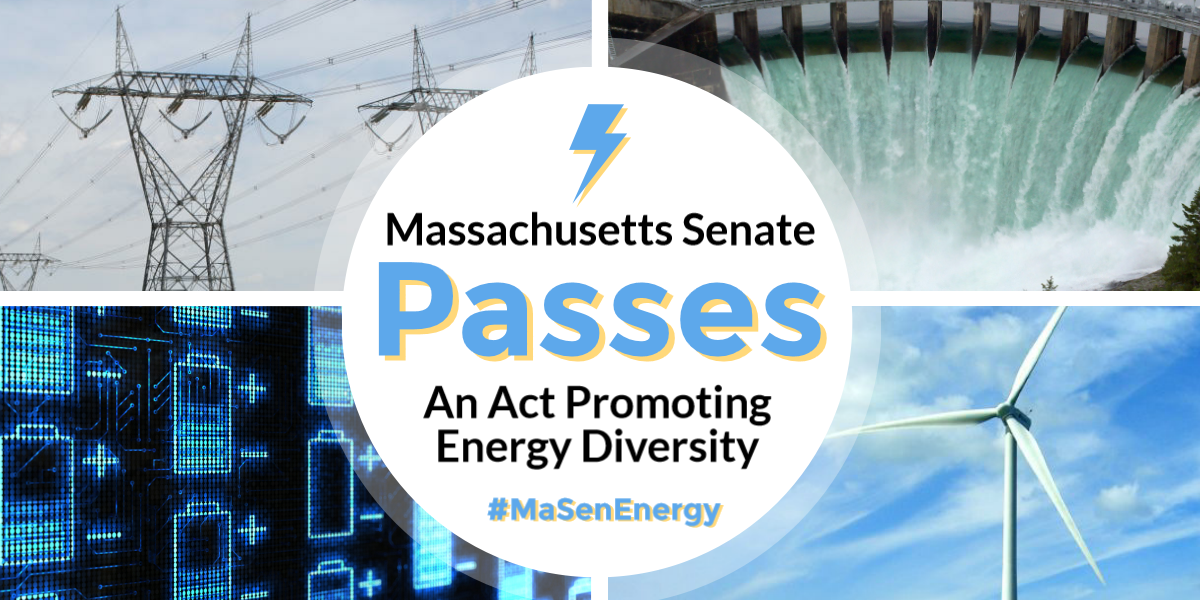 On Thursday, June 30, the Massachusetts Senate released a bunch of really cool infographics and also voted unanimously to pass S2372, omnibus energy legislation that significantly increases our state’s use of clean power. The Senate’s legislation will now be “conferenced” with an earlier, narrowly tailored House energy bill, and legislative leaders from each chamber must come to compromise by the end of July (Clean Water was quoted in Mass Live and the Worcester Business Journal, and also check out a synopsis of the bill and process from here on by reporter Jon Chesto).

The ramifications of the Senate legislation are enormous for Massachusetts. The Senate bill accelerates the Renewable Portfolio Standard, requiring the state to obtain a significant percent of its electricity from renewables by 2030, and lays out a pathway for 2,000 MW of offshore wind—the largest offshore wind commitment of any state in the nation. A recent University of Delaware study suggest this size of clean energy procurement would capture economies of scale and allow significant cost reductions over time. Leveraging local, clean energy resources is a boon for Massachusetts, and the Senate’s commitments promise significant economic growth in green industries while providing stable, reliable power as other sources go offline.

As with the earlier House legislation and debate, amendments were wide and varied - the Senate reviewed 107 amendments on topics ranging from home energy audits to anaerobic digestion. Importantly, the Senate voted unanimously to adopt an amendment by Senator Jehlen (D-Somerville) to ban the “pipeline tax,” which would force electric ratepayers to subsidize new fracked gas pipelines. Without this multi-billion dollar public subsidy, certain pipeline projects, such as Spectra’s Access Northeast proposal, would face significant difficulty in proceeding. Although the pipeline tax ban was ruled outside the scope during the previous House debate, state representatives have since filed (bipartisan) legislation to accomplish the same end. The debate continues (about whether or not we should shift billions of dollars of risk onto consumers to undo 1997 electric restructuring and subsidize fossil fuel projects that we know will put us out of compliance with our climate goals established under the Global Warming Solutions Act)!

Late in the day, the Senate adopted a redrafted but still significant version of gas leaks reforms pushed by Senators Eldridge and Creem. This important addition requires further investigation and repair of environmentally destructive "grade 3" leaks not covered under previous statute, and does so while preserving hard-won collective bargaining agreements. and While the Senate’s language fell short of our goals on repairs -- we join many city councils and municipal public works departments in the believe that it's common sense to fix ALL LEAKS when a road is opened up, and will continue to press the point -- we're glad to see gas leaks language in both House and Senate legislation. Clean Water Action was pleased to work with numerous labor unions advocating for for gas infrastructure reforms, and the Senate legislation reflects triple bottom line values, supporting environment, community and workers. It’s rare to see that kind of victory in public policy.

Not to be outdone on infographics, here's one from us on gas leaks. Actually, it's only one segment of a great graphic Clean Water intern Tori put together. Methane emisssions from grade 3 leaks are one reason nonhazardous leaks need to be repaired, but current law doesn't mandate it. Both the House and Senate version of gas leaks amendments would help in this regard.

The Senate bill also included a number of other policies. One we would like to spotlight is Community Empowerment, a wonderful "energy democracy" reform that would allow for local and intentional community financing of renewable energy projects. This kind of policy could allow for more direct local control over our energy future, and we strongly support it. Planning and financing for nuclear decomissioning—critical for the Pilgrim nuclear power plant, which is nearing the end of its life as a power generation facility—are also included in the legislation. Senators Vinny DeMacedo (R-Plymouth) and Dan Wolf (D-Harwich) have teamed up together on this and Clean Water Action, Toxics Action Center, AFL-CIO and numerous local groups on the South Shore and Cape have been working hard on issues related to Pilgrim's imminent closure.

A selection of other policies within the Senate Bill include:

We will continue advocating for a strong clean energy plan as the House and Senate negotiate a final energy package, and fully intend to keep up public campaigning through the end of the legislative session and beyond.