November 6 Elections Give Us a Chance to Elect Environmental Champions

2018 will be a turning point in Minnesota. In November, voters across the state will elect the next governor, both U.S. Senate seats, 8 congressional seats, all state constitutional officers, and the entire Minnesota House.

Minnesota joins Wisconsin, Illinois, and Iowa as battlegrounds for the upcoming midterm elections. Five of Minnesota’s eight House seats are among the top targeted races, making Minnesota ground zero for elections that could change control of Congress.

The important action isn’t just confined to Minnesota’s congressional delegation. The GOP has one-seat majority in the State Senate. The Governor’s race and the 134 state legislative seats on the ballot will either give the Republicans complete control of state government, or provide Democrats a share of the power. There are dozens of districts carried by Hillary Clinton in 2016, but narrowly won by Republicans in the same election. As the DFL lost some outstate districts, suburban districts have become key to deciding a majority.

Clean Water Action has endorsed candidates that will best protect the environment and public health. The organization has endorsed in three congressional races, the governor’s race, and multiple legislative districts, including:

Read a full list of our endorsed candidates here.

Not sure where to vote? Click here to find your polling place, along with maps and directions.

Paid for and authorized by Clean Water Action. Not authorized by any candidate or candidate committee. For more information, please contact us at www.cleanwater.org or call (202) 895-0420 x 104 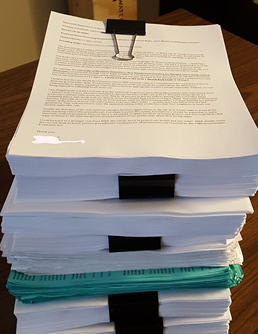 On August 15th, Clean Water Action submitted more than 3,000 postcards, letters, and emails from Clean Water Action members urging the Minnesota Department of Agriculture (MDA) to strengthen the Groundwater Protection Rule. Nearly 75% of Minnesotans get their drinking water from groundwater sources. That is why it is important that the state begins to solve the problem of agricultural chemical pollution in drinking water and well water.

The next stage of this campaign is critical. For years Minnesota has not put drinking water first. According to the Minnesota Department of Health’s Annual Drinking Water Report, 537 public water supply wells across the state have elevated nitrate levels, and roughly 10 percent of private wells in vulnerable areas already exceed health limits. This is causing health problems in communities right now and is costing the state way too much money to address the problem.

The MDA will not act unless groups like Clean Water Action, along with its members, pressure the agency. That means engaging communities across the state and continuing to educate people about what’s at stake, It also means making sure clean water champs at the state capitol to speak out about this issue and that voters elect new clean water legislators to join the campaign.

Clean Water Action is committed to winning this fight and ensuring the MDA develops a robust plan to protect drinking water for all Minnesotans.

With the goal of providing our members with a clear picture of how our legislature performed on issues regarding the environment and public health, Clean Water Action Minnesota released a comprehensive scorecard for the 2017/2018 legislative sessions. The Legislative Scorecard represents a permanent record that scores every Minnesota state legislator on their votes on significant environmental legislation. The scores earned by the legislature reflect that the 2017/2018 legislative sessions were replete with missed opportunities to pass practical solutions to address critical environmental and public health issues. Clean Water Action’s scorecard highlights our work and reveals both disappointingly low environmental scores and notable scores earned by environmental champions.

Scorecard analysis revealed that on most legislative initiatives this session, the anti-environment position won. Over half of our legislature received a failing environmental score for the 2017/2018 legislative sessions. The Minnesota Senate received an average failing score of 45%, with the Minnesota House of Representatives earning 39%. Additional review of caucus averages shows that on average, Senate Democrats (89%) scored higher than Senate Republicans (0%) while House Democrats (90%) significantly outperformed the House Republicans (1%). On an individual legislator basis 23 members of the Senate and 37 members of the House of Representatives earned perfect scores (100%). On an individual basis many legislators scored shockingly low, 35 senators and 75 representatives scored below 15%.

Currently, our legislature is failing to get the job done. Fortunately, it’s not too late to change the course we’re currently on. When the next legislative session convenes, it is imperative that we as constituents voice our concerns and call for immediate corrective action. We need our elected officials to speak up, take the initiative, and put the legislature’s best foot forward when it comes to passing environmental policies that will benefit Minnesota for generations to come. Read the scorecard here.

The Problem With Corporate Industrial Agriculture and Minnesota’s Water

One of the greatest threats to the quality and health of Minnesota’s rivers, lakes, streams, and drinking water sources is excess chemicals, fertilizers, and sediment from irresponsible agricultural practices.

There are many ways these pollutants enter surface waters, but runoff from single crop farmland and animal factory farms are some of the largest contributors to this problem.

According to the Minnesota Pollution Control Agency (MPCA), many streams and rivers across the state cannot fully support swimming and recreation due to this pollution. The state has attempted to address this issue through voluntary measures featuring taxpayer financed incentives. This hasn’t solved the problem and, in many ways, it has become worse. This widespread, but completely solvable crisis warrants intervention from state agencies.

The bottom line: industrial farming practices can lead to bad outcomes for surface and ground water. There are several reasons for this. One is that buffers and living cover on the land are not required. This allows pollutants like nitrogen and phosphorus runoff directly into streams and rivers.

Excessive drain tile or subsurface tile, which are artificial drainage systems that keep moisture levels more consistent in the soil and increase productivity on the land, can cause problems as well. Tile drainage negatively impacts water quality because it allows more water and pollution to flow from the fields into surface water. That leads to increased flooding and erosion. In addition, tile drainage carries higher levels of nutrients and pesticides which can lead to more harmful algae outbreaks and impact health and drinking water quality.

Industrial factory farming is another threat. These “farms” confine tens of thousands of animals in very close quarters. They produce enormous amounts of animal waste, too much to deal with sustainably, and it runs off or seeps into the groundwater supply.

Excess pesticides, fertilizers, and other chemicals running off into surface and groundwater are another significant problem. In many watersheds where single crop agriculture or factory farming dominate the landscape, less than half of lakes and rivers fully support swimming because of excess phosphorus and nitrogen. Many of the communities are facing drinking water contamination as a result of over using these chemicals.

Finally, the ethanol mandate and monoculture have had serious consequences for our water. Federal law has mandated that gasoline for cars and trucks to be mixed with an increasing amount of corn-based ethanol since 2007. Since the mandate, landowners have filled in wetlands and plowed prairies, applied billions of pounds of fertilizer and pesticides onto the landscape to make it more economically productive, some of which has polluted drinking water.

Fortunately, there are some simple and cost effective measures that can help prevent many of these pollutants from ever reaching our waters.  Some, however, are going to take much more work to implement and political will to finally address the problem that runoff from industrial farming is causing.

Stay in the Loop: 3M Settlement

Though the State of Minnesota and 3M Corporation reached a settlement regarding PFAS contamination in the east metro area to the tune of $850 million early this year, it’s still unclear exactly how that money will be spent. Clean Water Action will continue to watch the planning process closely to ensure that projects result in safer and cleaner water for all who are impacted in the region.

Here’s what you need to know:

As project planning develops and becomes more specific, Clean Water Action will continue to update you on the most important news. Visit this page to find meeting notes and state documents related to the 3M settlement.