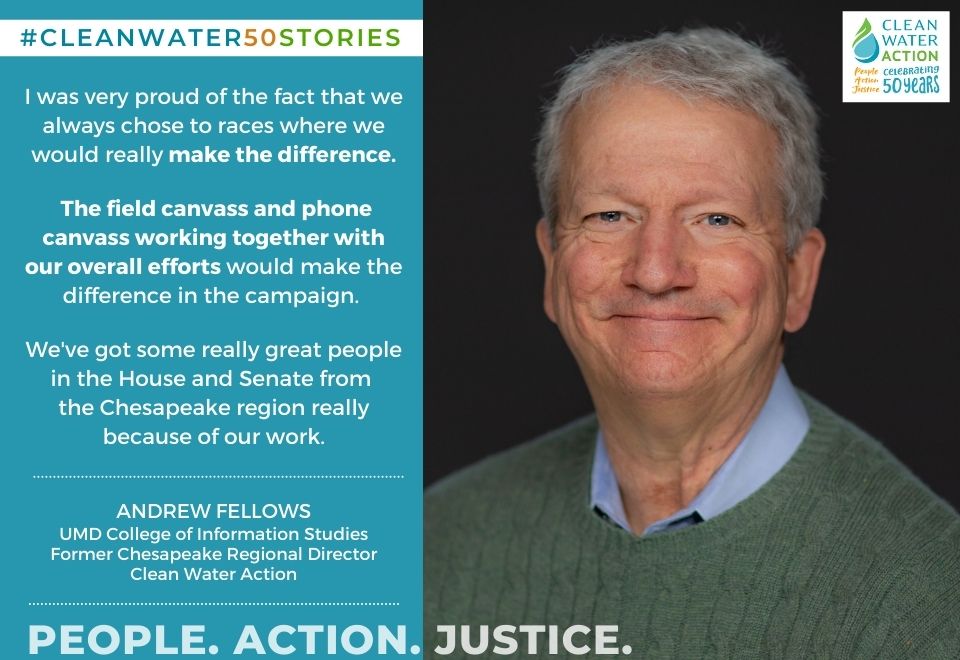 In honor of Clean Water Action's 50th birthday, we are lifting up voices and stories in the Clean Water movement through #CleanWater50Stories. Our story is the story of everyday people who have used their power to make a difference to create a healthier and greener future for all.

Meet Andrew Fellows! Andy is a leader, a strategist, an organizer, and activist, and has a long history with Clean Water Action. Many know that Andy was our Chesapeake Regional Director from 1999 through 2014. Andy got his start at Clean Water as a canvasser in the 1980s. Andy has also served on the City Council and as Mayor of College Park, Maryland and currently coordinates Campus Community Connection at the University of Maryland. These are just a few of his many diverse roles, where he excels at bringing people together and making progress to improve all of our lives. We are grateful for his continuing support for and engagement with Clean Water Action!

Some of my favorite memories of Clean Water Action are around elections, but also other issues. And I will talk a little bit about those. One of my favorite memories actually also involves David Zwick. In 2002 at Clean Water, we rarely endorsed in primary fights. There was a congressional race coming up in Maryland where Chris Van Hollen, who had been a longtime champion in Maryland state legislature for us was running against a guy named Mark Shriver who was part of the Kennedy family. He had a hundred percent record in the environment, but he'd not been the champion in Annapolis like Van Hollen had been. So we made a decision using our endorsement process to make an endorsement in the primary.

And it was a long shot because the Shriver family, there was a lot of money coming in to the race and everyone expected Shriver to win because, you know, the mystique of the Kennedy family. So we knocked on doors. We phoned people. We did grassroots organizing and we were able to win by a very slim margin in the primary in that year. And that district was going to be that nomination was going up against an incumbent Republican, who, whom we had endorsed, Connie Morell, who is not a bad Republican, but again, Van Holland or Shriver, would've been a champion versus just an okay vote. So we had another challenging race in that the general election, but that was actually easier than the primary, and we were able to win in the general election.

So we were really one of the reasons that Chris van Hollen got elected to the House and paving the way for his eventual win in the Senate, and he still in the US Senate today. Another electoral memory which I really cherish is the fact that we also in a primary, we made a decision through our endorsement process to endorse, Donna Edwards, who had been an organizer and a champion in stopping a, a really bad development from happening. And although the development happened, it was also improved in the process through Dan Edwards and other local grassroots activist efforts. So she was up against incumbent Albert Wynn, who we had endorsed at Clean Water before my time in 1992. He'd been good in the state legislature, but he got more and more conservative.

It was an uphill effort and we didn't win in 2008, but we waited until Don Edwards announced she was going to run again in 2008 and another really long shot effort, were able to win 2008 in an astounding upset against an incumbent. So Donna Edwards served for many terms in the house. Unfortunately she ran against Van Hollen for the Senate, our primary which we did not endorse in. We also in 2008 elected Jerry Connelly, but more importantly in 2010, we knew that the backlash from the 2008 President Obama's great victory that the Republican backlash would be strong. And we put a lot of effort into 2010 and we reelected Jerry Connolly by less than a thousand votes under really the Republican swamp or tide of 2010. The final election effort that I really am proud of is the fact that we delayed Andy Harris, a very conservative member of the house, for the first district in Maryland from serving because also in, 2008 we knocked on doors in the Eastern shore. We were able to get the opponent to Harris elected. And we won by less than a thousand votes.

I was very proud of the fact that we always chose races where we would really make the difference. The field canvas and the phone canvass working together with our overall efforts would make the difference in the campaign. We've got some really great people in the House and Senate from the Chesapeake region really because of our work. We also endorsed Muriel Bowser, the current mayor of DC and her first fourth district City Council race. I’m proud of that as well.

Why Do You Care About Clean Water?

The reason that clean water is so important to me, I guess it's around drinking water, but it's also around environmental justice and the fact that it's so important to everyone and the people that are disproportionately burdened with toxics and exposures and bad health effects from lack of clean water are communities that are without political power, without the power to fight the people who have the money who are polluting.

So I think that the lead campaign of 2004 is the one that strikes me. I remember Paul Schwartz, who was a national staff member, and I were going to do a drinking water protection workshop on January 31st, 2004. We picked up the Washington Post on our way out and  saw above the fold that the lead levels and the DC drinking water was astronomically high, and that DC water and sewer authority had been covering it up. So by the end of that day, we had made a decision to launch into this campaign and with Lynn Thorpe, another national staff person, and we mobilized something called the Lead Campaign, or L.E.A.D. which could be pronounced lead or lead. We worked with Damu Smith, who was a nationally recognized environmental justice organizer and with some of his team.

We mobilized people throughout the District of Columbia in low income communities, but also high lead levels were really everywhere. It wasn't just hitting certain neighborhoods. It really hit all the district. We had an amazing coalition of people. And, out of that campaign, we helped create the districts Department of the Environment, which is now the Department of Energy & Environment. We also got rid of the general manager of DC water and sewer authority who should have gone to jail, but, we at least got him out of there. That brought George Hawkins to the district government, and then he eventually became the general manager and really transformed that agency into one that's much better. They are not without flaws, but they're a much-improved agency and now doing businesses at DC water. I think that the work that we did in South Baltimore is the other thing that was groundbreaking – a kind of foundation building and working in coalition with others, like the Environmental Integrity Project to challenge the efforts to build more waste incinerators in South Baltimore.

We stopped a couple and we also helped develop leaders like Destiny Watford who's now a nationally known low-income community organizer. She’s Colorado now, but she came out of South Baltimore and I think she was in secondary school at the time that we started working with her. One of the things that, the last story I wanted to mention was also local, and just as my last year or so as the Chesapeake Regional Director before I moved on there was an effort to build a major development in the source water of Little Seneca Lake reservoir in Montgomery County on a Creek called 10 Mile Creek. And we worked with Audubon National Society to build a coalition to protect 10 Mile Cree. We, again, coming from the Baltimore office and the DC office knocked on doors in the district. We went from having only one county council member who was opposed to the project and his name was Marc Elrich, who's now the county executive of Montgomery county. We ended up with everybody except for one voting against the project. And we did it by turning it into a drinking water issue and, and saying, you know, why are we endangering not just Montgomery county waters, but the water supply of the entire district area that gets water from the Potomac River. That was another campaign that showed the power of grassroots organizing to win. And against major odds. And I think that the work that we did in general, one of the reasons that Clean Water is so important to me is the work I did for the 15 years, which I really cherished.

How has working at Clean Water Action impacted your career today?

The work I do now is really focusing on more local sustainability and working with the University of Maryland. I'm in the college of information studies and I teach classes and capstone projects to get engaged in community.  It's the importance of water, both drinking water, waste, water, storm water, to really work to integrate the management of water and also to bring in different disciplines. And in that work, it's not just engineering, it's not just social science, it's a, it's an education issue because of learning and behavioral disabilities that are related to air quality like lead poisoning and mercury. And so the work I did at Clean Water action really carries with me today. I feel I'm not doing advocacy now, but I'm really building resources for communities and getting University of Maryland and College Park to be more engaged in local communities.

I also learned so much about watersheds, so I'm happy that I'm still in the Anacostia Watershed and still focusing on protecting and restoring that watershed, which then protects the Potomac and Chesapeake Bay. I thank Clean Water Action for the opportunity to have done the work I did. I'm pleased to be a continuing member sustaining member and I like working with Clean Water Action as often as I can.

Happy 50th anniversary. I'm very proud given Supreme Court decisions. There weren't that many memorable issues around the many court cases like the Swank decision, but I was very proud and impressed that we continued working for most of my entire career for the Supreme Court protection of the meaning of the Clean Water Act. And that's obviously still under assault today. So the battle goes on.