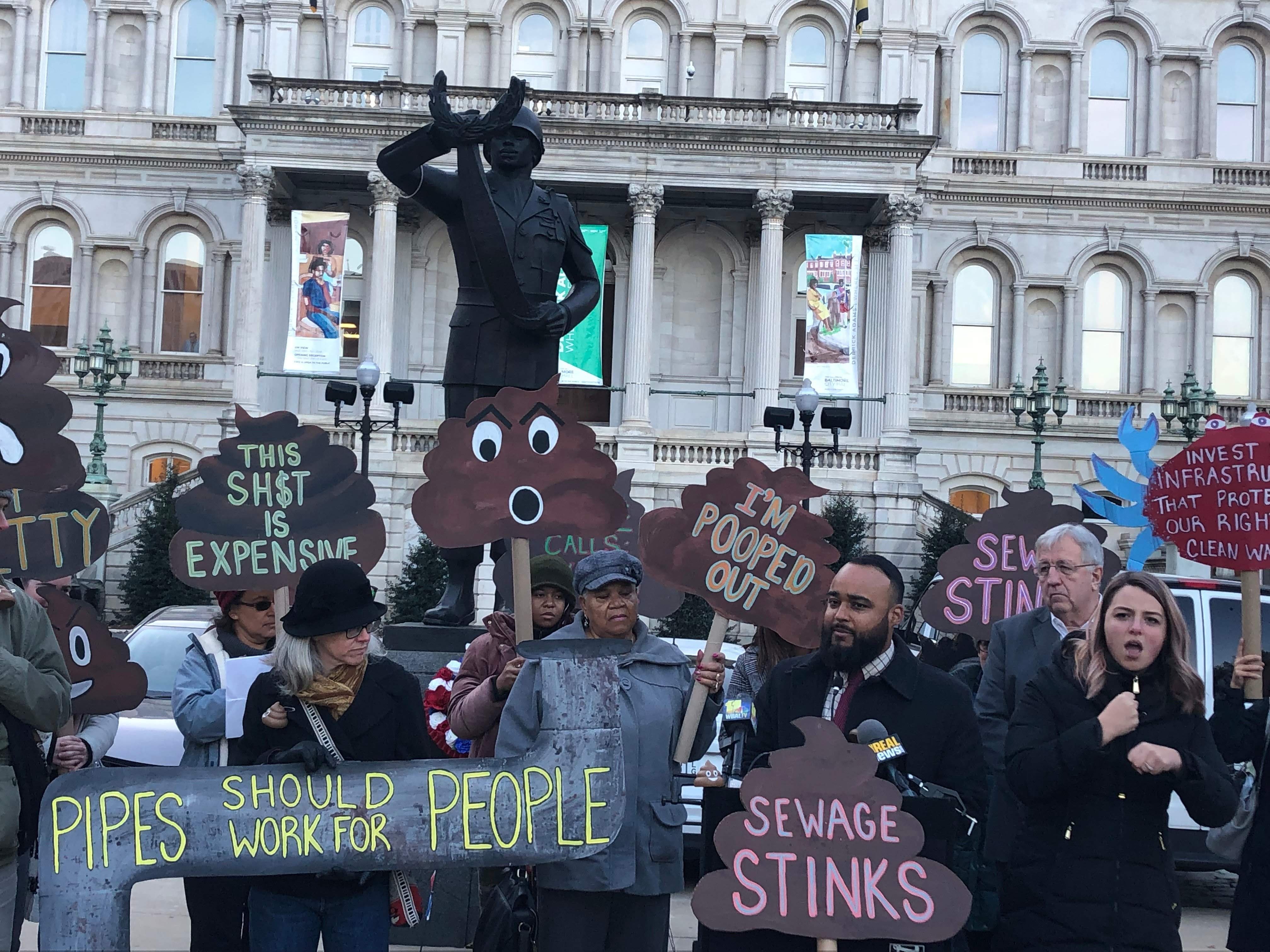 "Raw sewage is bad for human health - this is universal." -Chris Heaney, Associate Professor for Environmental Health and Engineering at Johns Hopkins University

On Wednesday November 13th , I attended a hearing that the Baltimore City Council's Land Use Committee held for Resolution 19-0159, an investigation into sewage backups into buildings and the city's Expedited Reimbursement Program, set up to assist residents with the costs associated with sewer backups. The backup of sewage into Baltimore homes is a big problem, and only increasing with factors such a climate change causing more frequent heavy rain events, combined with increased pressure in sewage systems due to closings of sewer outfalls. The expedited reimbursement program is required by Baltimore’s modified consent decree regarding sanitary sewers, but hasn’t worked to great effect causing numerous problems for city residents. Problems with the program include but are not limited to a low reimbursement cap, strict but murky criteria for reimbursement, and general lack of notification on the issue for city residents. These problems were brought to attention in the hearing, and a rally held beforehand by Clean Water Action, Blue Water Baltimore, the Environmental Integrity Project, West Arlington Improvement Association, Violetville and St. Agnes Community Association, and The Church of the Guardian Angel. (Watch the rally here!) At the rally, Councilman Kristerfer Burnett named the problem of sewer backups as ” [resultant of] systemic dis-investment from city infrastructure;” then the rally speakers and many more issue area experts and impacted residents went indoors to watch and speak at the hearing. The entire hearing is available on Youtube here; the links below take you directly to the moment in question.

The hearing began at approximately 5pm and opened with testification from Grove Park resident Doris Brightful about her multiple sewage backups since 2014 causing extreme damage in her basement along with DPW's ineptitude in helping with her backups. When talking about a 2015 backup, she said her family contacted 311, and "they said they would come and send someone to help evacuate the water, and they didn’t show until 11:00 the next morning by that time we had just but boots on." This was followed by testimony from Alice Volpitta  of Blue Water Baltimore calling "DPW’s decision to close of most of the sewer system’s emergency relief valves before adequately increasing pipe capacity" a "predictable catastrophe." Surprising testimony then came from Joy Hatchett of the Maryland Insurance Administration, whose unit handles disaster response and refers consumers to resources outside of insurance if a disaster can’t be covered, and who was not informed about the expedited reimbursement program until this summer - by advocates, not by the city. Later, even Director McMillan of the Mayor’s Office of Emergency Management claimed the program was unbeknownst to him until directly in this actual hearing. This brings into question whether the ERP is being intentionally hidden by DPW. If information isn’t being prudently shared by DPW to actual agencies in the same way that constituents aren’t being effectively informed, how can information be effectively disseminated?

Additional testimony was presented by Chris Heaney of Johns Hopkins and Billy Walker, a public adjuster. Heaney referenced research showing disproportionate affected-ness of African American neighborhoods by repeated sewage backups, bringing into question an equity issue, and Walker addressed actual logistics of cleaning sewage backups. One striking testimony was from Sean Stinett, president of the West Arlington Improvement Association, talking about correspondence with DPW officials and how even the director, Rudy Chow, wouldn’t offer continued correspondence, much less help, concerning his community’s continued backups. Natasha Bock-Singleton of the Violetville-St. Agnes Community Association then highlighted a real time situation where the expedited reimbursement program was ineffective, after her community was hit hard with sewage backups - and even though association members volunteered to canvass the entire neighborhood to notify members of the community of the existence of the ERP, so those eligible could submit applications, everyone was denied. More testimony from Craig Bettenhausen of The Church of the Guardian Angel illuminated a story of three sewage backups into the Church’s basement where their thrift store is housed, which destroyed valuable merchandise used to fund their food pantry. Though DPW had allegedly "found the problem" after the first sewage backup this year, the issue occurred a second and third time and again destroyed merchandise, and put the thrift store out of commision for the time being. After testimony occurred, Baltimore City Health Department Public Information Officer D'Paul Nibber admitted that his department didn’t have the correct resources to help handle actual cleanup, so "we’re left in a situation where residents kind of have to deal with the health mess on their own." Issues like this cannot continue for residents, churches (like this one), and businesses that want to function with normalcy in their own spaces.

An interesting feature incorporated in the hearing was a video chat with lawyer David D Altman, of Cincinnati, talking about the differences in how his city’s sewer backup program was built - "our sewer backup program is much broader than what you have" - and more importantly, that, because of public health issues the backup is immediately taken care of by a contractor paid by the city of Cincinnati. Addressing liability, he said "I hear DPW has liability concerns, liability should not be an issue, hasn’t been an issue in Cincinnati." Later the DPW Chief of Legal and Regulatory Affairs, Paul DeSantis, tried to reference steps to help residents in Baltimore’s program, but these were all very obviously incomplete. In the same section of the hearing,  no DPW official could answer whether or not the $2,500 cap on the reimbursement program was based on actual cleanup costs, until it was found that 2500 was the legal floor of expedited reimbursement program. Councilman Burnett, then spoke the sad and glaringly obvious truth--- DPW could have done more in creation of the expedited reimbursement program, but essentially decided not to.

Yolanda Winkler, Chief of Communications and Strategic Alliances, too acknowledged that there was imprudence on the city’s end: "Surely there has been a problem, and we are working towards fixing it." Now that there has been a hearing and all are on notice, this work should begin posthaste. As our Maryland Program Coordinator Jennifer Kunze testified, “[The city should] make this the last time people have to come out to a hearing and not see this problem resolved.” People need, in the long run, for frequent sewage backups into their living spaces to end, and in the meantime a solid program to address the issue as it occurs.

At the end of the hearing, Councilman Edward Reisinger, the chair of the Land Use Committee, announced that the committee would go into recess on resolution 19-0159 and "find a way to deal with this to see that citizens of Baltimore are cared about." Expect a reconvening of this investigatory hearing in the new year!