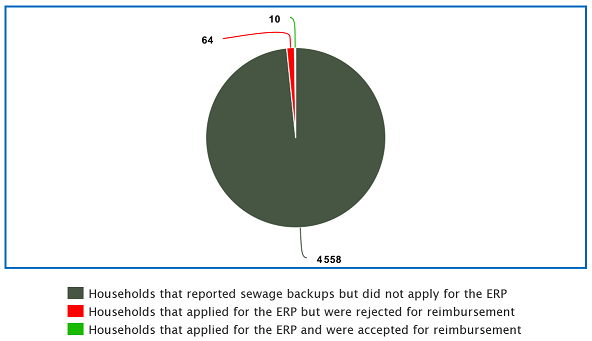 4,500+ Baltimore homes had sewage backups last year - but only 10 got assistance

For almost a year, our team has been knocking on doors, visiting community association, and speaking at community festivals in Baltimore City about a subject nobody really wants to talk about: sewage backing up into people's basements. According to 311 call records, this happens to more than 4,500 times in Baltimore City every year, and the results can be severe: thousands of dollars in financial damages, panic and disruption to daily life, exposure to dangerous pathogens, and long-term health risks from mold and mildew in damp, bacteria-infested walls. Read about the kinds of impacts this can have on a household in this interview in the Baltimore Sun with Sean Stinnett of West Arlington, and this interview in the Baltimore Brew with Natasza Bock-Singleton of Violetville.

Last year, Baltimore City was required by the Modified Consent Decree, a legal agreement with the Maryland Department of the Environment and EPA, to launch an Expedited Reimbursement Program: a special program, just for sewage backups, that could help people more quickly recover financial damages from the City when the backup was caused by wet-weather surcharging - a problem that only occurs because the city's sewage infrastructure is old and in disrepair, allowing rainwater to flood the pipes and cause backups and overflows. But a few weeks ago, DPW released information about the first year of the program, and it's not good. Out of 4,500 sewage backups, only 74 applications to the program were logged, and only 10 people got reimbursed. Here are some of the problems we see:

Right now, the Maryland Department of the Environment (MDE) and Environmental Protection Agency (EPA) are looking for comments from Baltimore City residents about your experiences with sewage backups and the Expedited Reimbursement Program as well as any recommendations you have for changing this program to make it more effective. This is an opportunity for you to shape how Baltimore City responds to this critical health risk and financial burden in the future.

To develop your spoken or written comments: click here for our guide to developing testimony.

Update: MDE's comment period is over, but the Baltimore City Council is holding hearings and taking testimony on sewage backups. Click here to write a comment to the City Council about your experience and recommendations.