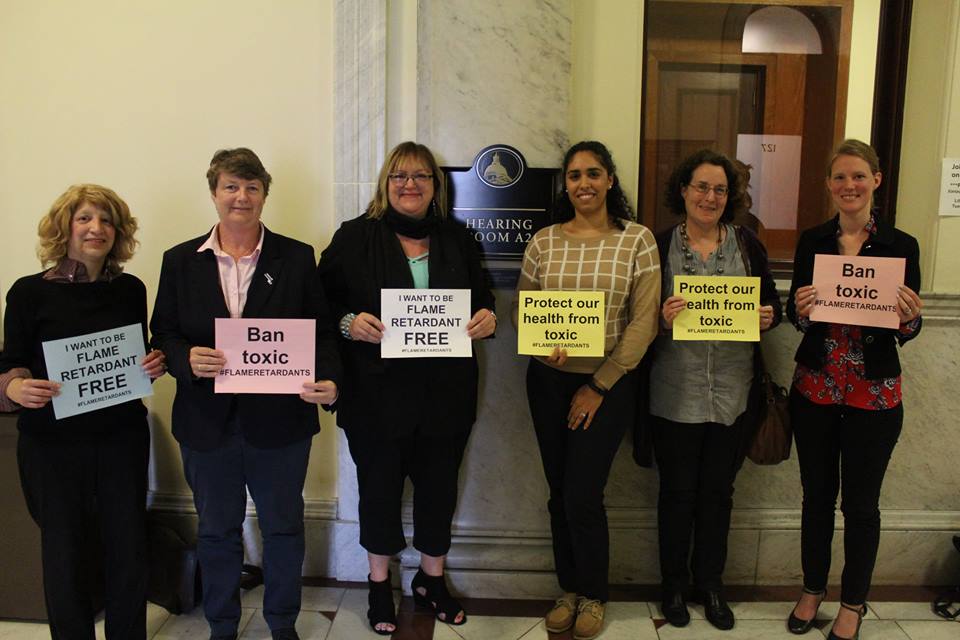 As the summer kicked off in June and many went on vacation, the Joint Committee on Public Health was hard at work setting up hearings and listening to testimony. This legislative session has started with a lot of hope for the Children and Firefighters Protection Act; it passed the Senate unanimously last session and Clean Water Action and allies are determined to see it pass both the Senate and the House this time around.

The Children and Firefighters Protection Acts were heard by the Public Health Committee early on in the committee’s 8 month stretch of scheduled hearings. On June 6th the Committee heard Senator Cynthia Stone Creem’s version of the bill (S.1175) and on June 27th, Representative Marjorie Decker’s version (H.1245). During the first hearing, after a couple of hours went by, it was finally my team’s turn to testify, but not before the chemical industry had its say. The statements from the chemical industry lobbyists (including one man who introduced himself as Dr. Mark Blaise - pronounced "Blaze" - so when he introduced himself it raised some eyebrows, talk about matching the name with the profession!) were not new nor or surprising; they were the usual misleading statements that we’ve heard in state after state for years:

Clean Water Action teamed up with partners in the Alliance for a Healthy Tomorrow and other allies to rebut these arguments and make the case for getting ride of toxic flame retardants. In addition to me, others who testified that day included the Silent Spring Institute, the Mass Breast Cancer Coalition, MassCOSH, MASSPIRG, a concerned mother and volunteer, the Professional Fire Fighters of Massachusetts. We showed support for this bill because:

During the hearing on June 27th I reiterated the important reasons why Representative Decker’s bill should also be given a favorable report and passed into law. The American Chemistry Council (ACC) again gave testimony full of misinformation, which was expertly rebutted by Alliance for a Healthy Tomorrow Governing Board member Janet Domenitz from MASSPIRG. The Professional Fire Fighters of Massachusetts testified in support as well.

Overall, Clean Water Action and allies made a strong case for the Children and Firefighters Protection Act, and we’re well poised to move the bill towards the finish line as soon as the Public Health Committee gives it a favorable report. Take action today and urge your state representative to support a ban on toxic flame retardants in Massachusetts!