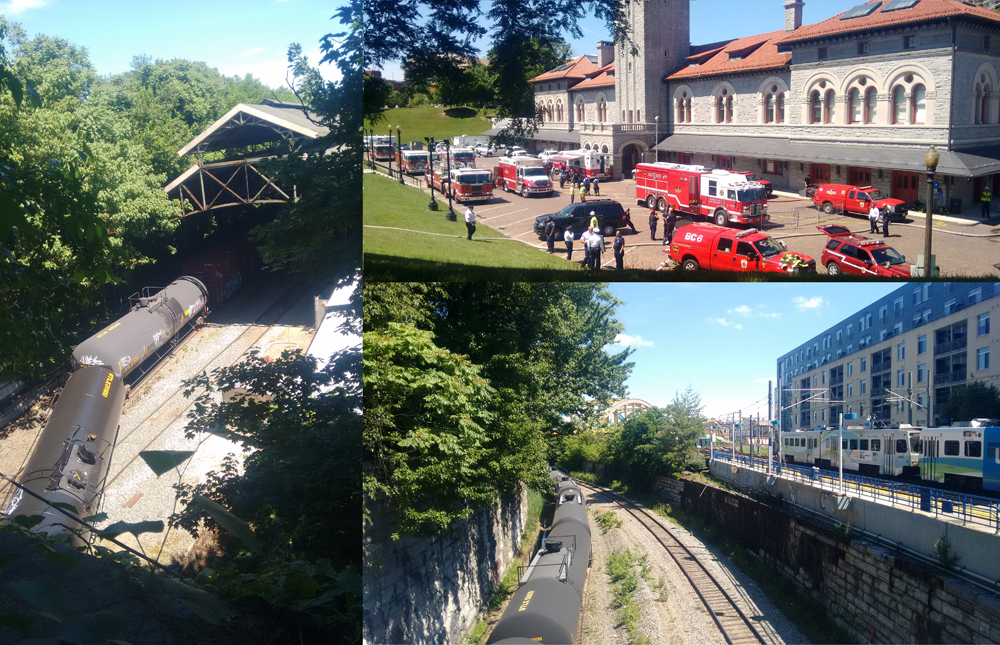 A Derailment in the Howard Tunnel

On Monday, June 13 residents of Baltimore woke to the news that a freight train carrying hazardous materials had derailed inside the Howard Street Tunnel, a century-old freight tunnel that runs for almost two miles underneath downtown Baltimore. Well aware that trains carrying volatile crude oil take this route through the city, I headed to the scene of the derailment and saw the frightening site of a tanker car off the tracks at the mouth of the tunnel, more tanker cars stretching off into the distance, and the blocks surrounding the derailment full of fire trucks, emergency vehicles, and police. As the day went on, we learned more about what had happened. The train, traveling from Philadelphia to Cumberland with 18 full and 106 empty cars, was entering the northern end of the Howard Street Tunnel at the corner of Howard and Preston Streets when 13 cars jumped off the tracks. Twelve of the derailed cars were empty cars designed to carry liquefied petroleum gas, with residual amounts and vapors inside. One car carried acetone, a flammable liquid found in paint thinner. None of the cars punctured or spilled, and on Thursday, the Baltimore City Fire Department and CSX completed moving the cars without further incident.

But if one of those cars had contained crude oil, this might have been a very different story. Up to five CSX trains per week carry volatile crude oil on the very tracks that caused this derailment – and if those cars had been the ones to derail, the resulting explosion would have endangered MICA, the University of Baltimore, the Meyerhoff, the light rail, and countless homes and businesses.

Tuesday afternoon, residents of Baltimore and oil train safety advocates gathered above the tunnel to speak out on the dangers of oil train traffic through the city. Jon Kenny of the Chesapeake Climate Action Network shared about the hazards of oil train shipments across the country and the need to take action locally to protect ourselves. I spoke about the specific hazards of Baltimore’s infrastructure – from the old and narrow Howard Street Tunnel, to dangerous at-grade crossings, to old and crumbling bridges and tunnels – and how they endanger our homes, schools, businesses, and waterways. Chauna Brocht spoke about the fear she feels for her children, whose elementary school is just yards away from the oil train route less than a mile from the site of the derailment. Reverend Ty Hullinger, pastor of Most Precious Blood Church in northeast Baltimore which was damaged by a train derailment and explosion two years ago, spoke of the effects of past freight derailments in Baltimore. Destiny Watford, a resident of Curtis Bay in south Baltimore, spoke about the export terminal in her community, where oil is transferred from rail cars to cargo ships, and the need to envision Fair Development alternatives to polluting industry. And finally, Delegate Clarence Lam, sponsor of the Rail Safety Act of 2016, called the city to action to protect itself from oil train explosions. Last week’s train derailment is a frightening reminder of what shipping dangerous freight through Baltimore risks to its residents. The city must act now to pass the Oil Train Ordinance, which calls for studies of the risks and health impacts of oil train shipments and mandates safety measures and public outreach.

Please contact City Council President Jack Young, Chair of the Judiciary Committee Jim Kraft, and your own city council member to ask them to schedule a public hearing now.

Baltimore’s safety depends on it.