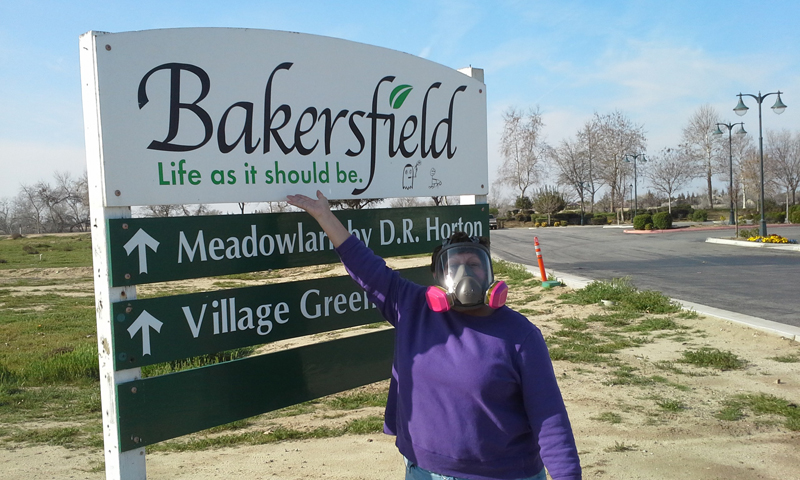 Wearing a respirator in Bakersfield—where the town motto is "life as it should be."

Oil and Gas
California
Rosanna Esparza
@CleanH2OCA
Lately I’ve been thinking about signs I’ve seen scattered around neighborhoods in Bakersfield with the proclamation, “Bakersfield – Life As It Should Be.” They’re kidding, right? Almost everywhere you turn in Bakersfield is an homage to oil production: Abandoned storage tanks dripping oil onto the ground, idle pump-jacks, and rusted-out pipes grace the landscape.

By all rights I’m a newbie in Kern County. I’ve lived here since 2014 when I accepted an organizing position with Clean Water Action. I spent two years in Wasco, CA working on my dissertation in 2008. You can’t compare life in Wasco with life in Bakersfield. The welcome sign as you enter the City of Wasco reads, “Grow with Us.” That makes sense. Wasco was known as the "rose capital of the U.S.", but "life as it should be?"

In 2008 I used to smell the sweet scent of roses almost every afternoon when the wind blew from the north-west to the south-east across the rose fields. Hundreds of acres of roses fluttering in the wind were glorious gifts to the nose and memory. Today the roses are gone. In their place oil rigs and pump-jacks bobbing up and down. I see flares of methane gas and smell the fumes of cancer-causing chemicals.

I like Wasco, Bakersfield, Shafter, Lost Hills, and Delano. Each community has its own personality. Spend any time in any of these communities and you understand why most people born and raised here never want to leave. It is home.

What I don’t like about Kern County is those that live here are suffocating to death and cutting 10 years off their life expectancy. Every year Fresno County, Kern County and Los Angeles County battle it out for the dubious honor of the worst air quality in the United States. Asthma rates here in the southern tip of the San Joaquin Valley are three times the national average. Chronic pulmonary disease is overly represented in the population as is cancer and Parkinson’s disease.

Kern County is the third largest producer of oil in the United States. A closer look  shows the Kern River Oil Field (10th largest oil field in the U.S.) relies on steam injection. Each day 250,000 barrels of steam are pushed through steam injectors producing 783,000 barrels of produced water and 67,000 barrels of oil. In other words, for every barrel of oil, 15 barrels of briny, chemical-laden water is produced.

Every day hundreds of thousands of gallons of groundwater and high volumes of toxic chemicals are injected into the ground next to waterways, through our groundwater aquifers and dangerously close to communities and farmland. The Central Valley is the backbone of California’s $36.9 billion a year agricultural industry producing 25% of our nation’s food. Water is our lifeblood. What to do when the oil industry injects oilfield waste into protected aquifers? California regulators closed 33 wells that were injecting oilfield waste into protected aquifers.

Is this "life as it should be?" I think not.

If you agree, then right now, Clean Water Action is running an action you might be interested in. We're asking folks to write to the regulators to ask that they strengthen the rules surrounding the injection of wastewater into our groundwater. Thanks for your support.