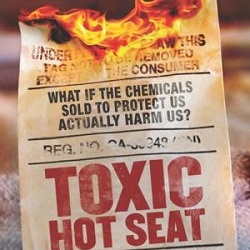 Flame retardant chemicals have been linked to cancer, learning and developmental disabilities in children and many more health issues. They are found in many household and business products including upholstered furniture, car seats and strollers, nursing pillows, electronics-including toys-and more.

In 1975, California legislators enacted a flammability standard, TB-117, which required all polyurethane foam in furniture and children's products to be able to resist an open flame for 12 seconds. This standard could only be met by adding large amounts of chemical flame retardants into the foam.

In recent years, science has demonstrated that chemical flame retardants used according to TB-117 do not actually slow the spread of fire in real-life situations. The initial "open flame standard" was based on faulty science and misrepresentation by chemical companies. As a result, the state of California changed TB-117 to TB-117 2013, a new standard that no longer requires the use of flame retardants as of January 1, 2015.

However, the new standard does not ban the use of flame retardants, and chemical companies continue to advocate for their use.

In the State of Massachusetts (but not the City of Boston which has its own fire code) the fire code for public spaces was updated in 2014 so that venues such as movie theaters, universities, large meeting rooms and hotels that have sprinkler systems can now also furnish the spaces with furniture that complies with TB117-2013. Thus, public spaces in Massachusetts now can be made flame retardant free.

For consumers, many of the nation's largest retailers, such as Ashley Furniture, Crate & Barrel, The Futon Shop, and La-Z-Boy have flame retardant-free furniture now available for purchase and/or are phasing out consumer products with toxic flame retardants, however, the pace of the phase-outs and disclosure of the contents of the products remains sluggish, and too many consumers still do not have access to flame retardant free furniture. Clean Water Action has teamed up with public health advocates, scientists and firefighters in Massachusetts to press for state, municipal and corporate policies that limit the use of flame retardants. Clean Water Action's work includes: