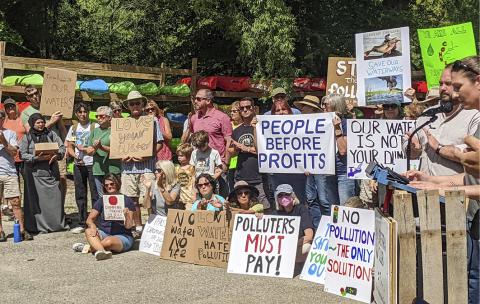 From 1990 until 1995, Michigan had the strongest “polluter pay” law in the country. If a corporation was responsible for contaminating our land, air, or water, that corporation was also responsible for cleaning up the mess they made. In 1995 the administration of former Governor John Engler, backed by their allies at the Michigan Chamber of Commerce, gutted the polluter pay law, and funding for environmental cleanups in Michigan has suffered ever since.

When Michigan established our polluter pay law three decades ago, we were leading the way in environmental protection. Other states looked to Michigan as an example of how to fairly and fully protect our natural resources from corporate polluters. Today we are no longer a leader in environmental protection. There are contaminated sites across our state that have gone unaddressed for too long. The current PFAS crisis, the Gelman 1,4 dioxane plume in Ann Arbor, increasing algal blooms in the Great Lakes from nutrient pollution, and repeated violations are all warnings that we must do more.

Right now there are hundreds of contaminated sites in Michigan that were contaminated by corporate polluters, and yet Michigan taxpayers are on the hook to pay for cleanups.

In February 2021, Minority Floor Leader Yousef Rabhi along with 49 co-sponsors introduced HB 4314 to hold polluters accountable for the pollution they create and the harm that it causes. A similar bill, SB 58, has already been introduced in the Senate by Senator Jeff Irwin. These bills were not allowed to come to a vote - but with the new 2023 legislature, there is new opportunity to take action. And with over 24,000 contaminated sites across Michigan, this issue could not be more urgent. Those who are responsible for environmental contamination need to be held responsible for cleaning it up. This is a basic issue of fairness – taxpayers should not be liable for cleaning up after wealthy corporations.

Join us by asking your Michigan State Senator and Representative to support reintroducing, passing, and enacting this common sense legislation. Polluters should be picking up the bill for contamination cleanup - not Michigan taxpayers. Write to your lawmakers today! ↓

Clean Water Action has 135,000 active Michigan members who value our Great Lakes and protection of the water resources on which we all rely. This document covers our priorities and policy recommendations for the 102nd Michigan legislature.
Learn More

Michigan once had the strongest “polluter pay” law in the country. In 1995 the polluter pay law was gutted. Today there are hundreds of sites across the state contaminated by corporate polluters, and yet Michigan taxpayers are on the hook to pay for cleanups.
Learn More