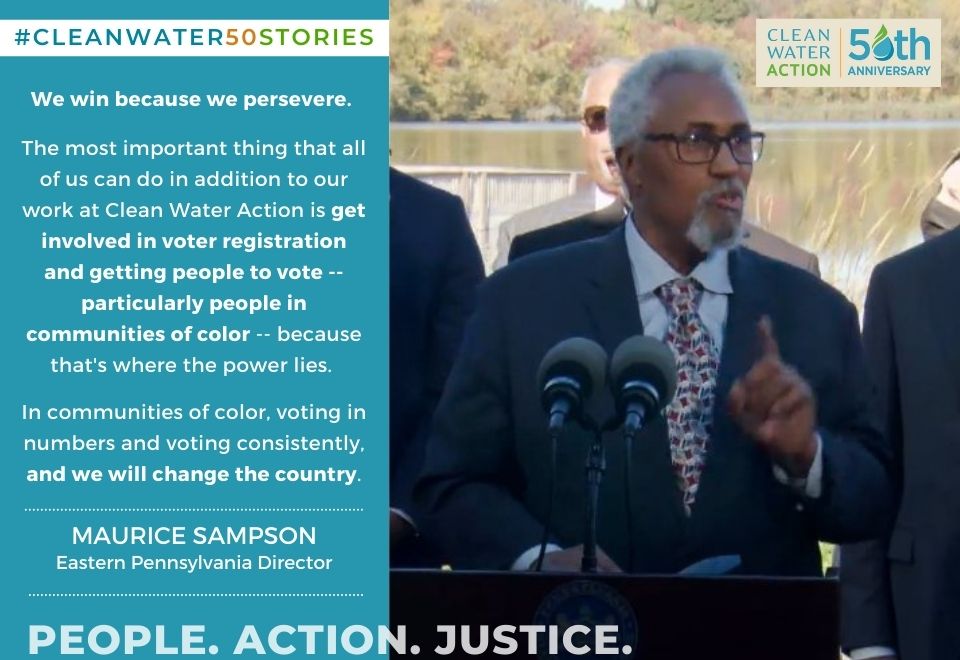 In honor of Clean Water Action's 50th birthday, we are lifting up voices and stories in the Clean Water movement through #CleanWater50Stories. Our story is the story of everyday people who have used their power to make a difference to create a healthier and greener future for all. Meet Clean Water Action's Eastern Pennsylvania Director, Maurice Sampson!

Maurice has been a grass roots environmental activist dating back to the 1970s. He fought to pass of local ordinances requiring  Environmental Impact Statements for all housing developments (Cherry Hill NJ, 1971) saving 200 acres from suburban development, to oppose highway bond issues (1973), Tocks Island Dam on the upper Delaware (1972-73), floating nuclear power plants (1975), and to support creation of the New Jersey Pinelands preservation 1974-77. He founded the Youth Environmental Society (New Brunswick, NJ), a statewide youth environmental organization that network high school and college environmental organizations through a series of annual work shops and weekend leadership retreats. He is also a sustainable waste management expert with thirty years of experience as a environmental and recycling advocate, bureaucrat and entrepreneur as well as a volunteer Chair for the RecycleNOW Philadelphia Campaign.

What is your favorite Clean Water Action story?

I think my favorite story is being at a canvas retreat at Apple Farms in New Jersey and being in front of the room with David Zwick, our founder, and the meeting turned into almost a revival session. As I pointed out to people, I had everybody identify, like how many of you have been here for more than 20 years and a bunch of hands went up. How many have been in for more than 10, actually it's the reverse of that. And it was really astounding to everybody in the room, how many of us have been here? And that's a cultural thing. That's what's unique about Clean Water, is how long we have been with this organization. I mean, we're not just an organization, we're a culture.

But that meeting just had an energy. I think it was Lynn that said, it was like a revival session. Because I asked people to commit, how many years are you willing to stay? Tell your managers that, they can plan around that if they know how many. And I don't know how many years we got to commit, but even people who have been there for 20 years, committed for another 5 and 10. But that was a wonderful moment and David, Zwick, our Founder, is somebody I got to know really well. In fact, I kept blaming him for my being in the organization, wondering, "Why didn't you let me know sooner?" And at one point he says, "I don't know. I guess I just effed up." And that was just a moment.

But probably the finest moment that we had in this organization, was I was sitting in a board meeting in 2014 and Vernice was there. I think that might have been her first year on the board. And David Baker Han, the three of us who were on the board and we had had an incident that year in one of our canvas sessions, where there was just some really upsetting things that happened to the people of color, who had come to that meeting from our office in Oakland. And the emotion and energy that happened during that session and I was at it, was intense and it was just so clear, we needed to address the issue of diversity in our organization.

And I watched as our board, as one board member talked about why the Spanish folks weren't involved, be challenged by another white member of the board as to why they should be involved in our issues. And I sat quietly with Vernice and with David and watched the white people on the board decide, we're going to become more diverse. And I remember commenting, I said, "You don't know what you're asking. Some people are going to have to leave." And they said, "Then they'll have to go." Now, this was 2014, this is long before the rest of this country jumped into this. This is not new for us. We have been working on diversity for a while. It's something that we feel is important as part of the culture of our organization. As I have talked to the other people of color in this group who have a lot of issues, I say, "You're right, we got a long way to go. If you want to know how far we've gone, join one of the other environmental organizations." Okay, all right?

We've got a lot of work to do. We're committed to it and I'm extremely proud of that and I'm really glad to be part of this organization for that reason. And I encourage those who are here, who are frustrated or concerned to express them. You're not going to get fired for bringing up your concern. And you need to know there are some who do have that concern, despite everything we've said, they do have that concern. We've got to fix this. We aren't going to cure the issue of racism in this country, if we don't talk about racism. And we're doing it and those are my two moments.

How can people make a difference in the fight for environmental justice?

You can talk about it with others. We win because we persevere. I think the most important thing that all of us can do in addition to our work at Clean Water, get involved in voter registration, get involved in getting people to vote, particularly people in communities of color, because that's where the power lies, it's in the communities of color, voting in numbers and voting consistently and we will change the country. And everything else to me is second to that because with that, we can do everything else and without that, we can't do anything.

I have learned that I need to offer advice less and be open for input. So please, don't let all the gray hair fool you, I may be old, but I've been around a little bit and I'd like you to make new mistakes. I've made a whole bunch of them, I don't want you to make the ones I made, so I can help. I see a lot. I've learned to hold my lip, but do ask. There's good advice and I'm not the only one in the organization. All of us, everyone leaves Clean Water, some stay 20 years before they do it, everyone leaves. We stay connected with each other even after we go and that's where the power is.