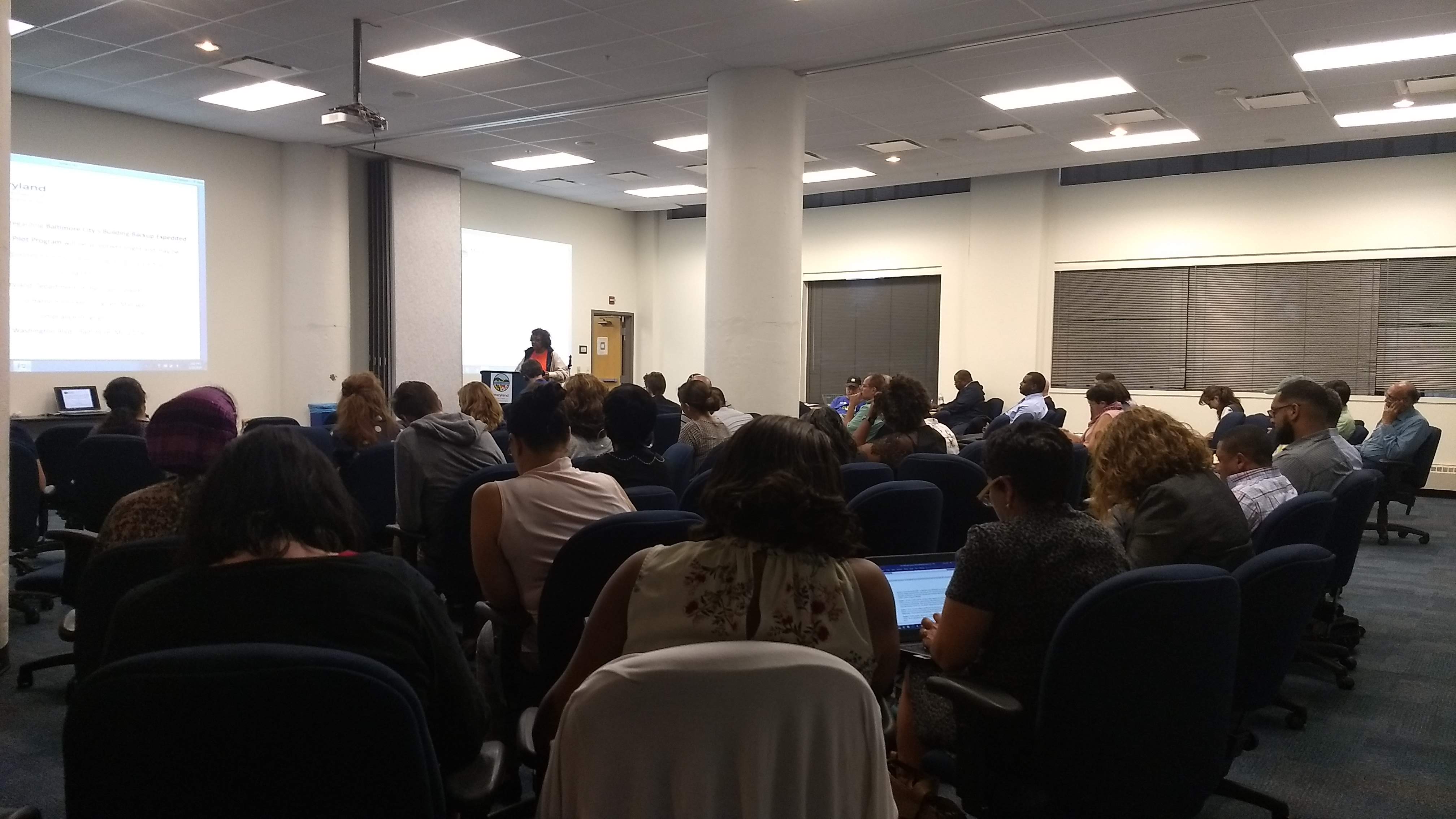 MDE listens to stories about "A Geyser of Human Waste"

On September 30, 2019, the Maryland Department of Environment held a meeting on the growing concerns surrounding the effectiveness of the “Baltimore City Building Backup Expedited Reimbursement Pilot Program”. Albeit the name of the program is long, the issues that this program remedies are concise. In general, the program is meant to compensate for the cost of the flooding of sewage within the basements of Baltimore City residents. Due to increased rainfall experienced by the Baltimore community, the aging infrastructure of the sewage pipes become backed up, leading to sewage becoming expelled through the pipes of Baltimore city residents’ home. In order to compensate for the damages that these “geysers of human waste” cause, Baltimore City has offered to help reimburse the community for the financial distress created. Outside of the emotional tole of losing personal items and replacing housing, the financial distress on local citizens can be large. From the personal accounts at the meeting, residents cited costs that varied between $3000 and $10000 for cleaning up as much as 12 to 15 inches of sewage that was expelled from their facilities.

On the surface, it can be argued that such a program would be a valued commodity to the citizens to help alleviate the effects of a changing climate and the depreciation of aging infrastructure. One can argue that it should be the role of the city to provide resources to their community members during unforeseeable natural occurrences. It is the role of public works to be responsible for the protection and preservation of life, property, evidence, and the environment. They play a vital role in disaster prevention, preparedness, mitigation, response, and recovery. Although disaster is a relative term, it can be argued that human excrement flowing from bathrooms into citizens homes causing aggregate sums of damage to one’s person would be disastrous to one’s well-being. Outside of economic costs, the effects associated with the individual’s health dealing with human waste is innumerable. With sewage backups flowing to residents’ homes, citizens handling the sewage creates breeding grounds for water borne diseases and bacterial infections. Under this position, it can be argued that it would be the role of public works and the department of the environment to be responsible to mitigate and relieve their citizens of the burden of the effects of a distress infrastructure.

The Baltimore City Building Backup Expedited Reimbursement Pilot Program is meant to be one such way. This pilot program is meant to provide citizens with a way to be reimbursed for the costs associated with “geysers of human waste.” According to the Department of Public Works, the reimbursement Pilot Program is meant allow for the “reimbursement to residential customers for cleaning and disinfection costs associated with sewage backups caused by wet weather.” However, they do stipulate that “the Expedited Reimbursement Program is limited to capacity related sewage backups caused by wet weather only. Basement backups caused by water main breaks, clogged pipes, maintenance issues, or other non-wet weather issues are not eligible for this program,” and that “documentation of all cleanup/disinfection costs must be provided, and other requirements are posted with the application. The maximum reimbursement is $2,500 per event, and DPW will process applications within 60 days.” With this program the question remains out of the allocated amount by the city government to help with the effects of sewage backup, how is it that so many citizens are denied, and how is there over a million dollars allocated to this program that is unaccounted for? It was the purpose of this meeting to hold a formal discussion to access how the reimbursement program has been working.

While attending this public meeting, it became evident that this program is not working for the residents, and that the money allocated to fulfill the mission of this program has not been used effectively. Multiple first-hand accounts show how neglectful and inaccessible this program is. Out of all the testimonies, no individual mentioned a positive experience.

One testimony argued that out of 2 sewage backups, both were denied. Albeit there do exist stipulations on the reimbursement program, the account positioned that it was not due to residential plumbing issues. Rather, it was due to surcharge from debris in the mainline, causing sewage to backup in their house. This issue of aging infrastructure is meant to be mitigated through the city and state. It is an issue for public works to be held accountable to.

This issue is exasperated by the fact that homeowner’s insurance is neglectful to claims and cost associated with a government issue. It was relayed multiple time that insurance companies will drop or argue with the resident over claims. For the citizens to go through private means, i.e. insurance, questions of riders become an issue. If the claim is submitted, then an issue of improvements is questioned. Once these issues happen multiple times, the insurance company will inform the resident that they have the potential to be dropped. Due to the neglectful nature of Public Works to rectify the depreciation of the aging infrastructure, sewage backup creates aggregate costs to the homeowner. According to firsthand testimony, cleanup of raw sewage can cost upwards of $10,000. Additionally, the costs associated with updating and improving resident’s independent sewage systems can cost over $4000, which becomes a mandatory issue for homeowners with multiple sewage backups to have in order to qualify to remain on legally required homeowner’s insurance. Consequently, the aggregate costs associated with the neglectful nature of public works can exceed well over $14,000. According to recent statistics, the median income for a Baltimore City resident is $47,131 per year, which is roughly $3,927.58 a month. This mean the cost of one sewage backup into the average single income household would be roughly 3.56 times the monthly income. Amid fears of losing insurance, these costs would come out of pocket for the affected resident. As a result, their real income would depreciate by the costs associated with a failure of public works.

The fundamental financial nature of the reimbursement is intended to mitigate this economic distress. It should be noted that sewage backup is recorded for the property where it occurred. As a result, the value of the house depreciates, leading to a decrease in value to the house. This reduces the equity of the homeowner’s assets. This increase in liabilities of covering costs for cleaning up sewage with the depreciation of assets, results in a greatly decreased cash flow available to the resident for future purchases and development. According to the statistics provided by the testimony, a $2500 reimbursement would only cover 17.86% of the total cost of the aggregate costs associated with a sewage backup. This is under the assumption that the resident would be provided with the reimbursement initially.

From the testimony, it became clear that the stipulations to attempt to receive the funds are often unsuccessful. The resident must call 311 within 24 hours of the sewage backup to have an agent of public works to come out. After 24 hours, the reimbursement program is not valid. Additionally, it became clear that knowledge of this program is not present to most residents. Then, if the claim is submitted in time, the likelihood of it being accepted is greatly reduced. Considering that thousand times a year sewage is backed up into resident homes, the city of public works should work on rectifying the aging infrastructure through capital expenditure, while informing the residents of ways to relieve the financial burden of cleaning up sewage backup. Under the premise that public works has over $1,000,000 of unaccounted allocated funds, the lack of transparency and education among affected residents create one glaring question. With thousands of geysers of human wastes perpetually flowing out of residents’ toilets, where is the money?

Click here to email your comments to the Maryland Department of the Environment and demand more and better assistance for city residents experiencing sewage backups. Comments are due by October 11!