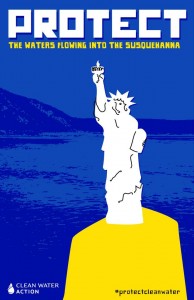 What is Oil & Gas Doing to the Susquehanna River?

In the past 7 years, the Susquehanna Watershed has seen a tremendous industrial buildout of drilling sites, frack pits, condensate tanks, compressor stations, and pipelines. What effect has these oil & gas operations in North Central Pennsylvania had on the health of the Susquehanna River Watershed? We really do not know, because the Governors of the Susquehanna states of Pennsylvania, New York, and Maryland have no answer to the question.

They have no answer because no comprehensive, multi-state cumulative impact study has ever been done focusing on measuring oil & gas impacts on water quality in the Susquehanna. And we need to find out because the ultimate health of millions of Pennsylvanians, not to mention the fish and plant species in streams and the Susquehanna, depends on the quality of our water.

The Susquehanna River Basin Commission (SRBC) can conduct such a study but only if the Governors of New York, Maryland, and Pennsylvania in concert with the US Army Corps of Engineers decide that it should happen.

Clean Water Action has led a tri-state coalition of organizations seeking to get the SRBC to conduct this study. Before last year’s Pennsylvania gubernatorial election, Clean Water Action and the Sierra Club secured a promise from candidate Tom Wolf to support such a study if he was elected.

On April 23rd, Clean Water Action, the Sierra Club, and the Lower Susquehanna Riverkeeper met with a representative of Governor Wolf to discuss how they are going to help us make this study a reality. The Governor’s Office requested information on how much our proposal for the cumulative impact study would cost. We worked with experts to develop an outline of a protocol for the study. A protocol looks at what specifically the scientists would be looking at and how they will proceed. We promised to meet with staff from the SRBC to get their best estimate of what the study would cost. The Governor’s Office promised to think through the problems of putting all of this together from their end as well.

Soon we will have all of the facts and figures that we need. Then it will be up to Governor Wolf in Pennsylvania, and up to our Susquehanna Coalition’s organizations to convince the Governors of Maryland and New York and the Federal Government that this study should happen.

We really need to know the answer to our question. What is all of this Oil & Gas industrial development doing to our Susquehanna?

Right now, we have no idea.