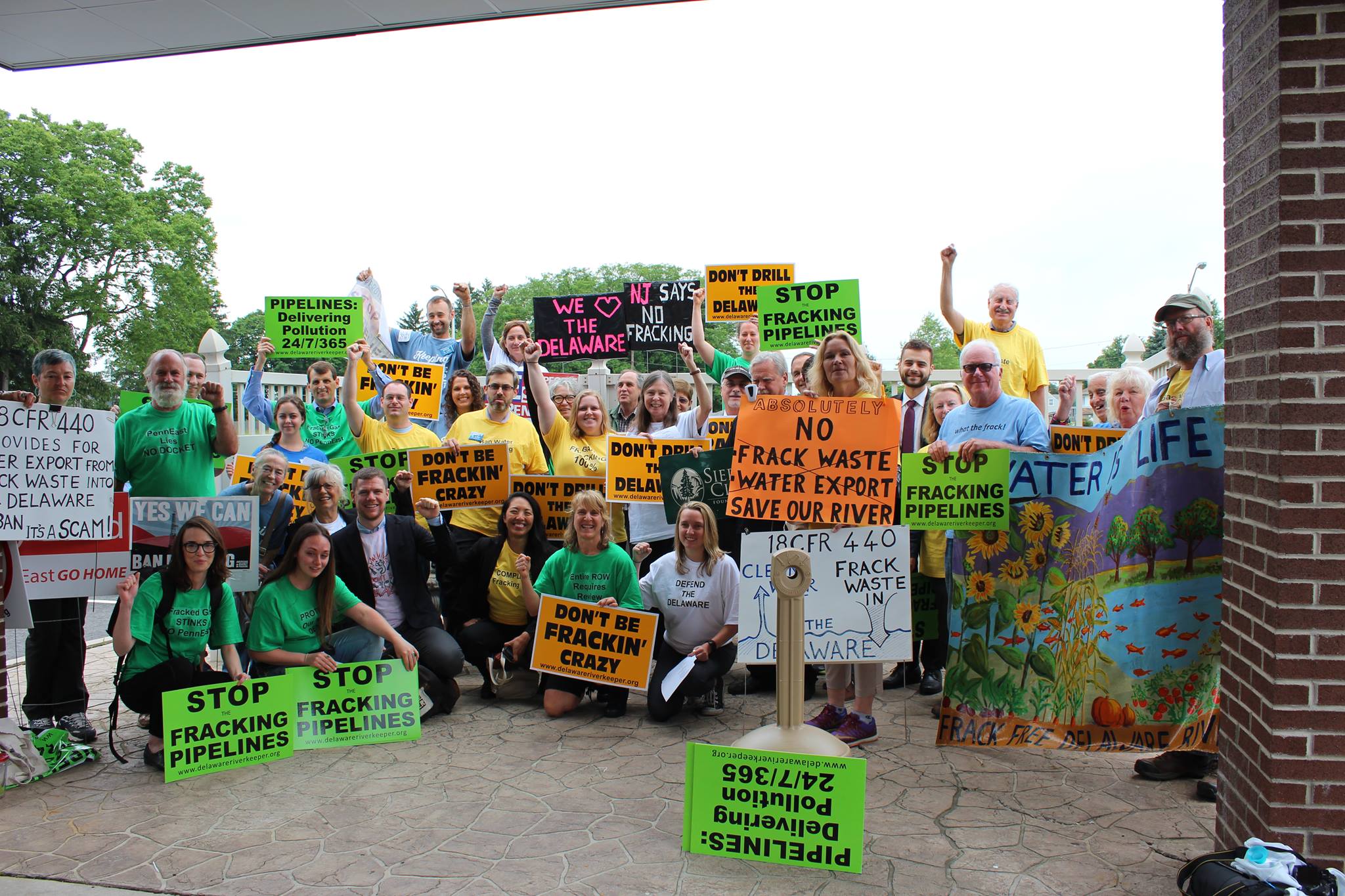 The Coalition and hundreds of thousands of members of the public had called for the
DRBC to vote for a COMPLETE ban on fracking wastewater imports and the export of
water for fracking from the Delaware River Watershed, with nearly 12,000 comments
during the public comment period. The final rulemaking, however, allows fracking
wastewater imports and water exports for fracking.

The Coalition announces its commitment to continuing our collective struggle to protect
our watershed from the ravages of fracking and its polluting operations. Even though
the DRBC has stopped short, the Coalition and our watershed community will not. The
Coalition will not let fracking pollution overrun our cherished river, its watershed and
those who live here. The struggle to defend the Delaware River Watershed carries on.

The Coalition does highlight that one important proposed prohibition that was included
in the draft rules and remained in the final adopted rule was a prohibition on the
discharge to water or land of wastewater produced by high volume hydraulic fracturing
(HVHF or “fracking”). This provision received broad public support; the Coalition
considered it an absolute necessity and spoke in strong support of this proposal. While
the Coalition applauds the inclusion of this prohibition in the final rules, the Coalition is
making clear that it only goes part way towards the protection needed for the watershed
and its communities.

Despite the extensive record submitted by the public and Coalition organizations
regarding the damaging impacts of fracking wastewater, the final rules allow fracking
wastewater to be imported, transported, stored, processed, treated, and reused in the
watershed. The DRBC themselves produced an extensive body of evidence in its 2021
documentation of why it banned fracking in the basin, including the threat of depletion
and degradation of fragile water resources that are the sole source of drinking water for
millions and are essential for economic vitality in our region. But despite its own
recognition of the threat to water quality, ecosystems, and public health posed by the
toxic wastewater that is produced by fracking, DRBC did not fully protect our watershed
and communities from the dangers and hazards of frack waste.

Among other hazards posed by the just passed rules, polluting hazardous air emissions
will occur from fracking wastewater processing such as evaporative and incineration
systems because DRBC does not regulate air emissions, meaning the control will fall to
the watershed states that themselves allow these systems and therefore do not provide
essential protection. Of additional concern, wastewater produced by what is termed
“conventional” gas drilling (which also employs fracking and produces toxic and
radioactive wastewater) is not covered at all by the final rule – it can be discharged to
water, land, used on roadways, injected for disposal, etc.

Power plants and manufacturing such as cement making are allowed to use so-called
“recycled beneficial use” wastewater, an invitation to importers. Wastewater tank
facilities that are used in Pennsylvania to store fracking wastewater for years on end are
also allowed under the final rules, despite numerous reports that spills, leaks, and
venting from containers and transport are a major source of pollution caused by fracking
nationwide.

The adopted rulemaking was slightly amended from the draft fracking wastewater/water
rules that were proposed in October 2021. Changes to the rules included clarification
that the rules also banned:

Statements about the requirement to contain pollutants to prevent spills of wastewater
were included in the final rule but it is already illegal to discharge pollution in all of the
Watershed states. The final rule also:

“For over a decade the communities of the Delaware River valley have known they were
protected from the direct ravages of fracking, and been proud in the knowledge that we
were not helping to perpetuate the harms of this industry on other communities or future
generations. That peace of mind, on both fronts, has now been taken by the Delaware
River Basin Commission and its decision to allow our communities to become host to
toxic frack wastewater and the source of water that will allow the industry to grow in its
footprint and harm,” stated Maya van Rossum, the Delaware Riverkeeper.

“That DRBC chose to explicitly state that they are not regulating “conventional fracking
waste and thereby inviting it into the Delaware Basin is horrifying,” said B. Arrindell,
Director of Damascus Citizens for Sustainability. She continued, “It has been shown
that increased trucking is tied to increased spills, accidents, and illegal dumping. The
final rule does not take into account that the oil and gas workers are exempted from
most OSHA rules so for example, can be driving exhausting hours resulting in more
accidents.”

“For Delawareans, there is no difference between allowing fracking and allowing
importation of fracking waste. Only a complete ban will keep radioactive materials from
contaminating the Delaware River. No treatment system in use removes these materials
from water that is returned to streams. These radionuclides will remain in the sediment
of the estuary and bay, poisoning the food chain for thousands of years,” said Coralie
Pryde of the League of Women Voters of Delaware.

"Allowing the transportation, storage, evaporation or treatment of frack waste into the
Delaware Basin is a disaster waiting to happen," said Jeff Tittel, Environmental
Activist. “The Governors need to keep their commitment and put a complete ban on
fracking in place.”

“The future of the Delaware River Watershed is in grave jeopardy now that DRBC has
opened the Watershed’s doors to fracking wastewater. But we will fight on, resisting
every attempt the industry makes to dump its waste here and take our water to ruin
other watersheds by fracking,” said Tracy Carluccio, Deputy Director, Delaware
Riverkeeper Network.

“The Delaware River Basin Commission missed an important opportunity to ban
fracking-related activity fully in the Basin, resulting in regulations that do not go far
enough to protect our waters and our health. We need regulations that include a ban on
the import of frack wastewater and the export of water for fracking,” said Taylor
McFarland, Conservation Program Manager for the Sierra Club, New Jersey
Chapter. “Without a complete ban on using our water for fracking-related activities, we
still proliferate an industry that is jeopardizing public health, the environment, and our
tourism and fishing industries from hazardous fracking waste.”

“Last year’s action by DRBC on banning fracking activities was crystal clear – fracking
activities were too much of a threat for the region’s drinking water. DRBC’s action on
fracking waste instead is a blinking red light instead of a stop sign to ban fracking waste.
The job is not done because the Delaware River watershed should not be used as a
conduit for the ravaging impacts of fracking waste on our environment and our
watershed. We urge the DRBC Commissioners to return to this issue to fix these
loopholes to ensure there is an outright ban on all fracking activities across the
Delaware River watershed,” said Doug O’Malley, Director of Environment New
Jersey.

“Regulations have never worked to make fracking safe. Regulations enforced by the
Pennsylvania DEP have worked even worse. Although the Commissioners’ vote affects
the entire watershed, the likelihood is that Pennsylvania, the source of the problem, will
also be the place where most of the activity occurs. Our current governor, like his fellow
Commissioners, promised a full ban. Our new governor who as AG cited the regulatory
failures of our DEP needs to lead his colleagues toward achieving the full fracking ban
that will protect the watershed from the industry, and in PA, from our regulators,” said
Karen Feridun, Founder, Berks Gas Truth.

“The fossil fuel industry can’t be trusted, and we can never be sure what loopholes they
might find to exploit our region’s environment at the cost of human lives and the planet’s
health. Anything less than a complete ban on fracking activities–including the import
and export of toxic fracking wastewater–leaves the Delaware Basin vulnerable to
contamination by this climate trashing industry. Until the Delaware River Basin
Commission bans all fracking activities in the Delaware River Basin, we will continue to
push them to protect this nationally important watershed,” said Wes Gillingham,
Catskill Mountainkeeper.

“We have been calling for a full and total ban on fracking activities including water
withdrawals and frack waste imports. Unfortunately the DRBC did not deliver, so instead
of finding closure after more than a dozen years of campaigning, we must renew our
commitment to keep fighting,” said Eric Benson, Clean Water Action. “The Delaware
River Basin is too precious of a resource to put at risk from dangerous, toxic, frack
waste”.

The campaign for a FULL ban launched in 2017 when the DRBC issued the 2017-2018
iteration of draft fracking water regulations and continued after the DRBC banned
fracking in the watershed that is contained in the four states that make up the Delaware
River Basin. In 2018, 104,000 signed petitions were submitted to the DRBC
Commissioners, the voting members of the DRBC – the Governors of New York, New
Jersey, Pennsylvania, and Delaware and the Army Corps of Engineers representing
President Biden – calling for a FULL ban.

After 10 years of a de facto moratorium imposed in the Basin by the DRBC on fracking,
water export for fracking, and fracking wastewater treatment, fought for by the public,
the agency permanently banned fracking in February 2021.

When the draft fracking wastewater/water rules were proposed in October 2021 without
a full ban, nearly 12,000 people submitted comments to the DRBC during the comment
period that closed February 28, 2022, virtually all calling for the FULL fracking ban. A
public sign on letter submitted last month to the DRBC Commissioners was signed by
191 organizations and 7,575 individuals calling for the FULL fracking ban. This issue
has ceaselessly gripped the entire region and has earned a national profile.

The Delaware, the longest undammed river east of the Mississippi, is a Wild and Scenic
River, a National Estuary, home to biologically diverse and treasured iconic species,
some of which are gravely endangered, and the source of drinking water for up to 17
million people, including New York City and the greater Philadelphia region. Over 8
million people live and work within the Basin and rely on the highly valuable yet
vulnerable assets the river provides. Fracking in Pennsylvania is widely recognized as
causing devastating human health harms and long-lived unmitigated environmental
damage. The climate impacts of the release of methane by fracking and its operations is
well documented by scientists as a major driver of atmospheric warming, feeding the
climate crisis.