Letter from the Director: What’s at Stake this November?

Over the past year, Clean Water Action has fended off attacks at the local, state and federal levels, from corporate polluters like Enbridge Energy to wait-and-see politicians who put the interests of their campaign contributors above the interests of their constituents. This November, we have the opportunity — no, the obligation — to make our voices heard by casting our votes for candidates and ballot questions that will prioritize our drinking water, Great Lakes, and communities.

There is no shortage of battles to be fought — Line 5, Nestle, PFAS, Flint — but we are committed to these fights. We know that when elected officials in Lansing and D.C. understand the science and lead with empathy and compassion, our Great Lakes and communities benefit. Clean Water Action has spent the past two months knocking on doors, making calls, and talking to voters to ensure that this November we elect individuals that share our priorities and truly value our most precious natural resources. We have a lot of work to do yet to win this November and beyond. Our staff, volunteers and members are engaged and working hard — because they know what’s at stake.

Unfortunately, our water and public health have been held hostage by elected officials who care more about their campaign contributors than about their constituents. You can play a role in ending that this November. Holding elected officials accountable is critical to ensure our democracy functions on behalf of Michigan families and our environment.

You’ve heard from us about Attorney General Bill Schuette before. For the last eight years he has had the authority to decommission Enbridge’s dangerous, corroding Line 5 pipeline in the Straits of Mackinac and has chosen not to. You’ve also heard from us about how he played politics with the Flint water crisis, challenging a court order that the state deliver water to Flint residents while publicly supporting the water deliveries. Bill Schuette has sued EPA more than any other attorney general in the United States. Recently, he joined Exxon in a suit that claims climate change is “unsettled science”.

What’s at stake? Bill Schuette is running for Governor. Let’s be clear — Bill Schuette is just one example of many in Washington and Lansing who continue to support polluting industries at the expense of their constituents and our Great Lakes. But you and I both know one thing: dollars don’t vote, people do. This November, let’s vote for the environment by electing people who care about our kids, our future, and our Great Lakes.

The Snyder-Schuette Plan to Keep the Great Lakes at Risk

On July 6, 2010, Enbridge Line 6B ruptured, spilling over 1 million gallons of tar sands oil into Talmadge Creek and the Kalamazoo River. In the aftermath of the spill, environmental and public health advocates began looking at Enbridge’s lakehead pipeline system for other vulnerabilities, hoping to avoid a second catastrophe. It was at that point that Clean Water Action and other groups began a public awareness campaign around Line 5, a pipeline that is older than Line 6B was, in worse condition, and located in the worst possible place in the Great Lakes for an oil spill.

For over seven years, public concern about Line 5 grew to outrage as the Snyder administration and Attorney General Bill Schuette talked tough, but did nothing to solve the problem. The administration did what the Snyder folks have always been good at — they made themselves look busy. They founded task forces and advisory boards that were stocked with oil and gas industry insiders, commissioned industry-funded and industry-supervised studies that obfuscated the facts about the condition of the pipeline, and generally attempted to make Michiganders look one way, while making the real decisions in secret deals with Enbridge behind closed doors. This administrative sleight of hand has made some who value the Great Lakes believe Snyder’s message of increased safety for the pipeline, even though the reality is far different.

Independent experts who have studied Line 5 believe it could be just one bad storm away from rupturing and destroying Michigan’s tourism and fishing indus- tries, as well as the waters we rely on and over 700 miles of shoreline in lakes Michigan and Huron.

Now Governor Snyder has announced another backroom deal with Enbridge. This time, attempting to fast track approvals for Enbridge to build a new pipeline in a tunnel under the Straits of Mackinac. After seven years of inaction, wasting state resources, and buying Enbridge’s lies, Snyder is attempting to reward Enbridge for their political fealty to conservative causes by allowing them to keep running oil through a place where every independent expert agrees the risk of a spill is far too great. A tunnel simply does not solve the problem, especially one that would fall well short of compliance with environmental laws. Any construction in and under the waters of the Great Lakes must be subject to full environmental impact studies under the Great Lakes Submerged Lands Act and the Michigan Environmental Policy Act.

Join Clean Water Action and people across the country who value our Great Lakes in calling on the Mackinac Bridge Authority to reject this abuse of power by the Governor and stop this deal from moving forward.

▶TAKE ACTION: For years, Enbridge Energy has kept the Great Lakes at risk for a catastrophic oil spill by continuing to operate the outdated and corroding Line 5 pipeline. At the end of his administration, Governor Snyder is now seeking to keep the Great Lakes at risk for years to come by striking another backroom deal with Enbridge, and using the Mackinac Bridge Authority board to circumvent environmental laws in order to build a Line 5 oil tunnel through the Straits of Mackinac. Tell the Mackinac Bridge Authority to reject this disastrous proposal.

Vote Environment: Clean Water Action is pleased to announce our Michigan endorsements for the 2018 elections.

See how your Representative scored on our Congressional Scorecard!

Michigan’s general election is Tuesday, November 6th. Polls are open from 7:00 a.m. until 8:00 p.m. Make a plan to get to the ballot box in November. Some communities offer early voting options, too — call your local clerk to find out more. Read more at: www.cleanwater.org/miendorsements

Paid for by Clean Wave, www.cleanwater.org/cleanwave and not authorized by any candidate or candidate committee. For more information, email cleanwave@cleanwater.org or mail Clean Water Action, 23885 Denton Suite B, Clinton Township, MI 48036 and 1444 I Street, Suite 400, Washington, DC 20005.

Vote to End Gerrymandering this November!

Every ten years following the U.S. Census, each state goes through a redistricting process, changing the size and shape of our legislative districts based on population changes. There is no federal law mandating how states approach the redistricting process. In Michigan and several other states, the map drawing process is handled by the party in control of the state legislature.

Giving lawmakers the ability to draw their own districts has been catastrophic for voter representation across the country. Regardless of which of the two major parties controls the redistricting process, the results have been the same. The party in power redistricts, or “gerrymanders” the districts to their own benefit in an attempt to create fewer competitive districts, essentially giving voters less of a choice in their representation, and cementing their party’s control over the legislative process for a decade to come.

This year, Michigan voters will decide whether or not we continue to give the party in power the ability to cement their control over our state government. The Voters Not Politicians ballot initiative, Proposal 2 on the ballot this year, proposes a new way forward for Michigan with an independent redistricting commission made up of regular Michigan residents, not politicians or paid party operatives. Several states including red states like Arizona and blue states like California have already established independent redistricting commissions, with encouraging results. States with independent commissions tend to see increases in voter participation and voter confidence, which we sorely need in Michigan. Join Clean Water Action in supporting the Voters Not Politicians ballot initiative. The continued strength of our democracy depends on it.

In Michigan, you are eligible to vote if you are:

How to Vote: Polls are open Tuesday, November 6th from 7:00 a.m. until 8:00 p.m. Stay in line — You are able to vote as long as you are in line by 8pm! Bring your ID. If you do not have an ID, you are still able to vote by signing an affidavit at your polling location.

Vote the entire ballot. The front side of your ballot has the partisan races. Be sure to vote in each race — straight ticket party voting is not an option this year. Flip your ballot over and be sure to vote for the proposals too — Yes on Props 2 and 3!

To view your ballot or find your polling location, please visit www.michigan.gov/vote.

If you are denied the right to vote or witness voter intimidation or suppression at your polling location, please call 1-866-OUR-VOTE. 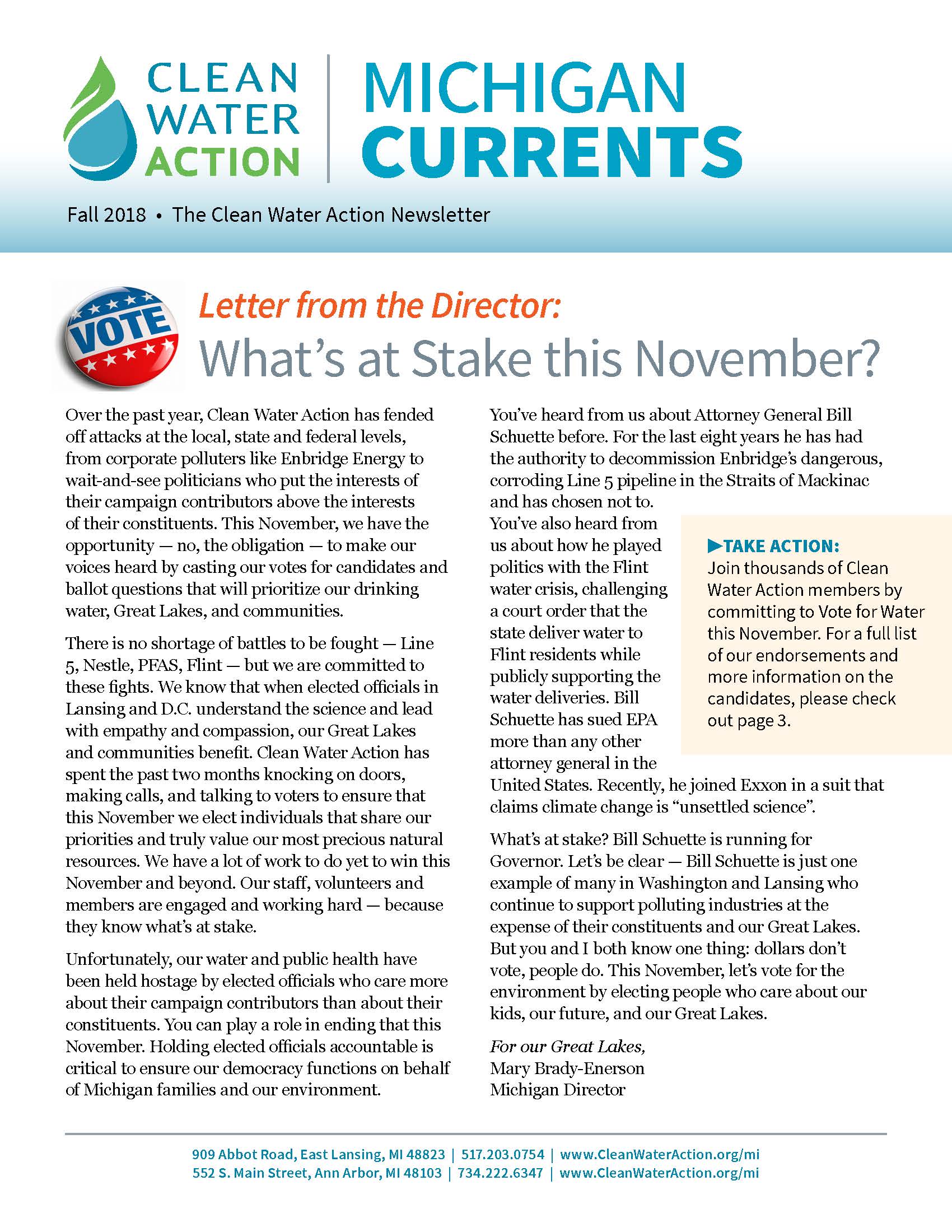