Thank you for highlighting the issue of litter and marine debris in your State of the State address to the General Assembly last night. Despite decades of anti-littering efforts and an increase in access to single-stream recycling in the state, litter and marine debris continue to be a persistent and growing environmental problem, both along the shore and in our inland communities. This pollution is not only unsightly but it degrades water quality, fouls our beaches and coastal habitats, is ingested by shorebirds and marine life, creates more work for cities and towns, and impacts businesses dependent on a clean and healthy environment.

The organizations cosigning this letter have worked for decades to educate the public about the importance of proper waste disposal; some of us additionally lead volunteer cleanups. While these efforts have had – and continue to have – a positive impact on the problem, public education and volunteer cleanups are not enough to adequately address the problem. We also need to adopt laws and regulations that have been proven to be effective in reducing litter and improving recycling. That’s why we will be asking the General Assembly this year to pass a container deposit law (a.k.a. “Bottle Bill”) which is the single most impactful policy we can adopt to reduce litter in the state. We hope that you will support this effort.

Most of our neighboring states (MA, CT, NY, ME, VT) have had container deposit laws on the books for decades, which means that we have the benefit of their evidence to understand how laws, like the Bottle Bill, work. A study by the Container Recycling Institute of the effects of “bottle bills” when first adopted in the U.S. showed a consistent 70-84% reduction in beverage container litter and a 34-47% reduction in total litter.1 In addition to their efficacy in reducing litter, recycling rates for glass, aluminum, and PET plastic in states with deposit return systems are more than double the rates in states without one, and their litter rates are 30% lower.2

A deposit return system would have minimal impact on the state budget, and achieve far greater results than litter pickup programs. Bottle bills have been shown to benefit local economies by reducing waste management costs for cities and towns, and creating jobs in retail, distribution and recycling. Furthermore, deposit return systems complement existing curbside recycling programs. We are confident that Rhode Island can learn from the highest-performing deposit return systems and design a system that will serve as a model for the rest of the country.

Thank you again for making the issue of litter a priority. Our organizations look forward to working with you and your administration to support initiatives and policies that reduce pollution, combat litter and improve recycling. We would be happy to meet at your convenience to discuss our ideas in more detail.

Topher Hamblett
Director of Advocacy
Save The Bay

Mary Lou Nicholson
Be The Solution to Pollution 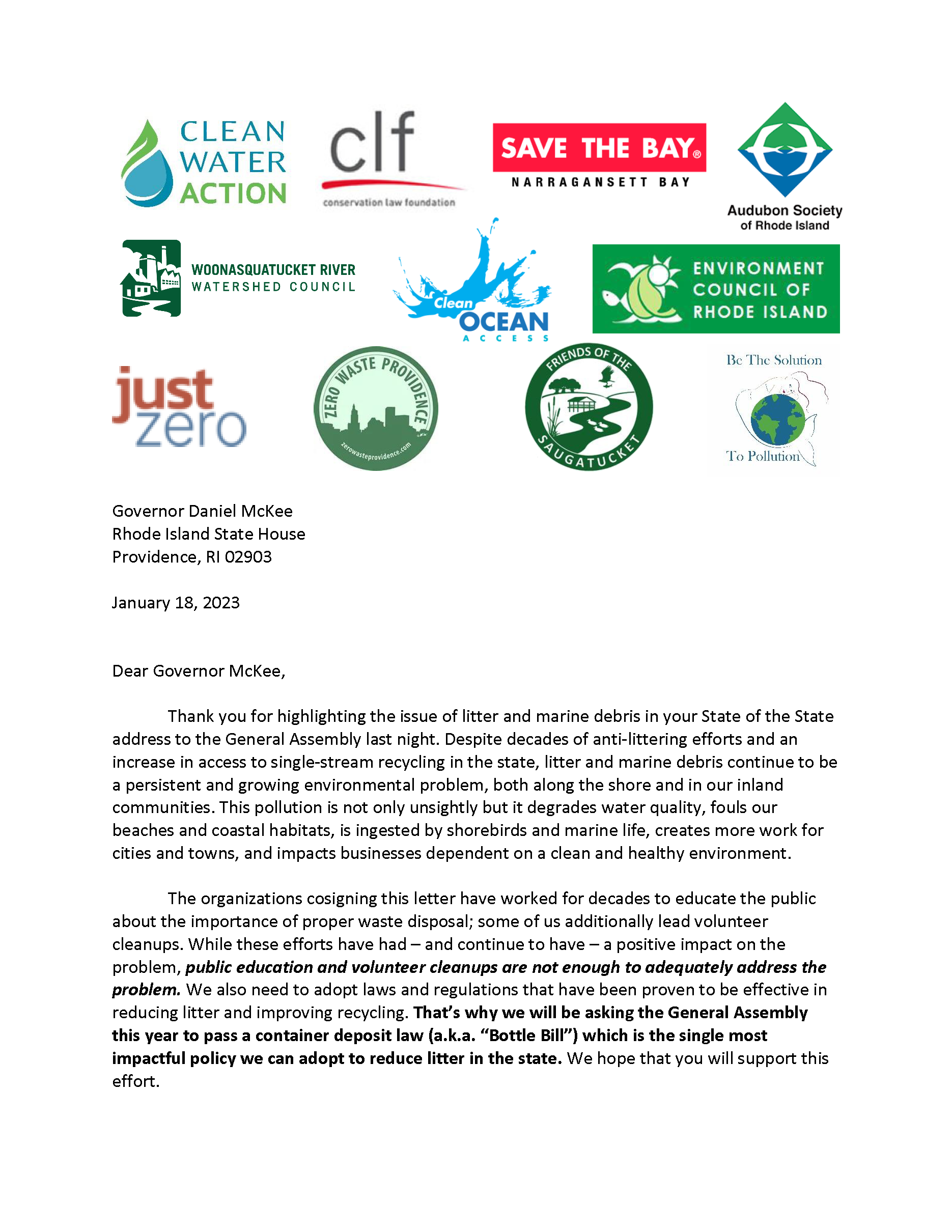 A new coalition of state environmental organizations, the Rhode Island Zero Waste Coalition, have sent a joint letter to Governor Dan McKee asking him to support a container deposit law, or “bottle bill,” to fight plastic pollution and increase recycling in Rhode Island.