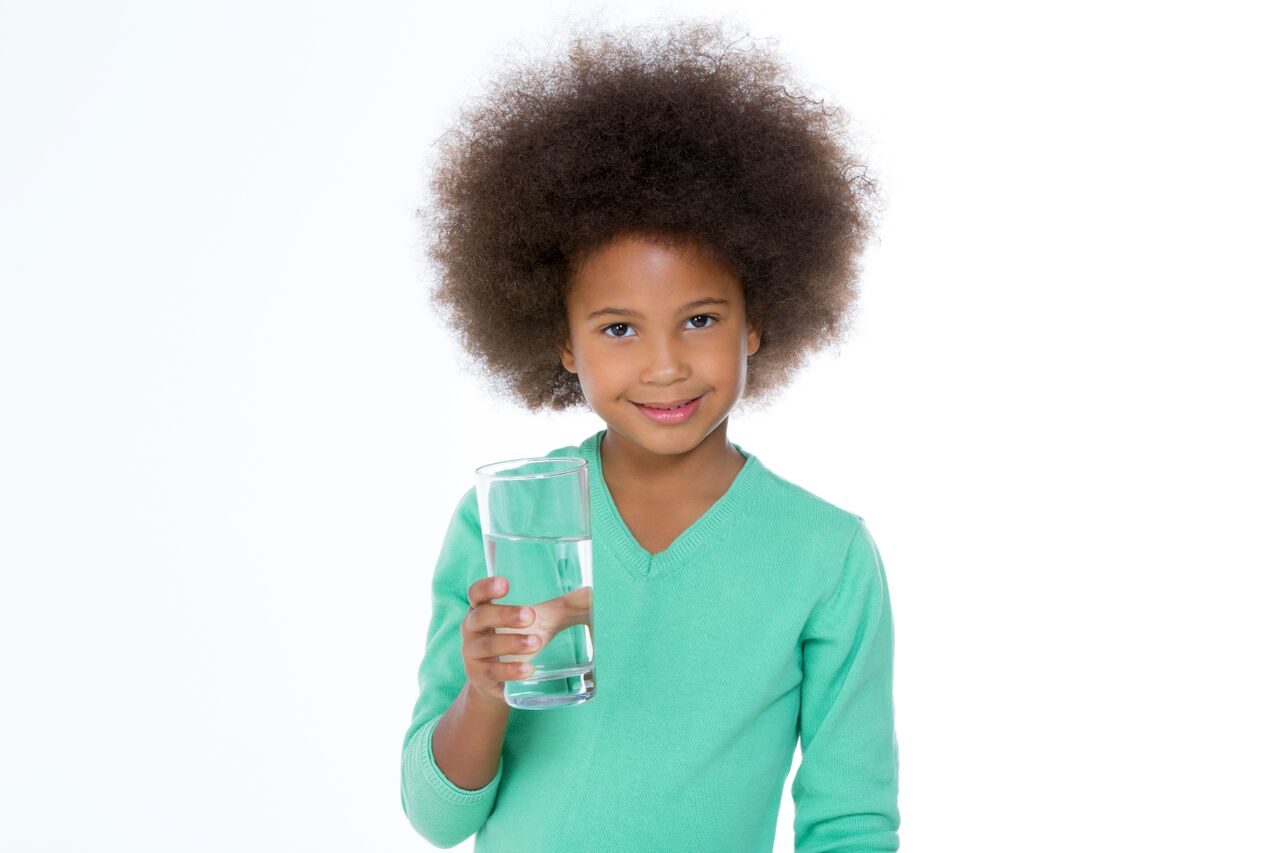 Lead is a highly poisonous metal and can affect almost every organ in the body and the nervous system. It is a naturally occurring element found, due to human activity, in all parts of our environment.

No one, especially our kids - NJ’s future leaders and innovators - should be drinking lead contaminated water in their schools and homes. Infants on formula receive 40-60% of their lead intake from water. Pregnant women run the risk of passing their lead load to their developing fetuses via the placenta.

“Lead in drinking water” is an environmental, health and infrastructure crisis - NOT because lead is found in the original source water, but leaching from the pipes and fixtures. Bottled water, flushing, point of use filters, adjusting utility-based corrosion control, and/or shutting off water outlets from potable use do not solve the problem and often fail to protect when not maintained. The infrastructure investments we make today in replacing lead pipes and fixtures will both spur immediate job opportunities and economic revitalization in low income and of color communities. This is not just a Newark problem, but a state and national issue.

To protect public health, we must reduce lead exposure at the drinking water tap. To make this a reality, Clean Water Action is advocating for the following in New Jersey and nationwide: 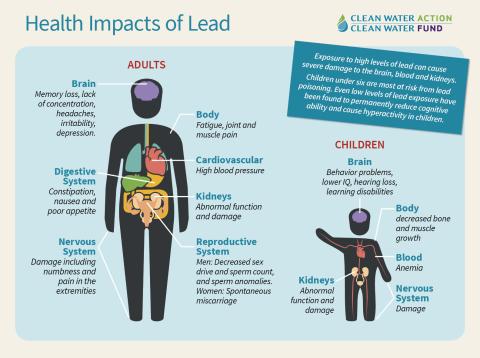 Reducing Lead at the Tap 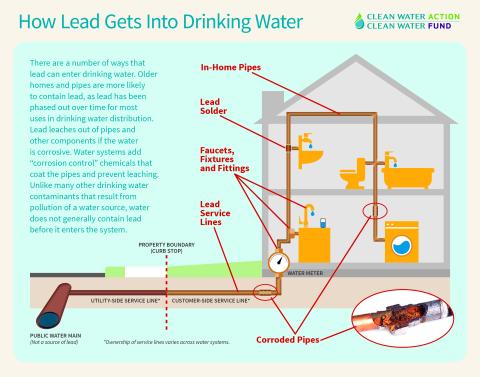 There are a number of ways that water systems work to reduce lead in drinking water:

If there is lead in your drinking water , there are ways to reduce exposure:

New Jersey has historically been a leader in researching potential threats to the health and safety of our state's public drinking water supply, as well as implementing testing and treatment protocols that go beyond the federal minimum safeguards (e.g. arsenic). Unfortunately, there are still hundreds of unregulated chemicals found in New Jersey’s drinking water, and we’ve only developed standards for a few dozen over the past 30 years (PFAS being the most recent). NJ could again be a research and development leader, as well as employer of water utility innovations and upgraded infrastructure.0

At Clean Water Action’s request, the McGreevey Administration implemented pilot programs to establish carbon filtration at drinking water treatment plants when certain thresholds (proximity to contaminated sites, wastewater treatment plants, etc.) were met. Results demonstrated the effectiveness of the technology to remove hundreds of unregulated contaminants, many of which are suspected to cause harm but have no standards set nor are expected to be established in the foreseeable future. Access to clean and safe tap water should be a right not a privilege, particularly in low-income communities where residents cannot afford to install expensive home water filtration systems or purchase bottled water. To protect drinking water, we must protect water from watershed to water tap. To make this a reality, Clean Water Action is advocating for the following:

Clean Water Action is working with the NJ Department of Environmental Protection (NJDEP) to ensure there are increased Category 1 (C-1) protections for New Jersey's waterways. C1 waters are those waters targeted for no measurable change in water quality under the surface water quality standards - the highest level of protection under the Clean Water Act. The regulatory impact of being designated as a C-1 surface water includes triggering of 300-foot riparian buffer areas on either side of the waterway and its tributaries in which development is either prohibited or greatly restricted under the NJDEP's flood hazard area or stormwater regulations. Learn more here.

8 years ago, a list of potential C-1 stream and corridor classifications was created about 8 years ago, but has not seen advancement. The NJDEP should be directed to move forward on these designations, placing a priority on those that will protect drinking water.

There are over 80,000 chemicals produced around the world with 10,000 new ones being created every year. Yet, virtually no testing is being done before being incorporated into products or ultimately gets into the environment.

While over 600 substances have commonly been found in drinking water, only 91 are being tested for in New Jersey (and fewer, 84, are mandated by federal law). With the reauthorization of the Federal Safe Drinking Water Act in 1996, the US Environmental Protection Agency (EPA) was required to establish a rigorous schedule for evaluating and setting standards for additional contaminants; but the agency is not keeping page.

It took 60 years for the U.S. to adopt a more health protective standard for a universally undisputed human carcinogen, arsenic, changing the standard from 60 to 10 parts per billion (ppb), with New Jersey being even stricter at 5 ppb. We are currently pushing stronger testing standards for PFOA, Radon, and Perchlorate and other contaminants, including pushing for pilot carbon filtration projects to remove a broader range of "unregulated" contaminants from drinking water.

PFOA is a highly toxic chemical used to make non-stick cookware. The NJDEP has found the substance in public water supply systems in New Jersey and NJDEP scientists have recommended that four water suppliers reduce the levels of PFOAs to 40 parts per trillion in order to protect the public. However, the chemical industry led by Dupont with some support from NJDEP management is fighting back against this recommendation and only testing levels down to 500 parts per trillion.

DuPont, the only company in the US that still manufactures PFOA, claims there is no proof of harms to human health. However, PFOA was labeled a "likely" human carcinogen by the EPA's Science Advisory Board in January of 2006 and has been the subject of multi-million dollar lawsuit settlements and EPA enforcement actions.

Radon is a naturally occurring radioactive element found in groundwater and air. Drinking water that contains radon is not believed to cause a significant health risk, but a high airborne radon level is linked to increased risk of lung cancer. Radon is measured in Pico Curies per Liter (pCi/L).

The EPA estimates that 10,000 pCi/L in water translates to about 1 pCi/L in air. While there are no U.S. EPA standards for radon in water now, a maximum contaminant level (mcl) of 300 pCi/L for public water supplies is being considered by the U.S. EPA. Based on their pilot study, the average waterborne radon level in public groundwater supplies in the United States is 353 pCi/L.

Perchlorate (rocket fuel) is a contaminant that impacts the drinking water of millions of people in the U.S. Two U.S. Senate bills aim to address perchlorate (rocket fuel) contamination and cleanup. The Perchlorate Monitoring and Right-to-Know Act requires perchlorate to be a listed contaminant in consumer confidence report and requires EPA to issue a health advisory for perchlorate in drinking water and regulation requiring monitoring in public water supplies for the compound. Protecting Pregnant Women and Children from Perchlorate Act calls for the health advisory and development of a national primary drinking water standard for the contaminant under the Safe Drinking Water Act. New Jersey, along with California and Massachusets have been leading the charge for strict perchlorate drinking water standards at the state level. However, the NJDEP have been sitting for years on a DWQI advised standard to adopt a 5 parts per billion (ppb) MCL for perchlorate.

For more information on drinking water testing standards and contaminants, contact us at njcwa@cleanwater.org.