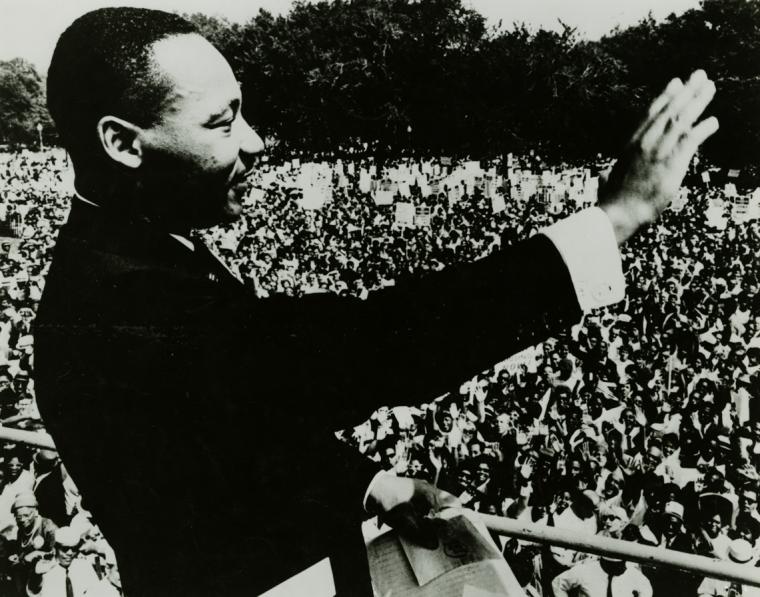 Today is a day of celebration as we honor the life, legacy and impact of Dr. Martin Luther King Jr., a minister, civil rights leader, and organizer who fought tirelessly for African Americans to have equality and justice in America.

It is hard to believe that August 2023 will commemorate the 60th anniversary of the March on Washington, orchestrated by Dr. King - a day that led to the passage of the Civil Rights Act of 1964 and the National Voting Rights Act of 1965, which legally ended segregation in America. Through grassroots, peaceful organizing, the King Center in Atlanta, GA reports that Dr. King, through the Civil Rights Movement “achieved more genuine progress toward racial equality in America than the previous 350 years.” Amazing!

For his incredible accomplishments, Dr. King was awarded the Nobel Peace Prize in 1964 and was named Time Magazine's Man of the Year in 1963 and 1964. He was awarded a posthumous Presidential Medal of Freedom in 1977 and the Congressional Gold Medal in 2004 with this notable national American holiday being named in his honor - Martin Luther King, Jr. Day.

So how do we celebrate such a distinguished man who changed the course of history? A man who was a civil rights legend who with dignity and discipline led the Montgomery Bus Boycott and the Freedom Movement that resulted in the passage of landmark legislation. A human rights icon who despite being confronted with violence and physical harm at every turn, boldly stood on the steps of the Lincoln Memorial in Washington DC in 1963 declaring that he had a dream of freedom, equality and justice for all people. An organizer who strategically created a realistic pathway to bring that dream to fruition until he took his very last breath.

We believe that there is no greater way to show our gratitude than to continue to fuel Dr. King's dream with action – and that starts from within!

You may have noticed Clean Water Action’s tagline – People. Action. Justice. These are not mere words – we live them every day as we advocate for clean water and environmental justice for all people.

Something tells us that if Dr. King were here today, he would stand with us!

In 1964, after the passage of the Civil Rights Act, Dr. King demonstrated his commitment to environmental justice when he marched with black sanitation workers in protesting polluted and hazardous work conditions in Memphis, TN - workers who were being subjected to toxic substances plaguing their communities.

Sadly, six decades later, low income communities and communities of color continue to be targeted as sites for oil and gas infrastructure, landfills, and hazardous waste dumps diminishing the quality of air, water, and land - causing immense damage and health issues that are sometimes deadly.

Today, we echo Dr. King’s remarks made in his iconic “I Have a Dream” speech in Washington DC, “We are not satisfied, and we will not be satisfied until justice rolls down like waters, and righteousness like a mighty stream.”

It’s clear - We must march on! We will march on!

Clean Water Action and Clean Water Fund are committed to justice, equity, diversity, and inclusion and are working to create an anti-racist and multicultural work environment where employees have equal opportunities with avenues for advancement. We are dedicated to continuing to identify how racism and other oppressions have affected our organization and are taking steps to eliminate these oppressions, with a goal of ending racism in our society.

Through our grassroots efforts, we are committed to ensuring that equity and justice are incorporated into environmental and health policies as we support overburdened communities that frequently bear the burden of pollution and environmental degradation. We will continue to be a part of the solution for change by bringing issue expertise, solution-oriented thinking, and people power to the table – a vision that has been at the center of our organization since its founding in 1972.

We salute Dr. Martin Luther King, Jr. for his extraordinary triumphs. His legacy lives on and his dream continues to be carried out by his family, including his daughter, Dr. Bernice King, CEO of the King Center where you can learn more about Dr. King and his wife Coretta Scott King who founded the center.

"Environmental injustice is a tangible, intolerable example of an exhibited moral laxity and minimal concern for healthy standards by corporations and political structures  based on the race, ethnicity, and class of those being impacted."

Whatever you do today to celebrate Dr. Martin Luther King’s legacy, we encourage you to join us and his family in keeping his dream alive. Let us all hope and actively work for a day when all people – regardless of the color of their skin or economic status, have equal rights with access to clean water.

"So even though we face the difficulties of today and tomorrow, I still have a dream. It is a dream deeply rooted in the American dream. I have a dream that one day this nation will rise up and live out the true meaning of its creed: We hold these truths to be self-evident, that all men are created equal."

There are an estimated 6-10 million lead service lines in the country, with the majority of them being located in environmental justice and low-income communities. Source

Water quality permits (NPDES permits) are severely backlogged and expired, contributing to perpetuation of water pollution across the country. Source

Superfund sites are consistently located in environmental justice communities and continue to be proposed in these areas. Source