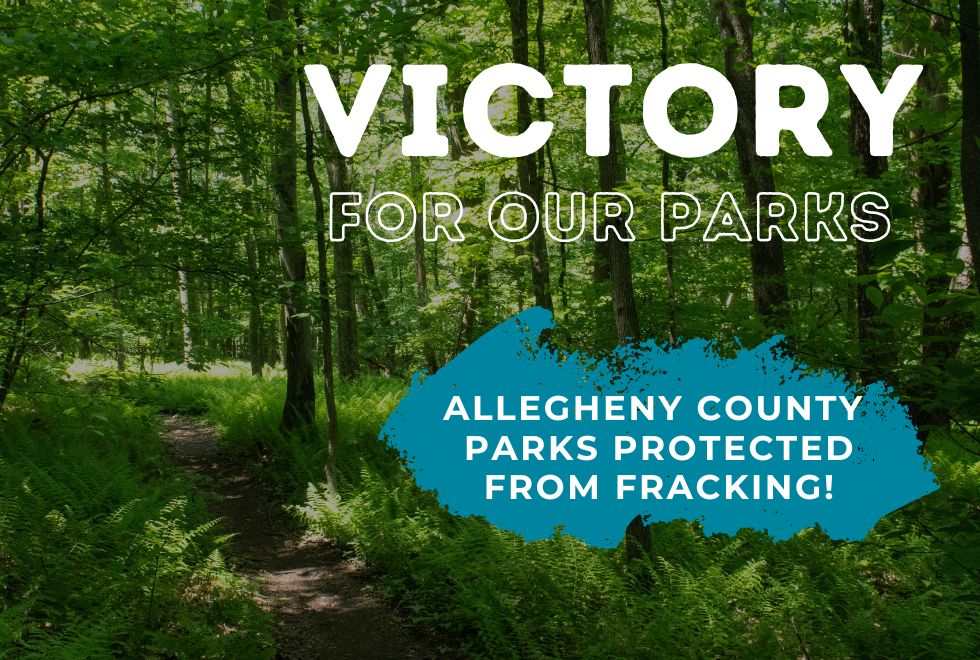 Regardless of where you live, you no doubt feel the same way I do: our parks are a treasure and an invaluable resource. No one who hikes, bikes, walks, bird watches, plays in, or otherwise uses a community park wants to see them degraded by fracking or other industrial uses. In fact, the very concept of our parks system is a testament to that belief and the desire to preserve the natural beauty of certain areas so that it can be enjoyed by everyone and to use wise conservation practices in the development of roads, playgrounds and other recreational infrastructure.

Industry does not fit in.

Yet in 2014 Allegheny County Executive Rich Fitzgerald and a majority of the 15-member Allegheny County Council announced that they had approved an agreement with Range Resources and Huntley & Huntley to drill for natural gas beneath county-owned Deer Lakes Park. The lease prohibited drilling operations on the park’s land. Instead, horizontal wells stretched from three well pads on private property and extended beneath the land under the park. In the years that followed, county leadership touted the economic benefits the deal brought Allegheny County and propped it up as an example that fracking could be done safely.

A study published by Duquesne University however painted a much different picture.

Reality was very different from what our elected officials would have us believe. Fracking was in fact devastating for Deer Lakes Park’s three man-made lakes and four waterways that eventually flow into the Allegheny River from the park. As noted in the study: “Drilling commenced in early 2016, and there are now five producing wells… An independent water quality study was undertaken beginning in July 2015. Samples from seven different sites in the park were used to establish a water quality baseline prior to the drilling. Monthly sampling continued through August 2017, with analytical parameters including conductivity, pH, dissolved oxygen, anions, light hydrocarbons, and a suite of metals and metalloids. Detection of light hydrocarbons, surfactants, and other constituents in specific mass ratios suggest that water quality has been impacted by a combination of past and present extractive activities.”

But these findings shouldn’t have come as a surprise. If county leaders had just delayed their decision, they would have benefited from the Pennsylvania Department of Conservation and National Resources’ 2014 monitoring report which  looked at the impact of similar activities on our state parks. These findings only served to reinforce public concerns that even when fracking and industrial operations take place just outside park borders, their non-surface activities and proximity can still put our parks in harm’s way because these operations result in noise and light disturbance from heavy machinery, construction of new roads, increased truck traffic and other activities- all of which have the potential to significantly affect the natural wildlife and ecological integrity of our park systems. And these are just the minor impacts.

The study also proved that fracking has a very high potential for spills, groundwater contamination, and air pollution and is thus by its very nature a potential to contaminate our parks when it occurs nearby.

Over the last 7 ½ years Allegheny County evolved. New members who are environmental champions were elected to council like Anita Prizio, Bethany Hallam, Michelle Naccarati Chapkis,  and Liv Bennett- all of whom we endorsed. Perspectives about fracking have also changed as companies racked up thousands of violations  across Pennsylvania and tackling climate change by transitioning away from fossil fuels and toward clean renewable energy sources has grown as a priority.

So when the new County Council leadership heard whispers of a possible well site on or near another county park their approach to the situation was drastically different and demonstrated lessons learned. The result was to introduce an Ordinance (12162-22) that would ban new fracking and other industrial uses in all Allegheny County parks.

This not only screamed organizing opportunity to us but we knew it was something  the residents of Allegheny County would overwhelmingly support because their sentiment had also overwhelmingly shifted toward seeing fracking as something which does not belong in our parks.

So, we went about communicating with members about weighing in with their councilmembers, offering public statements of support during various stages of the legislative process and doing behind the scenes direct lobbying with targeted members of Allegheny County Council. This whirlwind of activity resulted in an 11-4 vote in favor of the ordinance! We were elated! We had gone into this trying to get 9 votes in favor and picked up an extra 2 along the way!

However, this victory for our environment and parks was in jeopardy of being short lived when Allegheny County Executive Fitzgerald immediately declared that he would veto it. The rationale the County Executive offered in his press statement was that the bill didn’t do what its authors think it does because any future legislation could simply repeal this one and that he didn’t want to tie the hands of future administrators and would not let council do so either. This was a completely misguided reasoning that undermines the very nature of our governmental structure. Under this philosophical approach, he was essentially saying that Allegheny County Council’s actions in general are futile and it would be pointless for this body to attempt to tackle any significant issue facing the county.

We disagreed with this wholeheartedly and believed, rightly so, that the political climate included  a collection of county officials that valued conservation and our environment sitting alongside those who listened throughout the process to the outpouring of support from residents for greater protections for our parks. During the entire public comment process, only the industry directly spoke out against the ordinance - every single other public comment supported it. Such a dynamic was something we had to capitalize on. But holding onto the at least 10 votes needed to overturn the veto wouldn’t be easy since the County Executive was now applying pressure on councilmembers.

So we ramped back up our outreach and mobilization efforts. We repeated much of what we had done in the weeks prior as we waited for a special session of Council in which they would vote on the veto. We added in a texting campaign targeting the two members who had voted yes on the ordinance but who we suspected might side with the County Executive. As a result, we were able to ultimately override the County Executive’s veto, the first time that had occurred during his 11 1/2 years in office. In fact, the pressure we applied was so impactful that we actually ended up picking up an additional vote on the veto override from where the vote count was for initial passage. The final vote was 12-3! Incredible!

Now this is what I call a real example of what can happen when we come together and utilize people power for the betterment of our communities and environment! This was a big win for Clean Water Action and an even bigger win for the people and the parks in Allegheny County. Thank you to everyone who took action with us.