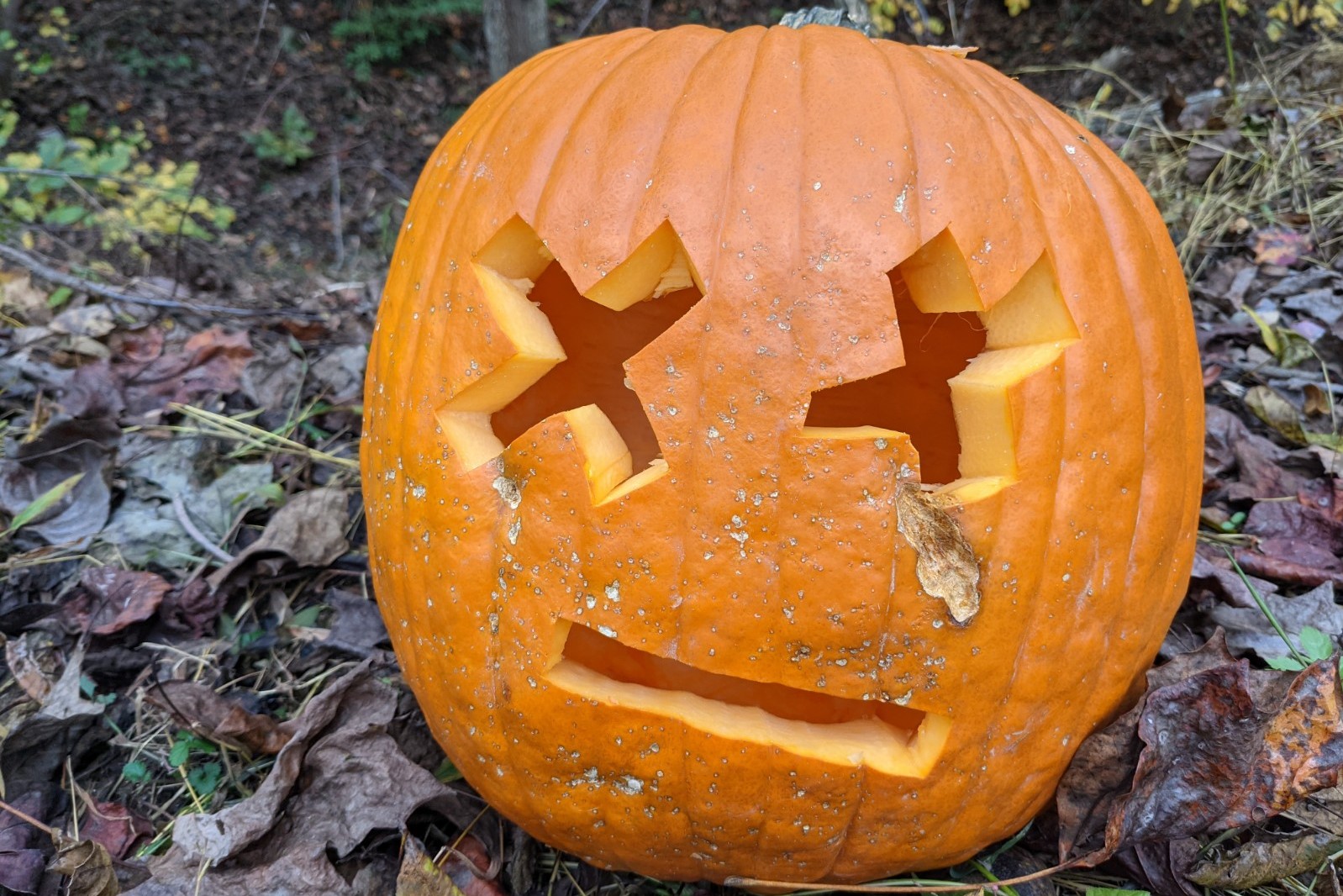 How to Get Rid of a Dead (Pumpkin!) Body

As Halloween creeps closer, jack-o-lanterns haunt windows and gourds replace the usual dinner table centerpiece. You have probably already noticed that pumpkins are an autumn aesthetic staple. However, their menacing carved faces are not the scariest things about them. Even though pumpkins die out of style at the end of the season, they scan still haunt the environment and public health from beyond the grave.

Although pumpkins can be found in a variety of products—from seasonal frappuccinos to cat food—most of the pumpkins grown in the United States are used for fun fall activities and décor. The US Department of Energy estimated that 1.3 billion of the almost 2 billion pounds of pumpkins that were grown in 2014 were trashed. This is a serious, wasteful problem: pumpkins require a lot of water and energy to grow, yet most of them never get eaten. Further, once pumpkins end up the landfill, their rotting flesh release methane, a significant greenhouse gas that is 25 times stronger than carbon dioxide. Clearly, these landfills are not their ideal gravesites.

Farming pumpkins also has its curses as well. Gourds are prone to diseases and infections; as a result, farmers tend to apply large doses of pesticides and fungicides on their patches, which are harmful to humans and wildlife when they contaminate the environment. Furthermore, farmers use fertilizers, which not only promote pumpkins to expand to frightening sizes, but also cause algal blooms that are toxic to both humans and wildlife when washed into waterways.

Sustainable Pumpkin Acquisition and Use

While it might be too late for Halloween, you can still mindfully choose pumpkins for your Thanksgiving decorations to minimize your environmental impact this fall.

First of all, the entire pumpkin is edible, including the stem, so there is a lot you can do to minimize food waste. Typically, pumpkins sold for decorative uses are bred for size, shape, and carving practicality, not taste. Choosing a variety that has been bred for flavor—such as jack-be-little, Jarrahdale, sugar pie, Hubbard or kabocha—can make eating the whole gourd less intimidating and more delicious. In addition to making classic fall dishes like pumpkin pie or pumpkin soup with the fruit’s flesh, you can toast its seeds to make a potassium and protein-rich snack or salad topping. Before rushing to the grocery store for your ingredients, try finding local and/or organic pumpkin farmers. After all, when more resources are used on growing and transporting a pumpkin, the impact more greatly affects the environment.

After Halloween night, carved pumpkins often look more like hideous zombies than festive jack-o-lanterns. Obviously, you cannot eat them once they have started decaying. Luckily, you can get rid of these rotting corpses easily from home. Pumpkins are 90% water, so they can simply be buried in your yard or added to your compost pile to decompose. You can also turn an old pumpkin into a feeder or cut it up and leave it outside for wildlife. Birds, foxes, deer, and other creatures will enjoy eating the fruit’s flesh and seeds. However, do not leave pumpkins out if dangerous animals or pests are common in your area; these creatures, such as bears or rats, will also be attracted to the free snacks.

Living in an apartment in the middle of Baltimore, I understand that sustainable pumpkin disposal at home is not an option for many people in Maryland. Fortunately, there are many locations across the state that offer a sustainable graveyard for our jack-o-lanterns.