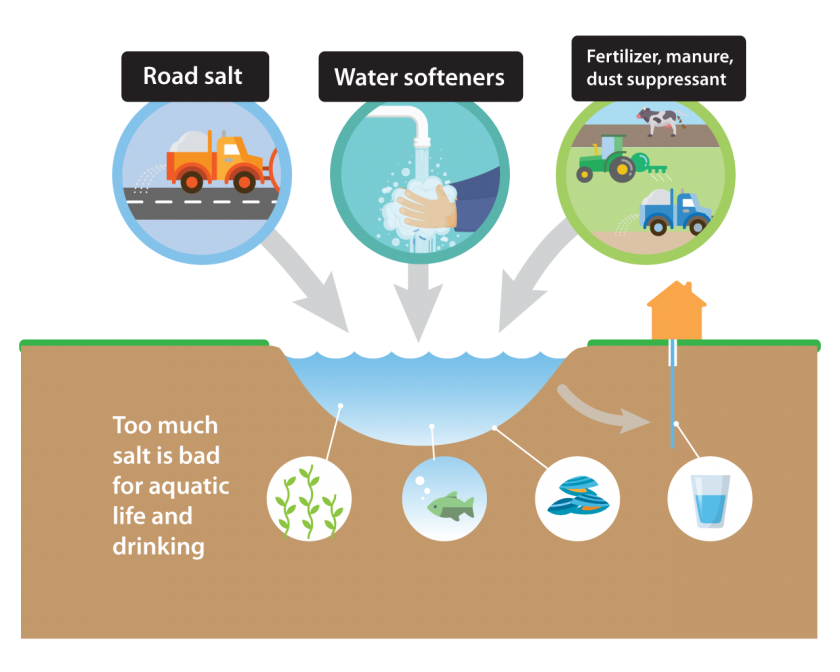 How Salt Gets in the Environment

We usually associate saltwater with the ocean, which gets its distinctive flavor from naturally occurring minerals. Such minerals are also found in freshwater systems in lower concentrations, and natural salt levels vary with local geology. However, human inputs of salt increase concentrations far beyond naturally occurring levels, threatening ecosystem balance. Therefore, it is important to understand how humans cause salt pollution. In this section, we will reveal the human activities responsible for salt pollution and the extent of their impacts.

While salt can enter the environment through many different activities, road salt usage is the most significant contributor to salt pollution. It is estimated that 90% of salt pollutions in watersheds comes from road salt, with more than 18 million metric tons applied annually in the United States (Pieper et al. 14078). Once applied, much of this road salt will enter nearby rivers, streams, and aquifers (Pieper et al. 14078). Typically, only 45-59% of road salt entering waterways will be transported out, leaving the rest to accumulate in the environment.

As road salt is such a significant contributor to salt pollution, urban and suburban areas with many roadways are most impacted. In fact, “hotspots” of road salt in groundwater can be associated with “long-term and improper salt storage, frequent salting on steep or heavily used sections of roads, or high density of narrow roads which are too small for modern, efficient, salt trucks” (Kelly et al. 7).

Although the largest contributor, road salt is not alone. Use of water softeners and sewage discharge each contribute to about 3% of salt pollution. Calcium applied to soil and saltwater infiltration in over-pumped aquifers exacerbate this problem.