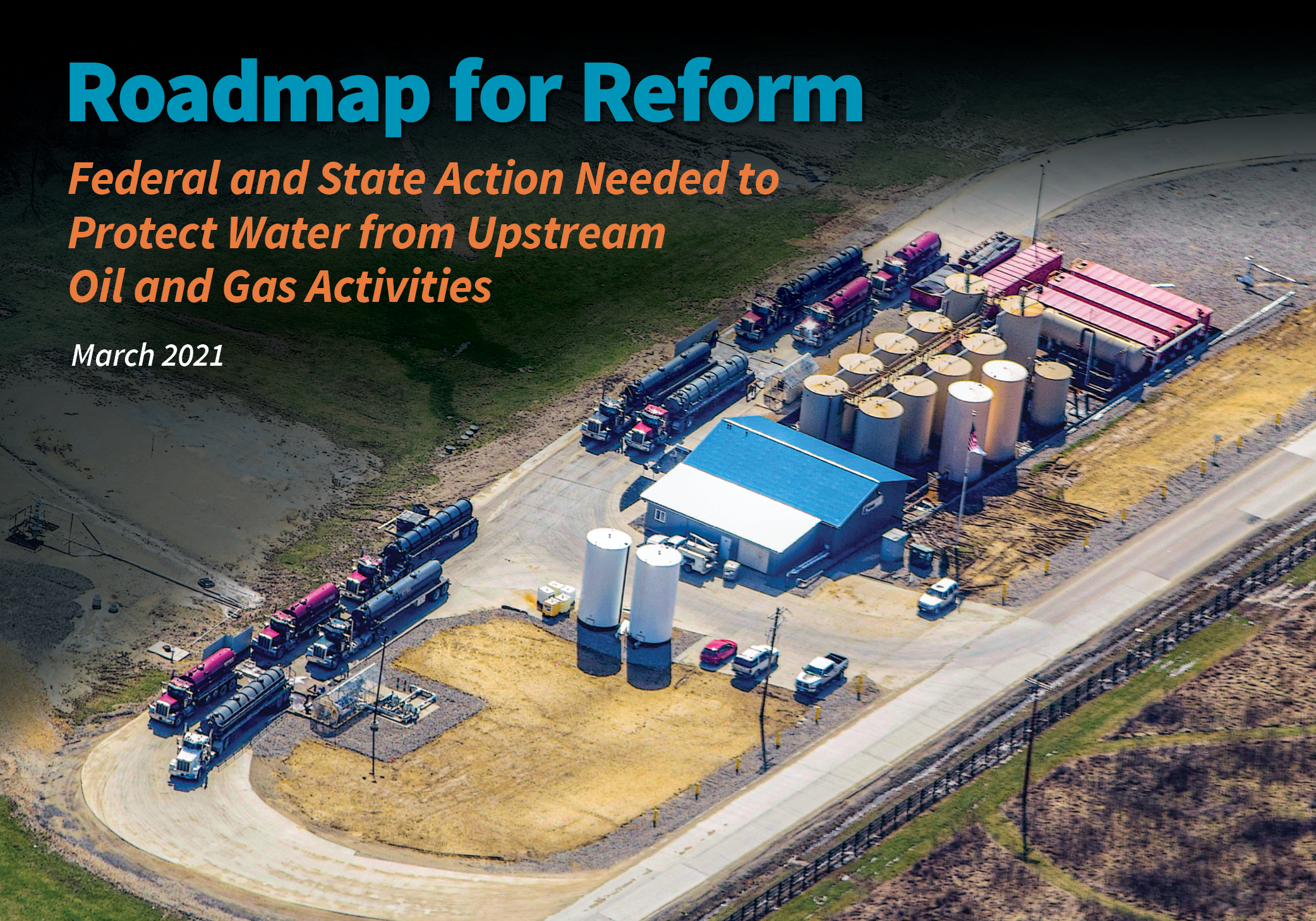 The oil and gas industry wields enormous political power. Massive spending on elections and lobbying, a relentless spin machine and agency capture at all levels of government have given fossil fuel companies outsized influence on our political, legislative and regulatory processes. The oil and gas industry has parlayed that power into loopholes, exemptions, and special treatment in nearly all of our federal environmental protection laws, the tax code and even Covid relief legislation. This means that we pay with risk to our health and environment when the industry profits.

Clean Water Action is out with a new report about how the Biden Administration and states can close the loopholes and exemptions and fix the industry-influenced weak spots in Clean Water Act and Safe Drinking Water Act programs to better protect water quality from oil and gas production activities. The “Roadmap for Reform” builds on more than a decade of work investigating and exposing how oil and gas activities threaten water and advocating for better protections.

The Clean Water Act set the goal of eliminating pollution in our rivers, lakes and streams. But the fossil fuel industry has ensured weak regulations in the effluent limitation guidelines (ELG) program, which amount to loopholes that enable oil and gas producers to discharge pollutants directly and indirectly into those water bodies. EPA has tools at its disposal to stop this, and needs to use them.

The Safe Drinking Water Act (SDWA) Underground Injection Control (UIC) Class II program regulates the injection of fluids for oil and gas production and wastewater disposal and is meant to protect underground sources of drinking water (USDWs) from injection activity. This program has failed to keep up with changes in the oil and gas industry over the four decades since its inception and prioritizes fossil fuel development over actual drinking water protection.

We can achieve the Clean Water Act’s goal of eliminating pollution in our rivers, lakes and streams, and the Safe Drinking Water Act’s mandate to fully protect underground sources of drinking water. But to get there, we need EPA to get to work ending the preferential treatment that oil and gas companies have enjoyed for decades.

As a first step, Congress needs to finally pass the “Frack Pack” - a package of five bills that would close some of the exemptions for oil and gas in a number of federal laws, including the Halliburton Loophole which exempts hydraulic fracturing from the UIC program, and an exemption from stormwater rules under the Clean Water Act. But we can’t stop there. The existing regulatory programs in our water laws are still riddled with loopholes that go beyond what’s addressed in the Frack Pack.

Here are five of the oil and gas industry’s favorite water loopholes and how we can fix them:

Loophole #1: The Safe Drinking Water Act’s Underground Injection Control program allows EPA to exempt aquifers from protection as a potential source of drinking water. But the criteria for doing so are decades old, and exemptions have been rubber stamped without adequate oversight - handing over valuable groundwater resources to the oil and gas industry to use as their dumping grounds.

Solution: EPA should stop writing off our groundwater to allow for fossil fuel development and update the criteria for - or stop issuing aquifer exemptions.

Solution: EPA should revise the ELG regulations to close the loopholes that allow for discharge of produced water in the arid west for agricultural uses, from low producing wells, and from coalbed methane production.

Loophole #3: Sewage treatment plants (POTWs) and centralized waste treatment (CWT) facilities are allowed to accept produced water despite not being designed for processing this wastestream and its unique chemical components.

Solution: EPA should update the regulation of POTWs to prohibit them from accepting conventional oil and gas wastewater. Unconventional wastewater (from fracked wells) is already prohibited, despite containing the same or similar chemical characteristics. EPA should also update the regulation of CWTs to prohibit accepting produced water when it lacks the necessary chemical information and treatment standards to ensure proper treatment and safety.

Loophole #4: EPA lacks analytical methods and toxicity information for the majority of chemicals found in produced water. This means that EPA and states don’t have the scientific tools to regulate oil and gas wastewater discharges even if they wanted to.

Solution: EPA should work to fill these data gaps and improve its scientific understanding of produced water chemicals.

Loophole #5: Most regulation of oil and gas activities is implemented by state agencies, which are often under-resourced, captured by industry, or just not up to the task of overseeing oil and gas operations.

Solution: EPA needs to step up its oversight of state UIC and Clean Water Act programs by improving program reviews, and investigating MOAs to make sure they are properly enforcing the law and regulations. Congress should increase funding for EPA and states, and get rid of SDWA Sec 1425, which gives states an alternate pathway for obtaining UIC Class II primacy.