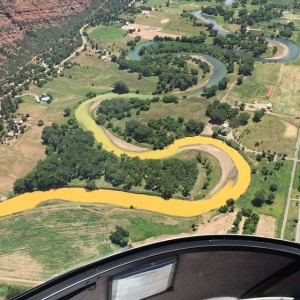 Last week, the Hardrock Mining and Reclamation Act of 2015 was introduced in the Senate to help ensure that taxpayers aren’t on the hook for cleaning up contaminated abandoned mines by requiring mining companies to pay royalties for extracting mineral on public lands.

In August 2015, there was a three million gallon spill of mine waste water contaminated with heavy metals at Gold King Mine. The spill was a result of efforts by contractors to contain the toxic chemicals in the closed mine. This spill has received a great deal of attention, recalling other serious pollution events related to mining in the Colorado Mountains.

The initial reaction was to blame the EPA for this water quality disaster, engendering local and national hearings and threats against the EPA. We have to wonder why there was not such furor with the recent pollution events in Clear Creek, the Arkansas, or the Animas, which were every bit as ugly as the Gold King event?

Colorado has a long history of polluted mine-water blowouts, with scores more just waiting to happen. There is plenty of blame to go around, from the mine operators who benefited from Colorado’s low severance tax, our lax regulatory system (which, since the 1800’s, has encouraged all manner of prospectors, ruffians included), and local governments that refused Superfund designation of polluted sites for fear of losing tourism.

The EPA has done maintenance and clean-up on many sites. In this instance, they were the inadvertent trigger for the Gold King blowout, for which they have taken full responsibility. But it is time that we faced up to the immense clean-up needed on other sites.

There are hundreds of these highly polluted mining sites; time-bombs which are presently leaking, killing aquatic life and degrading streams, and which are liable to blow out at any time. We need to try to find the responsible mine owners, insisting they clean up their mess. We need to demand a surety bond from new mining operations. Then, with Superfund assistance, we need to prioritize and treat all the other polluted mine shafts so that we do not have more poisoning of our rivers.

Our local, state, and federal government have responsibilities that are being shirked. The time is ripe for our citizens, agencies, and elected officials to join with the EPA in addressing the situation. We note with gratitude that this event seems to have opened a serious conversation about mining impacts in the West, with discussions of legislative changes to begin to address several aspects of the problem.