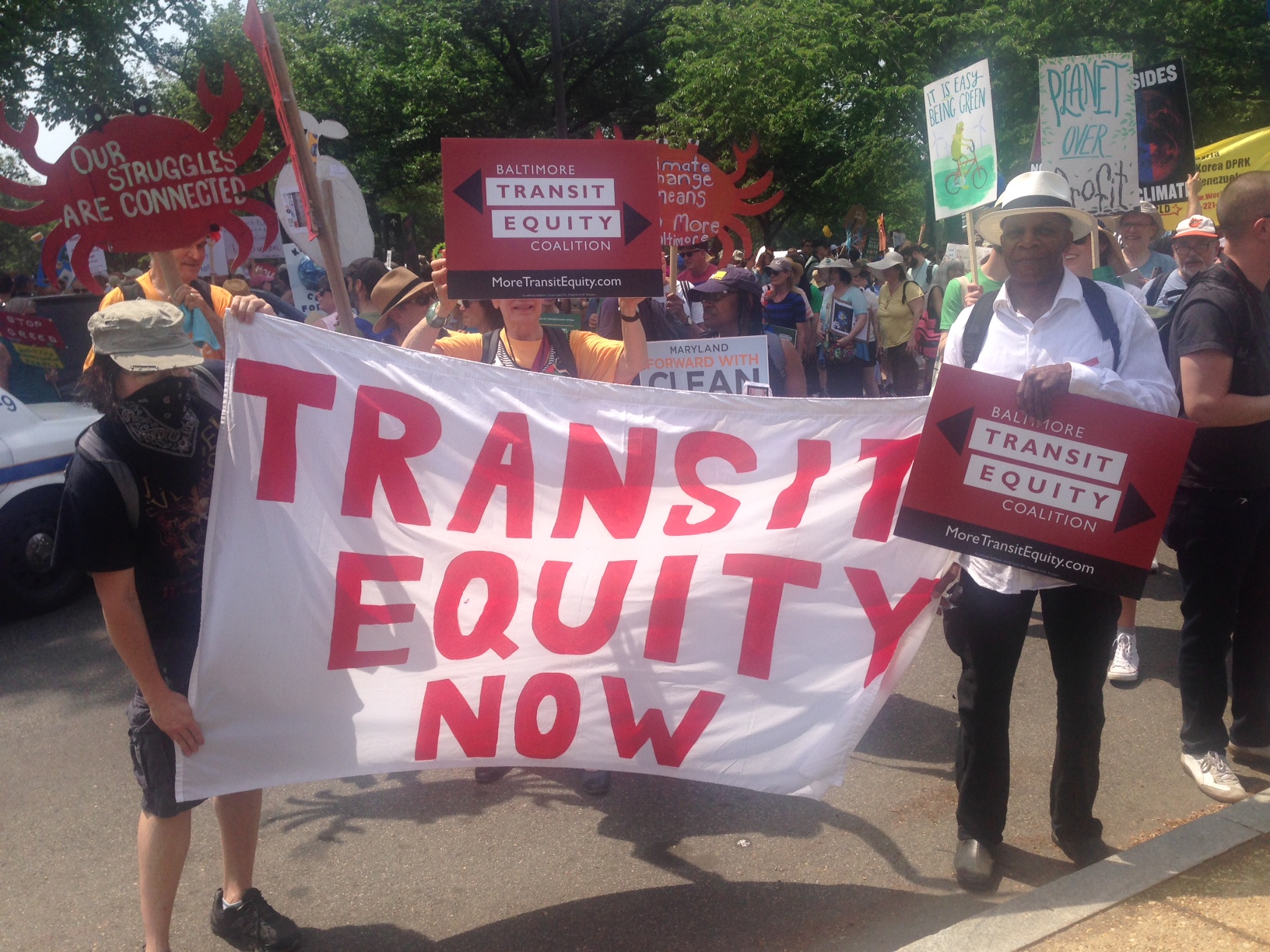 Public transportation systems are a key air quality and climate change issue.  About a third of Maryland's total greenhouse gas emissions come from the transportation sector.  Public transportation uses at least half as much energy to move a single person as a private vehicle, and one study found that replacing private vehicle trips with public transit trips reduces carbon monoxide by 95%, volatile organic compounds by 90%, and carbon dioxide and nitrogen oxide by 45%.  Robust public transit systems allow commuters and travelers to get out of their cars, reduce demand for parking, help cities build denser housing, and give everyone cleaner air and water.

Public transtportation systems are also a key equity issue.  In Baltimore City, with its history of segregated housing policy, redlining, and disinvestment in black neighborhoods, many black and low-income residents lack access to a car and rely on public transit to get to work.  Two-thirds of transit-dependent people in Baltimore face commutes of 90 minutes or more - each way.  Bus service in Baltimore is notoriously unreliable, and often prevents transit-dependent people from getting where they want to go or arriving at work on time. Commuting time is one of the strongest factors in a person's chances of escaping poverty: the longer the commute, the harder it is to maintain a job, keep stable housing, and accumulate wealth.

If it had been constructed, the Red Line would have improved public transit across the city, provided crucial east-west connectivity, and gotten more cars and even buses off the road in neighborhoods with high rates of air pollution.  Governor Hogan's decision to cancel the project and reallocate its funds to rural highway projects took away the potential to create thousands of jobs, connect residents with job centers, and make Baltimore a more just, equitable, and economically competitive city - and the new BaltimoreLink bus system is a poor bandaid for that loss.  We're working with the Baltimore Transit Equity Coalition to demand transit equity for Baltimore and a resurrection for the Red Line, and just sent a letter to MTA demanding answers about this decision's impact on air quality and climate change.  Read it below, and we'll keep you updated on MDOT's response and further actions we can take for transit equity in Baltimore.

Re: Emission Sources Related to the BaltimoreLink

Transportation is a major source of greenhouse gases and air pollution. According to a 2016 report from the Maryland Department of the Environment, 36% of the total greenhouse gases produced in Maryland come from transportation. In addition to greenhouse gases, diesel-powered vehicles emit nitrogen oxides and particulate matter, which can contribute to respiratory and cardiovascular illnesses and premature death. Maryland has a goal to reduce greenhouse gases by 40% by 2030, and a key component of the plan is mass transit expansion.

A fleet built on diesel technology is harmful to human health.

We have concerns that the new buses purchased to increase the size of the fleet are not hybrids, but instead are diesel vehicles whose emissions are known to be particularly harmful to human health. These new buses will further increase noxious exhaust gases and particulate emissions for pedestrians, cyclists, transit riders, drivers, and residents on every bus route, as well as increase the bus system’s emission of greenhouse gases. This is disappointing when hybrid technology is proven to reduce not only greenhouse gases but also other gases and particulate matter that are linked to cardiovascular disease, cancer, and asthma. In addition to these problems, the braking system of the MTA buses is known to throw off particulates that can be aspirated by people on the street and are dangerous to their health.

BaltimoreLink is designed to increase the frequency and concentration of diesel buses in the downtown core, which will have the effect of concentrating emissions in the area with the most pedestrians and cyclists on the streets and the least dispersion of air through wind, leading to worse local air quality for thousands of Baltimore residents and workers. This is especially concerning when we compare the BaltimoreLink to the Red Line Light Rail Project (Red Line), which would have been electric and therefore would have reduced air pollution - in East Baltimore, West Baltimore, and the downtown core.

Equitable transit access, a provision of the Red Line, would have ensured workers’ access to continued employment; however, BaltimoreLink, in its current form, is not equitable for thousands of workers with no access to a private vehicle.

Additionally, a major feature of the Red Line was how it addressed transit inequity in Baltimore City, providing East-West connectivity and increasing access to existing job centers in the city and suburbs. Over 30% of the population in Baltimore has no access to a private vehicle; a reliable, predictable, equitable transit system is critical to ensure continued employment.

1. How has the BaltimoreLink helped Maryland meet its 40% by 2030 greenhouse gas reduction goal set in the Greenhouse Gas Reduction Act; and what GHG emission and other pollutant reductions were projected from the alternative proposals, such as the Red Line or non-diesel buses?

2. What kinds of, if any, air pollution modeling and analysis was conducted in relation to the development of the BaltimoreLink? If modeling did occur, are those results publicly available and how may the public access the data?

3. What type of particulate emissions do the new buses release from their diesel combustion engines? And what are the known particulates that get produced whenever the bus is braking?

4. How has the roll out of the BaltimoreLink improved transit access in communities of color and low-income areas? For senior citizens and persons with disabilities? Students? Please be specific as to the metrics used to measure such outcomes.

5. How has connectivity improved to move Baltimore residents to rising job centers, such as Sparrows Point? Have commute times decreased? Are more workers able to reliably reach employment? Again, is MTA measuring this outcome, and how?

6. Why was an Origins and Destinations study not conducted prior to the rollout or planning of the BaltimoreLink? And if, as the MTA has claimed, the anecdotal reporting and surveys conducted with some riders were a sufficient substitute, when will these reports, their methodologies, and their results be made available to the public?

Public transportation is the especially important daily lifeline for thousands of residents and workers in Baltimore City because it improves access to jobs, opportunity, and healthcare. This system’s major role can achieve a reductive impact on our carbon footprint, nitrogen oxides, and particulate matter emissions via the decrease in number of personal vehicle miles traveled daily.

We thank you for considering our questions.