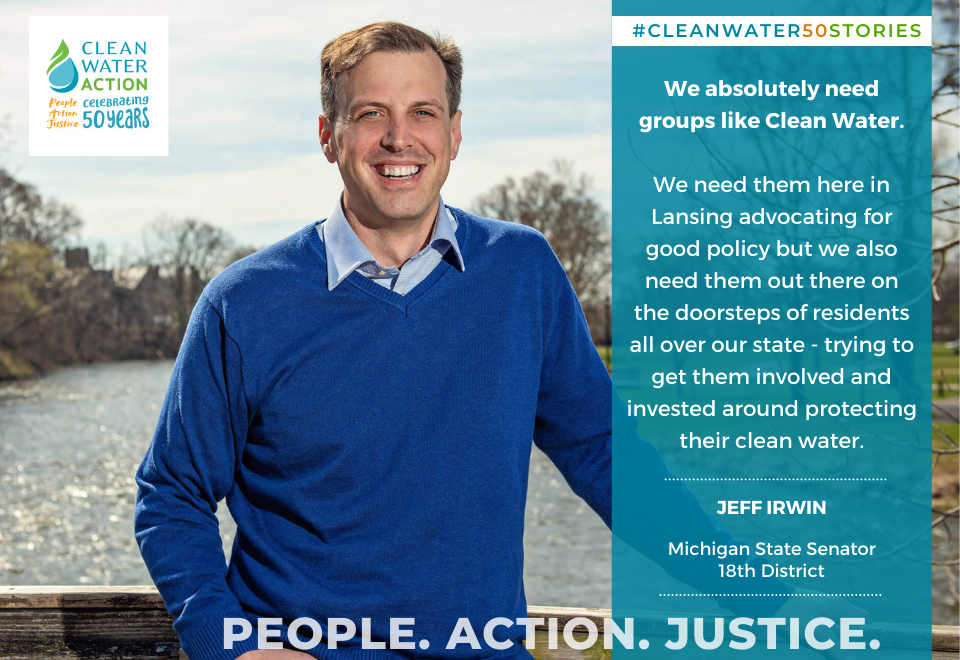 To celebrate Clean Water Action's 50th anniversary, we’re sharing our history and journey with the people who have joined us along the way as we worked to protect clean water through #CleanWater50Stories. Michigan Senator Jeff Irwin has long been a champion on the issues that affect water resources in Michigan and the Great Lakes. In his time in the Michigan State House Senator Irwin received Clean Water Action’s Lawmaker of the Year Award and has continued to be a strong environmental advocate in the state Senate. Clean Water Action is grateful to Senator Irwin for his leadership and partnership throughout the years, as well as taking the time to record these thoughts to share in honor of our 50th year:

During those years as an activist, fighting for clean water and clean air policy here in Michigan, advocating in Lansing, I was showing up at Town Hall meetings, doing press events, we could always count on Clean Water Action as a great partner. And so when I started moving into elected office, I was just very fortunate to be able to count Clean Water as a partner in the fight for a better Michigan.

My favorite Clean Water Action story probably goes back to those days, when we were fighting for increases to the permit fees that water polluters pay, NPDES permits, and that was a big effort. All of the environmental community was arranged together, and at the front of the pack was Clean Water Action with their activists, with their volunteers, with their giant bags of letters that they had gathered at people's doorsteps. I'll just never forget delivering those messages from Michigan citizens, messages that were collected at doorsteps all over the state of Michigan, to Governor Granholm and the success we were able to have in increasing those fees, which meant that water pollution would be inspected more. That the top polluters in our state, someone would go over to that pipe once in a while and test that effluent to make sure that it was – you know – what they said it was.

That was a memory that really stands out to me and it really brings me back to some of the Clean Water Action leaders who I had a chance to work with back in those days. People like [former Clean Water Action Michigan State Director] Cyndi Roper, who is still very involved in Michigan politics. People like [recently retired Clean Water Action National Managing Director] Kathy Aterno, who was an amazing leader in Macomb County. People that really kind of built the base of that binding team in many ways, that for years and years were doing just great work in Macomb county connecting people to Lake St. Clair and connecting them to the decisions in Lansing that affect the quality of places like St. Clair.

One of the other questions was why do I care about clean water? Well, I'm mostly water, I think that's a good place to start. But not only am I mostly water, but Michigan really is mostly water. We were defined by the water, we are right in the heart of the Great Lakes, one of the most amazing hydrologic systems in the entire world. And it is a tremendous benefit, tremendous joy to be able to live amongst this abundance and I think it's especially important that we step forward to protect this water. Not just because we love it, not just because it is important to our lives, not just because it is important to our health, it's important to our recreation, but it's going to be important to future generations. It's going to be important to people who have never even come to Michigan or people who have never even been born yet, people that none of us who are listening to this video may ever meet because it could be generations later. And we need to be thinking about all of those people.

I know that I am a member of the Sault Tribe of Chippewa Indians and Sault Ste. Marie Tribe of Chippewa Indians and one of the teachings is to think about seven generations forward and seven generations back. What would the ancestors be thinking, how would they be looking upon what we're doing? What can we do to serve those generations that will come after us? And so keeping clean water, protecting clean water, and maintaining our Great Lakes are the things that just come to mind immediately when you think about what we can do to serve those that are coming after us.

What's the future of Clean Water? Well, I hope it is bright because we absolutely need groups like Clean Water. We need them here in Lansing advocating for good policy, but we also need them out there on the doorsteps of residents all over our state, explaining to them what's at stake, explaining to them what might be an emergent issue in their community and trying to get them involved and invested around their water and around protecting their clean water. And we're never going to be able to do that if folks don't have the kind of public education and organizing that groups like Clean Water deliver.