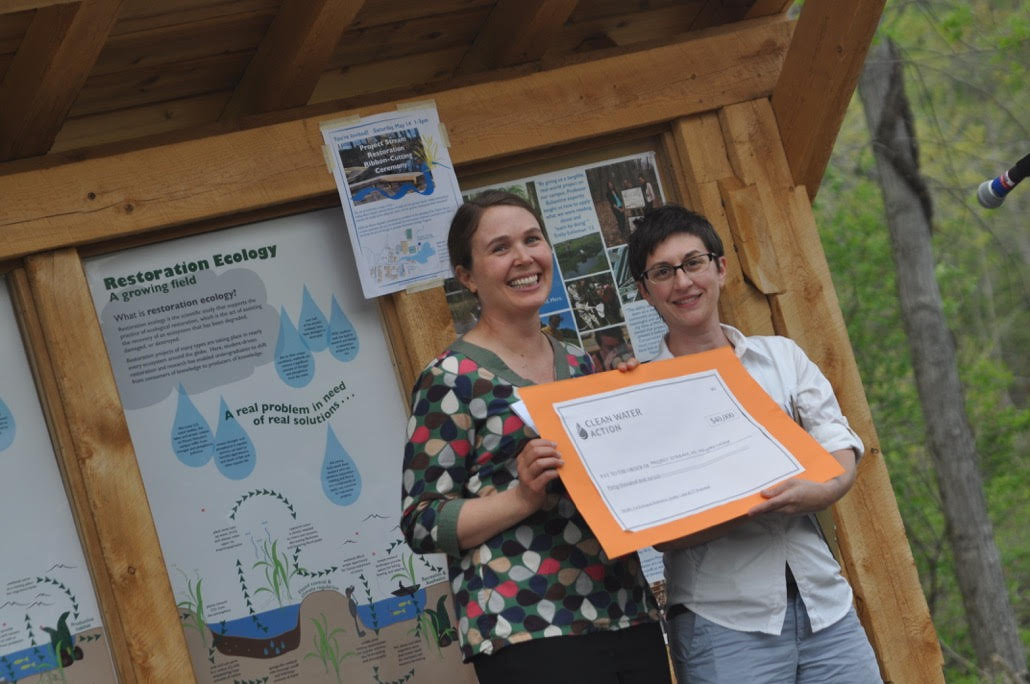 Across Massachusetts, stormwater runoff and discharges from stormwater drain pipes are the largest contributors to water quality problems in our rivers, streams, and marine waters. Clean Water Action Massachusetts is among the leaders in using Clean Water Act citizen-suit enforcement actions to compel polluters to “clean up their act.” Clean Water’s Citizen Suits are resolved frequently through settlements which cause clean-up on the industrial sites and include a payment known as “supplemental environmental project” (SEP) from the company to an organization working in the impacted watershed. From 2005 to 2014, Clean Water Action has directed over $600,000 in SEP funds to seventeen groups across Massachusetts to fund water quality improvements.

Read on for stories of how our work to #ProtectCleanWater is making a difference across the Commonwealth: Westport, Worcester, Canton, Williamstown, North Adams, Weston.

The Westport River watershed is home to one of the most important shellfish fisheries in Massachusetts. The Buzzards Bay estuary, which includes the Westport River watershed, boasts a $4 million annual shellfish industry, representing 25% of Massachusetts’ total fish output. Species include soft-shell clams, quahogs, scallops, oysters, and lobster. However, today 23% of the shellfish beds in the Westport River are permanently closed due to bacterial contamination. Limited tidal flushing in the upper reaches of the river is a significant factor in the contamination. In addition, the riversuffers from nitrogen pollution, causing summer algae blooms and loss of critical eelgrass.

The Blackstone River Valley, which stretches from Worcester, MA to Pawtucket, RI, was the site of the nation’s first cotton mill in 1790 in Pawtucket and the cradle of the industrial revolution However, this legacy has carried a heavy price in industrial pollution. In the nineteenth century, as textile factories multiplied across Massachusetts and Rhode Island, virtually every mile of the river was damned with waterpower mills powering factories. Today, the river has made remarkable strides. In 1970, only two fish—carp and white sucker—could survive. Now the Blackstone boasts 19 fish species in the main stem and 37 throughout the watershed, attracting fishing and boating enthusiasts.  Current challenges include many sections of the river still do not meet basic EPA water quality standards due to extreme levels of nitrogen and phosphorous.

Diminishing groundwater levels is a central issue facing the Neponset River watershed. With  heavy sprawl common in suburban towns in the watershed like Canton, Dedham, and Milton, comes an increasing amount of driveways, roads, and parking lots with impervious surfaces. As stormwater flows over pavement, a polluted cocktail of pesticides, fertilizer, animal waste, and road debris forms that is not absorbed into the ground, where the pollutants would be naturally removed and the groundwater recharged. Instead, the polluted stormwater is discharged like a flash flood through stormwater drains into the Neponset, with overflow ultimately flowing into Boston Harbor.

Rivers and streams were meant to be natural superhighways, enabling migrating fish to freely travel from cycles of spawning to feeding to reproduction. However, across the Hoosic River watershed, dams and poorly designed road crossings (culverts) create dead-ends that block the river’s flow, causing water temperature to rise and oxygen to decline. As a result, the key conditions that the Hoosic’s cold-water fish like brown trout and brook trout need to thrive – rapidly flowing cold, oxygenated water – are degraded.

Among the goals of the Hoosic River Watershed Association is restoring the river’s natural flow. HRWA conducted a study to look at the effect of a dam removal in Cheshire, MA on the Hoosic River’s habitat and biodiversity. The study focused on macroinvertabrate insects, such as caddisfly, damselfly and stonefly, which fish feed on. Macroinvertabrate studies are important because the structure of the macroinvertabrate community in a water body indicates water quality. Like fish, the habitat for macroinvertabrates include submerged rocks and sediments in stream beds and decomposing organic manner like logs, leafs, and sticks. Overall, the study found that following the dam removal, the macroinvertebrate community that had been blocked by the dam saw improved biodiversity, similar to that located below the dam. The surveyed stations along the brook also showed a healthier insect community after dam removal.  Additional studies are underway in 2014, supported by funding from the Massachusetts Division of Ecological Resources.

In many cities, rivers are a great urban asset – a recreational resource for fishing and boating; a gateway that draws resident and visitors, connecting them to the river’s historic and cultural ties to the city. In North Adams’ downtown, the Hoosic River serves the opposite purpose. Twenty-feet high concrete chutes built in the 1950s for flood protection line the river, ringed by chain link fence. The result is a forbidding ribbon of concrete running through the city that disconnects people from the river and furthers the perception of downtown blight.

Hoosic River Revival aims to alter this picture radically , reconnecting the river back to the people and revitalize the community. It’s an ambitious project with the potential to tackle many of the great issues that stress urban water ecosystems today. The idea is to restore an urban waterway, building connections between people and places through trails, bike paths, community gardens, and artists’ studios. In doing so,  the river becomes a destination point, serving as an economic catalyst for North Adams, which has suffered economically for decades like many former Massachusetts mill towns. HRR, a community-based nonprofit group leading the restoration project, is currently developing a $10 million pilot demonstration project that will provide a better understanding of the project’s feasibility from an economic, engineering, and ecological standpoint.

The Charles River is suffering significant damage from phosphorous and nitrogen nutrient pollution, which leads to the growth of toxic blue-green algae. In large quantities, the bacteria produces a toxin that is harmful to humans and other mammals, especially dogs. In the Charles River, severe blue-green algae blooms are typically caused by heavy rainstorms that flush nutrient-laden stormwater into the river and warm the water temperature, which create the perfect condition for the toxic blooms.