In response to President Trump’s recent announcement that the U.S. will be the first of the 195 countries to pull out of the global Paris Climate Agreement, city and state officials in Pennsylvania have spoken out strongly on the need to address the pollution that is causing climate change. The planet’s future and Pennsylvania’s economy depend on taking actions to live up to the emission reduction goals under the historic Paris accord.

With Pennsylvania becoming the nation’s number two producer of natural gas, it is now responsible for emitting 1% of global greenhouse gas emissions! Methane, the main component of natural gas, is a greenhouse gas that is more than 80 times more potent than carbon dioxide. Methane emissions contribute to climate change, are a public health hazard and waste a valuable resource, as methane leaks from the gas wells and pipelines throughout the state. Pennsylvania has a great opportunity to make a difference in greenhouse gas pollution by taking action to stop methane leaks from the oil and gas industry.

The industry PR machine is in full gear and pushing back with their usual message that regulations are not necessary and will put them out of business. State Senator Guy Reschenthaler (R-Allegheny County) introduced a bill that would prevent Pennsylvania from setting methane pollution standards higher than the federal government. With the Trump Administration’s efforts to rollback federal oil and gas regulation, Pennsylvania would be able to do little to control the industry under this bill. 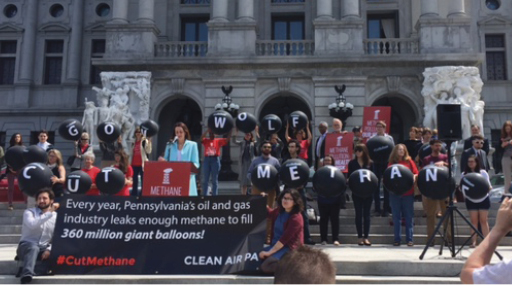 Clean Water Action, along with allies, rallied and lobbied in Harrisburg for strong health and climate protections on methane emissions.

Clean Water Action has been working to counter this propaganda, line up opposition to this legislation and support adoption of Governor Wolf’s methane measures. During DEP’s public comment period, Clean Water Action organized thousands of comments in support of the new source rules, including from 16 state legislators, and also recently brought a large group of supporters to Harrisburg to talk with their elected officials directly and let them know how critical it is that Pennsylvania take action on methane pollution. While the new source measures are being finalized, next steps include ramping up pressure on the governor to follow through on his pledge to introduce regulations for existing sources.

Clean Water Action is working to defeat a bill in the Pennsylvania General Assembly (HB 1071) that would restrict local governments’ ability to address litter problems by prohibiting them from placing a ban or small fee on single-use plastic bags.

Americans use and dispose of approximately 100 billion plastic bags a year, and nearly 95% of those end up in landfills or as litter. More than 165 municipalities nationwide have adopted plastic bag bans or fees to address this issue. In those municipalities there has been a dramatic decrease in pollution from single-use plastic bags. A recent study showed that the number of plastic bags Chicagoans use has dropped 42% in just the first month after city officials imposed a 7-cent per bag tax. Don’t let the Pennsylvania General Assembly take away municipalities’ freedom to decide the best way to reduce litter in their community.

A ban or a small fee to reduce single-use plastic bags is a common sense solution to address a litter issue that negatively impacts rivers and streams, clogs storm drains, blights neighborhoods, and threatens wildlife. Contact your legislator and Gov. Wolf and let them know that this bill is not your bag by telling them to vote NO on HB 1071!

In March, Clean Water Action co-hosted “Breathless: an Air Quality Expo” in Pittsburgh’s Mon Valley. Because of illegally polluting industries, people in this region experience much higher cancer and asthma rates than the rest of Pennsylvania. The event gave residents the opportunity to interact with a variety of legal, political, medical, and scientific to learn about the issue and obtain the tools and resources they need to combat this problem. The event proved to be such a success that a similar event is planned for this summer in Pittsburgh’s East End, which is downwind and impacted by emissions from the Mon Valley.

Communities across Pennsylvania Still at Risk from Lead in Drinking Water

Clean Water Action remains at the forefront of working at the state level, and in Philadelphia and Pittsburgh, to address ongoing issues related to lead in drinking water. Lead exposure has long been known to have neurotoxic effects on humans, especially on children’s developing brains. Childhood exposure to lead can cause developmental disorders, including lowered IQs and increased aggressive or violent behaviors.

Pittsburgh Water and Sewer Authority’s 2016 testing of drinking water found 17% of homes had lead levels over 15 ppb (parts per billion), trigging EPA’s action level for lead. Some Pittsburgh homes had lead levels as high as 75 ppb. Clean Water Acton is proud to partner with the Our Water Campaign, a coalition of local community groups fighting to ensure that all Pittsburghers have access to safe, affordable, publically controlled drinking water. In partnership with the coalition, Clean Water Action has advocated for: distribution of lead filters; prevention of partial-line replacements; passage of a city law requiring landlords to disclose lead pipes to renters and home buyers; developing a program to help low-income ratepayers manage rising water bills; and ensuring that the public gets a seat at the table as solutions are being formed. Clean Water Action also organized an event “Not Another Flint” which drew a standing-room only crowd of citizen advocates, community leaders, and elected officials to hear from an organizer from Flint, MI.

In Philadelphia, Clean Water Action, working in partnership with the Overbrook Environmental Education Center, a local environmental justice organization, launched the Lead Free Philly Campaign focusing on low-income neighborhoods. The first part of the campaign involved hosting several workshops to provide residents the information they need to locate lead hazards in their homes as well as the steps they can take to be safe until those sources are isolated or removed. As a follow up to the educational meetings, attendees are being given the opportunity for additional training that will allow them to become “Green Ambassadors” empowered to assist their neighbors in identifying lead hazards in their homes.

In the state legislature, several pieces of legislation have been introduced to help address overarching issues and barriers that prevent cities from acting to reduce lead. Clean Water Action is supporting three pieces of legislation introduced by Senator Wayne Fontana (D-Allegheny County). One of his bills would require disclosure to potential homebuyers that a residence that they are considering purchasing could contain lead in the tap water or paint, while the other two bills seek to make public funds available to replace lead service lines on private property, one of the biggest sources of lead in drinking water.

Residents Tell Their Stories About Living with Pollution

Clean Water Action is working with Allegheny County Clean Air Now (ACCAN) a community group in the North Boroughs outside of Pittsburgh, where residents are living downwind from air pollution caused by the Shenango Coke Works on Neville Island. This past year DTE, Shenango’s owners, decided to close the plant which has changed the story of this community to one of hope and a look towards a sustainable future. With the plant closed, neighbors are urging DTE to replace it with a solar array. Clean energy infrastructure is vital to help clean up Allegheny County’s polluted air.

To make this vision a reality, representatives from Clean Water Action and ACCAN traveled to Boston on May 4th. DTE Energy was holding their annual Shareholder’s Meeting there, which gave activists an opportunity to speak directly to the leadership at the company. Armed with petition signatures from more than 850 community members, a letter from over a dozen community groups, and supportive resolutions from municipal governments, the contingent called on DTE to replace the plant with a solar array, and to donate their emission reduction credits to make sure improvements in air quality continue.

Local residents also chronicled their experiences into a collection of stories about what it’s like to live in a community plagued by air pollution and the dramatic change to their quality of life that occurred when that pollution stopped.

Elcon Recycling Services is pursuing construction of a facility in Falls Township, Bucks County which will process up to 175,000 total tons of hazardous waste annually. This facility is a potential pollution source whose air and water emissions would put residents and those living downstream at risk.

Elcon recently submitted their permit application to the Pennsylvania Department of Environmental Protection (DEP). Clean Water Action is working proactively to collect letters from residents calling on DEP to protect air and water quality by rejecting Elcon’s permit. If you are concerned about this facility, please contact Maurice Sampson at (215) 545-0250, or by e-mail at msampson@cleanwater.org.