The Deepwater Horizon oil spill in 2010 was an ecological disaster. A few months later, the Kalamazoo River in Michigan experienced a similar disaster - one of the largest inland oil spills in US history. Between 800,000 and 1 million gallons of oil flowed from a 6 foot pipeline break into the river over 35 miles. That pipeline was Enbridge’s Line 6B. A decade later, Clean Water Action is fighting different Enbridge pipelines in Michigan and Minnesota to prevent a similar catastrophe to our freshwater resources.

The Enbridge Line 5 pipeline is a 68 year old oil and gas pipeline that runs through the Straits of Mackinac. The Straits have been identified by University of Michigan as the worst place in the Great Lakes for an oil spill. Clean Water Action has been fighting to decommission Line 5 for the past seven years. We’ve also been fighting to stop Enbridge’s plan to build a dangerous oil tunnel underneath the Great Lakes.

On November 13th, 2020, after 18 months of reviewing violations of Enbridge’s 1953 easement to operate Line 5, Governor Gretchen Whitmer and the Michigan Department of Natural Resources revoked and terminated the 1953 easement allowing Line 5 to operate in the Straits of Mackinac. This was a huge victory, and is something that Clean Water Action and our allies have been demanding and working towards for years. Unfortunately, as of May 13th, 2021 Enbridge has been in violation of Michigan law by continuing to operate the pipeline. Clean Water Action, Indigenous Water Protectors, the Oil and Water Don't Mix Coalition, and members demonstrated in Lansing and Mackinaw City to serve eviction notices to Enbridge and show that we will not stop until our Great Lakes and Straits are safe from the ticking time bomb pipeline.

The fight to decommission Line 5 and stop Enbridge’s plan to build an oil tunnel through the Great Lakes continues. The US Army Corps of Engineers is reviewing Enbridge’s tunnel proposal right now, and we are demanding that they conduct a full review under the National Environmental Policy Act, including an Environmental Impact Statement. We are also continuing to challenge Enbridge's now illegal operation of the existing Line 5 pipeline through direct, political, and legal challenges. 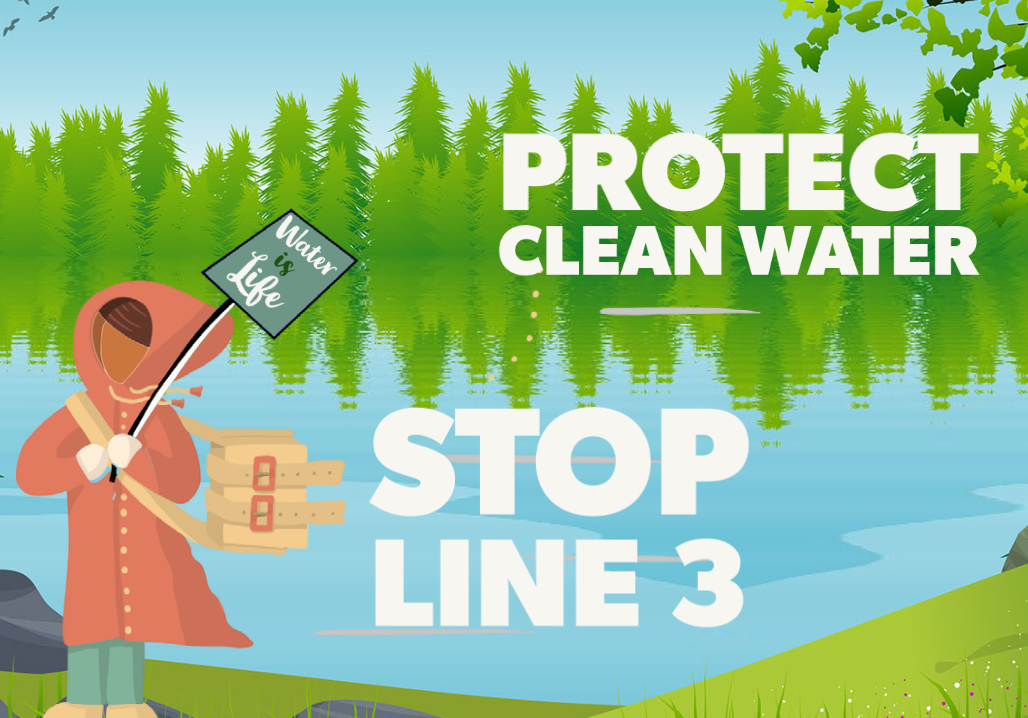 The Enbridge Line 3 pipeline is a 53 year old oil pipeline that transports tar sands oil from Alberta, Canada, down through Minnesota, ending in Superior, Wisconsin. In 2014 Enbridge announced plans to build a replacement pipeline, which sparked a large resistance movement in Minnesota. There have been many concerns about and arguments against the Line 3 project, such as violating treaty rights, abandonment of the old line, climate impacts, endangerment of Indigenous women, children, and two-spirit people, and more. Clean Water Action has been supporting the efforts to stop construction of Line 3, and ensure that our water, climate, and environment are kept safe, and treaty rights are upheld.

On December 1st, 2020, the Minnesota Pollution Control Agency and Army Corps of Engineers granted the final permits for Line 3, and construction began. This came after many years of delays due to resistance and grassroots organizing around the permitting process and in general opposition of the project. Despite incredible public opposition to the project, the permits were nonetheless approved, and construction has completed.

Since construction began, efforts to stop the project have only grown. Many brave water protectors have put their bodies and freedom on the line, participating in nonviolent direct action to slow construction. The White Earth and Red Lake nations submitted requests that a stay on construction be put in place, which was rejected by the Minnesota Court of Appeals. There have been ongoing legal battles against Line 3, with numerous groups and agencies appealing the permits granted by the Public Utilities Commission.

There is still much work to be done, both in the courts and on the ground. We must show our elected officials that protecting water, climate, and upholding treaty rights is important to us. We must move away from dangerous fossil fuels and build towards a just, regenerative future. The very real risks to our water, environment, and communities, as well as ongoing climate impacts as the tar sands oil is moved through Line 3 and exported, are even more critical now then during construction. Shutting down Line 3, ensuring the end of new fossil fuel projects, fixing the regulatory process, and restoring the damaged ecosystems are all important parts of the fight moving forward. 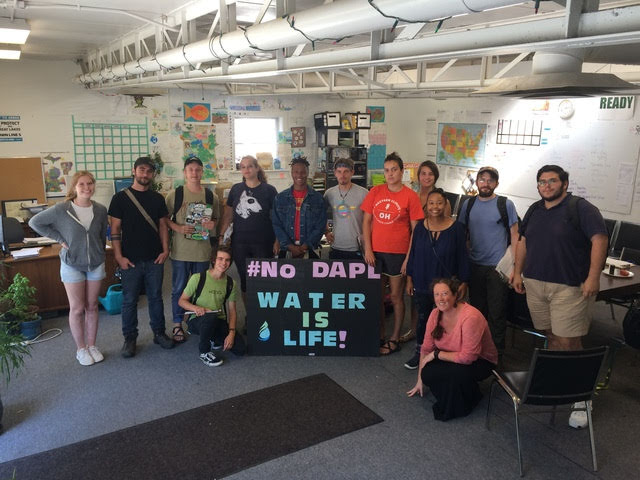 The Dakota Access Pipeline (DAPL) is an oil pipeline that transports crude oil from North Dakota to Illinois. Originally proposed in 2014, this project sparked major public controversy and outcry, culminating in the Standing Rock Protests. Even after the Obama administration stepped in and invoked a federal injunction on a section of the pipeline, though this was quickly reversed by the Trump Administration. Construction was finally completed by April, 2017, and the pipeline has been operational since.

In April of 2020, U.S. District Judge James Boasberg determined that a more extensive review of the environmental impacts was necessary. Yet despite this and an ongoing environmental review by the Army Corps of Engineers, the pipeline is still operating. In April of 2021, Judge Boasberg gave the Army Corps of Engineers and President Biden the opportunity to weigh into whether pipeline operation should continue during this review, yet received no clear answer. Dakota Access Pipeline is operating without a key permit, and must be halted by the Biden administration while this environmental review takes place.

How You Can Help 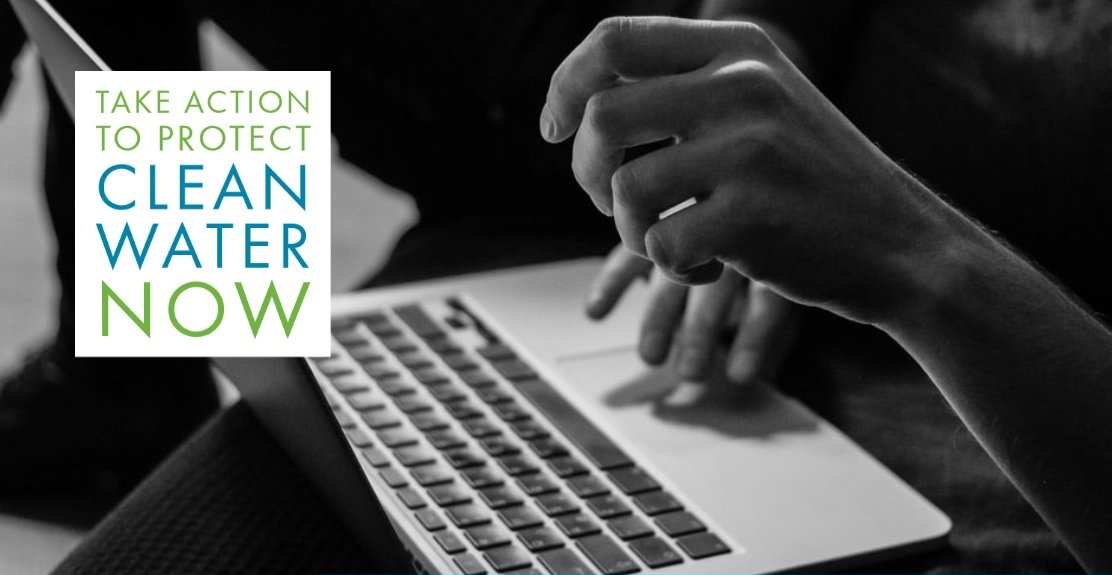 We must show our elected officials that protecting water, climate, upholding treaty rights and building a sustainable future is important to us. Clean Water Action will continue to work alongside  allies in the courts, through government agencies, and on the ground - and you can help.

Take action now and urge President Biden to prioritize protecting clean water over fossil fuels. Neither Michigan nor Minnesota benefit from the Canadian tar sands oil Enbridge transports, and both accelerate climate change. Ask President Biden to respect Michigan’s decision to shut down Line 5 and to order robust and thorough environmental impact statements including analysis of the climate impacts for Line 3 and the proposed Line 5 tunnel.