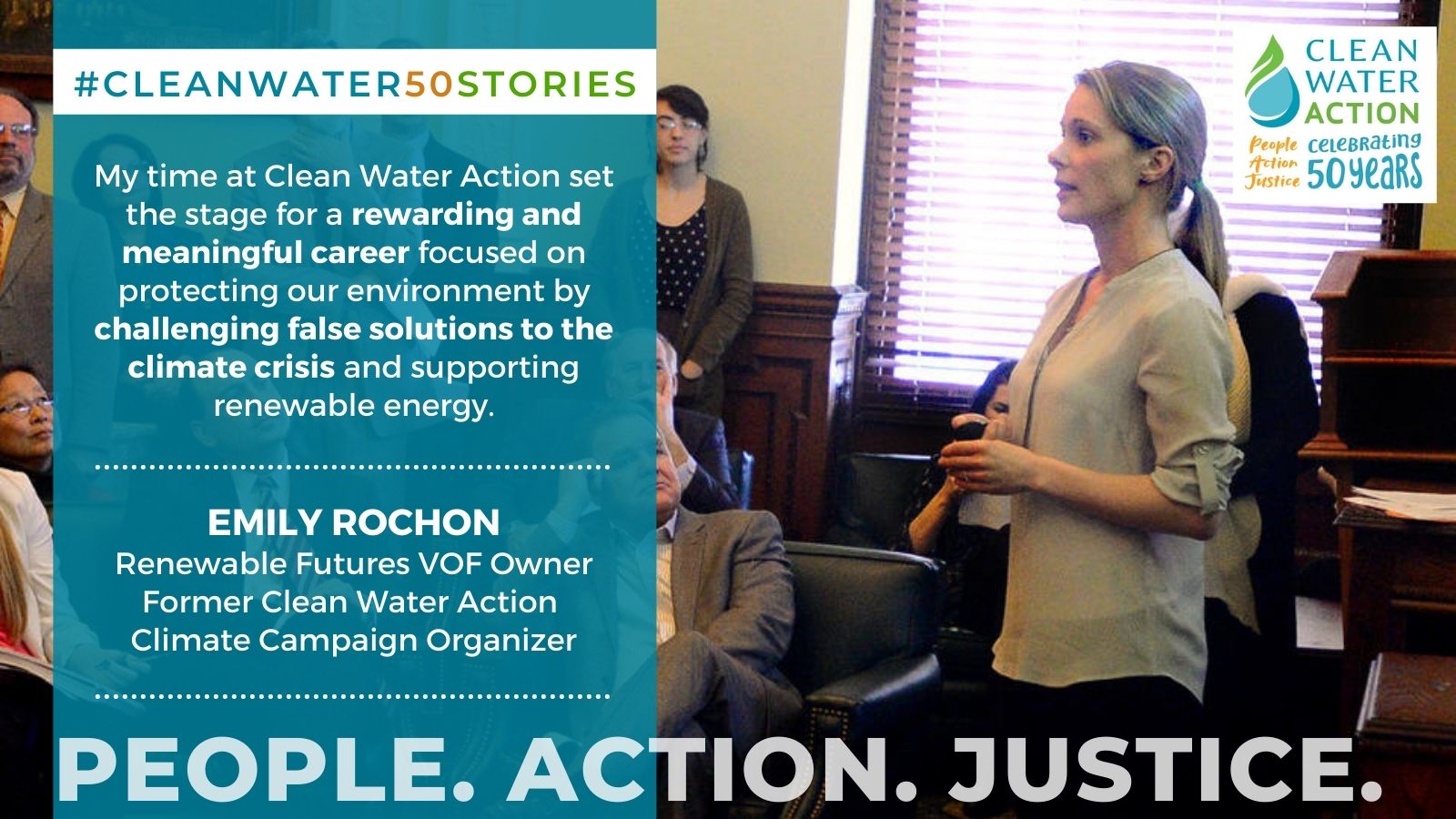 In honor of Clean Water Action's 50th birthday, we are lifting up voices and stories in the Clean Water movement through #CleanWater50Stories. Our story is the story of everyday people who have used their power to make a difference to create a healthier and greener future for all.

Meet Emily Rochon, a true force of nature helping to lead the way for a clean energy future. Emily has played important roles in the clean energy industry, advancing solar and offshore wind projects -- and she got her start as a climate organizer for Clean Water Action in Rhode Island. Emily's story is one of many we will feature throughout our 50th anniversary year, lifting up our history and the people along the way who have contributed to our legacy and created impact. Emily inspires us, and we bet she will you inspire you too!

My career in environmental and renewable energy advocacy started in 2004 as a Climate Campaign Organizer for Clean Water Action in Rhode Island. In that role, I was tasked with organizing the state’s climate coalition to push for the passage of legislation that would establish a renewable portfolio standard that would increase Rhode Island’s reliance on renewable energy. I joined the team in the third year of the campaign, which was co-led by CWA and the Rhode Island Public Interest Research Group.

I fell in love with environmental organizing and lobbying while at Clean Water Action and had the opportunity to learn from veteran campaigners who taught me any number of things, including how to write press releases, leverage media contacts and events to create political pressure, execute campaigns, and build a reputation as a credible and trustworthy voice for the environment.

With these skills, I was able to expand the Rhode Island Climate Coalition to include over 90 environmental, health, and community organizations, faith groups, and businesses and secure passage of our renewable energy legislation. The following year, we defeated an effort to amend and weaken the state’s newly established renewable portfolio standard to include plasma arc gasification (effectively, a waste-to-energy application) as an eligible renewable energy technology.

At the federal level, we played an outsized role in thwarting the Bush administration’s efforts to weaken the Clean Air Act (CAA) by preventing the passage of the Clear Skies Initiative in Congress. A vote to pass the legislation out of the Senate Environment Committee never took place after we spent several months lobbying Senator Lincoln Chafee, a Republican committee member, to vote against the legislation. We convinced him not to support the legislation, which tipped the balance in the committee against the legislation and the vote to pass it out of committee never took place. While the Bush administration attempted to implement the Clear Skies Initiative administratively, after the legislative defeat, those efforts were ultimately overturned in the courts.

What's exciting for you now and for the future?

My time at Clean Water Action set the stage for a rewarding and meaningful career focused on protecting our environment by challenging false solutions to the climate crisis and supporting renewable energy. In 2008, while working for Greenpeace International, I published the report False Hope, which was the first comprehensive critique of carbon capture and storage (CCS), an end of pipe technology that aims to capture carbon dioxide emissions from power plant smokestacks and bury them deep underground. This report served as an important tool for climate activists working to challenge the narrative that coal was an inevitable part of our energy mix and that CCS was, therefore, a necessary solution.

I have also traveled the world advocating for a 100% renewable energy future, and I have worked in the renewable energy sector to make that future a reality. This includes time in the solar sector, developing and proving out business models that lower electricity bills for low-income households, and advocating for policy changes that ensure a more inclusive energy transition. Today, I work primarily in the offshore wind industry where I have the opportunity to build community partnerships and shape programs that support a just, equitable, and sustainable clean energy future.

All along the way, the experience, skills, and relationships that I gained at Clean Water Action have underpinned and supported my efforts. I am forever grateful for the opportunity the organization provided to me and the career Clean Water Action helped launch when it hired me in 2004.