What is Enbridge Line 5?

Enbridge is the largest oil and gas transportation company in North America. They are based in Calgary, Alberta and have been responsible for the two largest inland oil spills in US history.

Among their many oil pipelines in the US and Canada, Enbridge operates Line 5 through Michigan. The pipeline was constructed in 1953 and was meant to last only 50 years. It is 645 miles long and stretches from Superior, Wisconsin to Sarnia, Ontario. Most notably, Line 5 runs through the Straits of Mackinac, wetlands, and over 400 rivers and streams. The Straits of Mackinac connect two of our Great Lakes—Lake Michigan and Lake Huron.

Since it was commissioned in 1953, Enbridge’s Line 5 has been a subject of great controversy. A 2018 poll by EPIC-MRA shows that most Michigan voters want Line 5 shut down to protect our Great Lakes. However, the fossil fuel industry is spending millions of dollars on advertising and lobbying to keep Line 5 operating despite the risk to our Great Lakes. 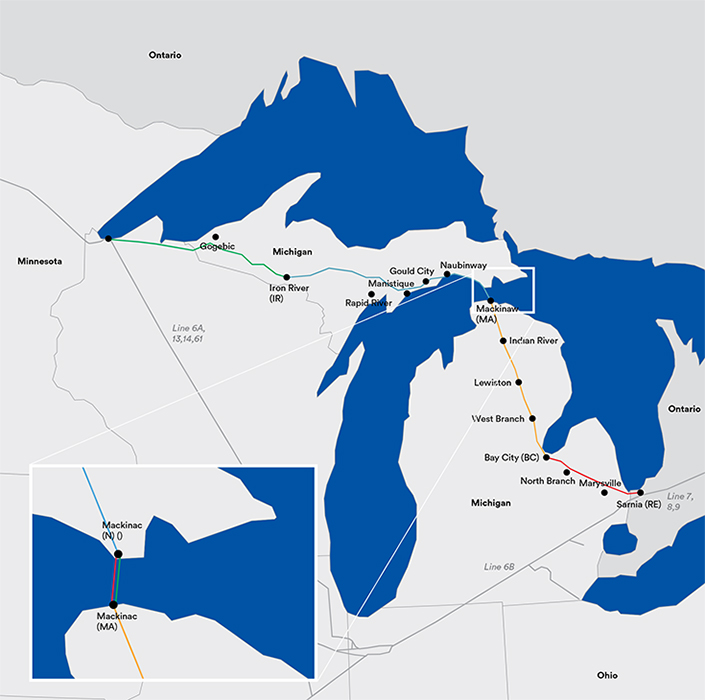 Enbridge’s Past: Why the company can’t be trusted.

Enbridge assures our state that its pipelines are safe, but we have seen one oil spill after another. One major Line 5 spill occurred near Crystal Falls in 1999 when more than 220,000 gallons of oil and natural gas liquids were spilled. When responders ignited the vapor cloud that formed it resulted in a 36-hour fire. Five hundred people were forced to evacuate.

In July 2010, Enbridge’s Line 6B ruptured near Marshall, Michigan and 1.2 million gallons of oil spilled into the Kalamazoo River. For years, Enbridge assured the community that Line 6B was safe. That obviously wasn’t the case – so how can we trust what the company says about Line 5?

Enbridge’s has broken the public’s trust.

On August 1st, 2019, an Enbridge regional gas pipeline exploded in Kentucky. One person died and five people were sent to the hospital while 75 people in the Indian Camp trailer park were evacuated. This was the third Enbridge pipeline rupture since October 2018.

Enbridge’s data shows evidence of cracks and dents in Line 5 along the length of the line. A segment of Line 5, located near the Straits of Mackinac, has lost 26% of its original wall thickness. This metal loss in the wall of the pipeline is due to corrosion, which is a main reason that the pipeline was only supposed to last for 50 years. All steel corrodes with time, and operating this pipeline into the future will only grow more risky.

Since 1968, Line 5 has spilled more 1.1 million gallons in 33 separate spills across the pipeline’s length. In 2018, a 12,000-pound anchor was sliced five cables and damaged the Line 5 oil pipeline. We have seen Enbridge ignore the warning signs in the past, and this is no exception. A Line 5 spill would threaten our Great Lakes and jeopardize the tourism industry that powers our communities. It would put wildlife, fishing, and the lands of indigenous communities at risk.

It can’t be allowed to continue operating. 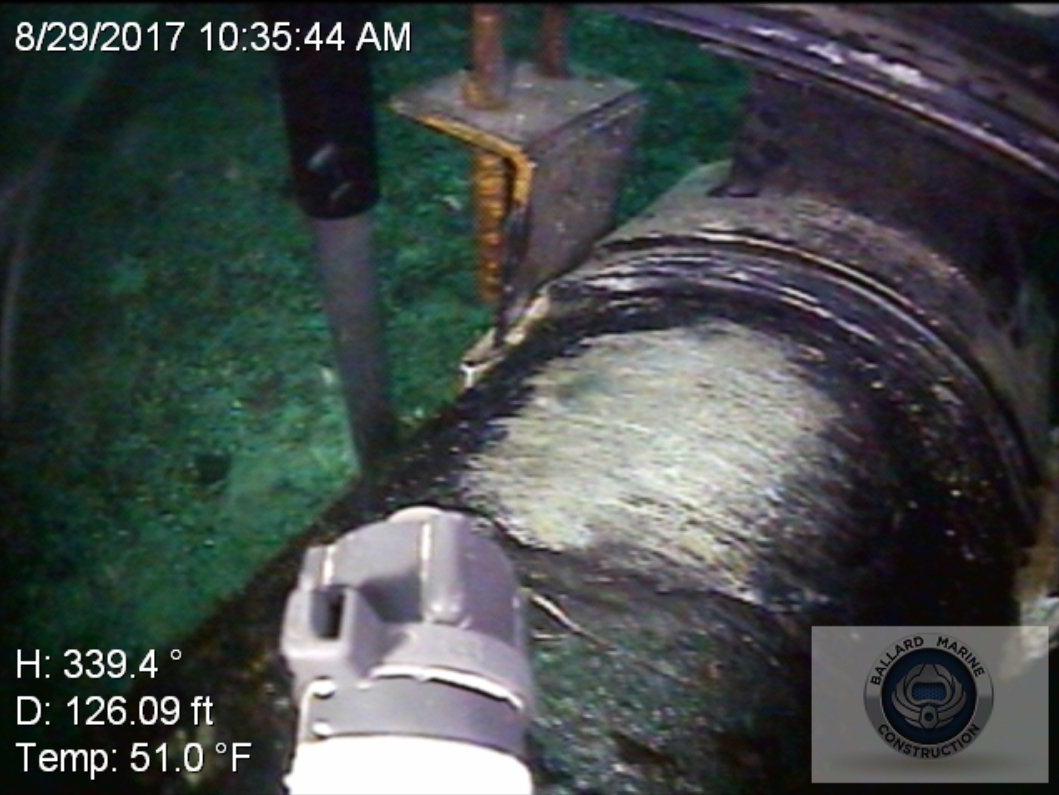 In September 2015, then-Governor Rick Snyder appointed 15 members to the Michigan Pipeline Safety Advisory Board. Members on the board represented a variety of interests, including Marathon Petroleum, Enbridge, and the U.S. Coast Guard. The Pipeline Safety Advisory Board was heavily biased in favor of Enbridge, and produced two Enbridge-funded studies. But even these industry-funded studies illustrated why Line 5 must be shutdown to protect the Great Lakes, and showed that Line 5 primarily benefits Canada. In addition, there are many options to replace the small amount of propane that Line 5 currently provides to Michigan.

During the 2018 lame duck legislative session, one of the first bills taken up by state lawmakers was HB 1197 - a bill to create the “Mackinac Straits Corridor Authority” to oversee Enbridge’s building of an oil tunnel in the Straits of Mackinac for Line 5. After the bill passed, two of the three appointees to the MSCA board resigned within days. Both were quickly replaced and the MSCA signed new agreements with Enbridge to allow for the tunnel to be built before Governor Whitmer and Attorney General Nessel took office in January 2019.

On January 2nd, 2019 Governor Whitmer asked AG Nessel for an Attorney General Opinion on the validity of PA 359, the lame duck tunnel law. AG Nessel determined that due to a title-object violation (meaning the law’s title did not match what it actually did,) PA 359 was unconstitutional and any agreements signed by MSCA were likewise unconstitutional.

After Governor Whitmer attempted to negotiate with Enbridge for a date certain to shut down Line 5, Enbridge abruptly ended negotiations in early June 2019, and sued the state. The suit, Enbridge v State of Michigan, claimed that the AG Opinion on the validity of PA 359 is incorrect and that Enbridge has the right to build an oil tunnel through the Great Lakes.

Shortly afterwards, Attorney General Nessel filed a separate lawsuit- People of Michigan v Enbridge Energy LLC. In People v Enbridge. AG Nessel argues that the easement granted for Line 5 has been void since its inception because in granting the easement, Michigan authorities failed to consider the potential damage to public trust water resources resulting from a Line 5 oil spill in the Great Lakes. 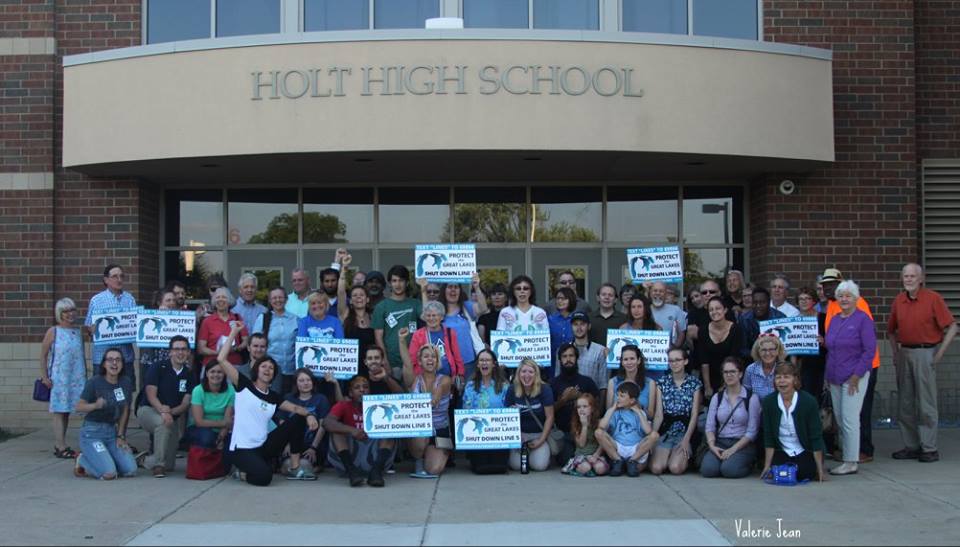 If Enbridge is allowed to build the tunnel, the company has not made a clear commitment to any deadline for its construction, or deadline to have the current Line 5 pipeline out of the water. Governor Whitmer has attempted to negotiate with Enbridge, but instead of negotiating a clear date by which Line 5 would be removed, Enbridge ended negotiations and sued the state instead.

Time and again, the fossil fuel industry has put profits over water and public health. There is only one solution for our water: shutting down Line 5. This is the only way that we can be sure to avoid a devastating oil spill. With Line 5’s deteriorating condition, a spill could happen any day. Shutting down Line 5 ensures that we preserve our precious water resources for generations to come.

Attorney General Nessel’s lawsuit is the fastest way to decommission Line 5 and protect our Great Lakes. Before she was Attorney General, Nessel led the landmark DeBoer v Snyder lawsuit, which won marriage equality at the US Supreme Court. That took fewer than three and a half years to win.  This case will likely not go to the US Supreme Court, and will take much less time. Building a Line 5 tunnel could take ten years or longer, all while the existing Line 5 remains in operation – threatening our Great Lakes.

Not only is shutting down Line 5 good for our water, it’s also necessary to avoid the most extreme impacts of climate change. In order to take meaningful action against climate change, we must eliminate our dependence on fossil fuels. Leading climate experts say that we need to begin to decarbonize our economy now, and move quickly to avoid the worst impacts of the climate crisis. Building an oil tunnel through the Great Lakes shouldn’t even be a consideration. We have an opportunity to create good-paying green jobs now and for future generations, but we must get fossil fuel money out of our politics first. Any support from lawmakers for a Line 5 oil tunnel is support for keeping Line 5 operating for years into the future and our Great Lakes at risk. Help us win this once and for all - take action today. Tell your State House Representative and State Senator to oppose the Line 5 oil tunnel scheme!