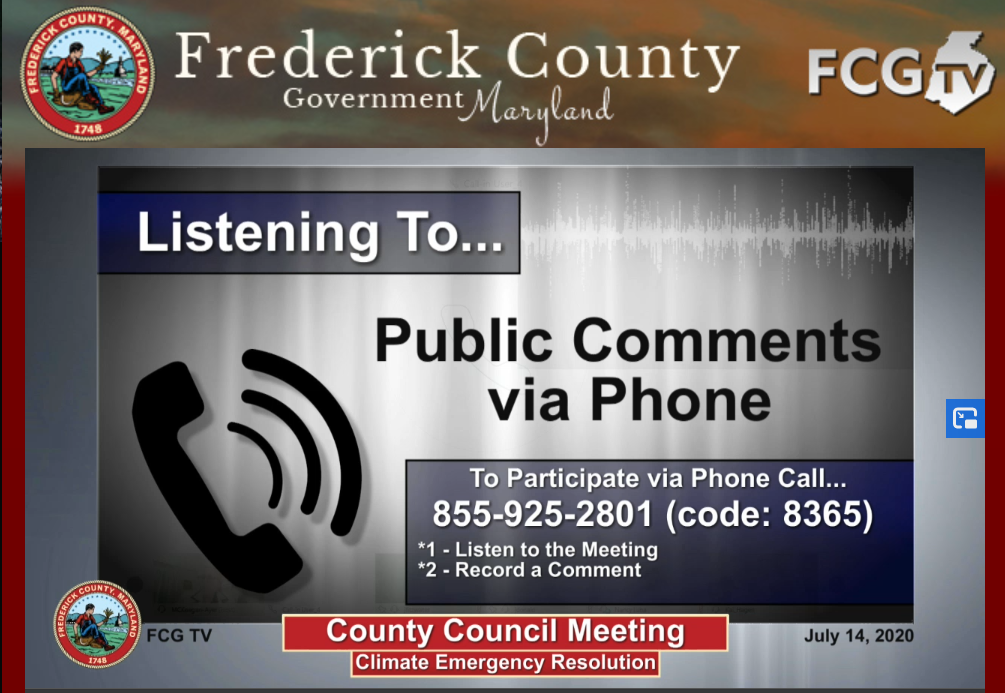 These plans were presented at the June 23rd meeting by Shannon Moore, the manager of the Office of Sustainability and Environmental Resources for Frederick County. The main takeaway from this was an effort for the community to align with the Paris Climate Agreement, as well as the standards of Metropolitan Washington Council of Governments (MWCOG). MWCOG’s environmental goals, as described on their website, are to “engage leaders in various environmental fields from water quality experts to urban foresters.” They note their efforts in restoring local waterways, increasing sustainable energy usage, improving air quality, and preserving land in the region.

The Climate Emergency Resolution includes but is not limited to efforts for sustainable housing, fossil fuel reduction, promotion of environmentally friendly transportation (such as solar powered electric buses) and more. The thing that stood out most to me was housing and transportation. Climate change must be stopped for many reasons, but I think sustainable transportation is what will impact my community the most. The electric buses will provide a means of public transport for the city. This will decrease emissions, traffic, and the existence of this service will educate people on the many options for sustainable energy and solar power. Showing the community that environmental action is something that will make lives easier will in turn encourage people to be environmentally friendly in their own accord once they see how helpful sustainable living is to them, as well as for the planet.

At the workshop on June 30th, much of the discussion was review, as the Climate Change Resolution had already entered the arena before COVID-19 efforts required full attention. The workshop was mainly spent clarifying what specifically would be done and who would be responsible to do it, if the Resolution continues to move forward.

Finally, I was able to hear from my fellow Frederick County residents at the Climate Resolution’s public hearing on July 14th, as well as give my own testimony. I was impressed to hear the passionate arguments of twelve other County residents, all in favor of the Climate Emergency Resolution. Barb Trader, a local environmental activist, gave a very compelling argument on the “growing momentum for change” in our country, and how Frederick County will be joining the ranks of many other places with sustainable plans in place. Another speaker mentioned the potential for job and home losses, disease outbreaks, and the agricultural damage potential of global warming. Arguments such as this that expose the worldwide tragedy of climate change remind me that there is no option here, and that sustainability must be a reality. With so many strong voices pressing for environmentally friendly action, I know that this united front will bring across change. My own testimony at the hearing was that of a wildlife advocate. I pointed out the habitat destruction and pollution that organisms face if serious action is not taken to curb climate change. I concluded my statement acknowledging myself as a young person wanting to inherit an Earth as beautiful as the one I grew up in.

At the first meeting on June 23rd, Councilmember Hagen noted the impressive environmental achievements of Frederick County so far, but also emphasized that our work is nowhere near done. This mentality really resonated with me as a college student entering the adult world. I am overwhelmingly proud that my community is moving in such a sustainable direction, but I know this position is not universal. In fact President Trump’s decision to withdraw from the Paris Agreement officially goes into effect this November, leaving counties such as mine to develop their own sustainable goals.

Sometimes environmental work feels like an uphill, never-ending battle. But, seeing potential wins like this one come up reminds me that we must keep fighting the good fight, and that a unified community is one that can create change. To move mountains tomorrow, we must start lifting stones today.

Want to send your own message to the County Council? Click here!