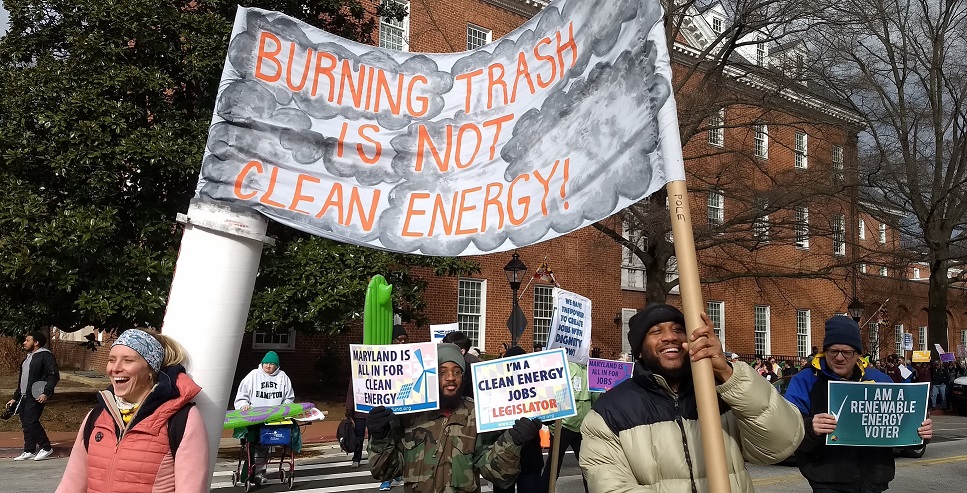 In the first weeks of the legislative session, 60 organizations signed on to this testimony in support of a suite of bills to end artificial incentives the state of Maryland gives to trash incineration, and support the development of zero waste alternatives.

To the Maryland General Assembly and Governor Larry Hogan,

As organizations working for a stable climate, clean air and water, thriving local businesses, and healthy communities, we urge you to stop artificially propping up trash incineration and promote policies to divert waste from landfills and incineration to reduce pollution, sequester carbon, and create good, green jobs in Maryland in 2020.

For too long, trash incineration has enjoyed subsidies and benefits in Maryland that have made our state a target for the industry and complicit in polluting the air in our own communities. In 2011, trash incineration was declared a Tier 1 renewable energy resource, on par with wind and solar, and became eligible for millions of dollars in public subsidies. Around the same time, new trash incinerators were proposed to be built in Baltimore City, Frederick County, and Prince George’s County, threatening our communities with increased air and water pollution and financially burdensome contracts. Thankfully, people in these communities stood up to say no to trash incineration, and ultimately, none of those incinerators were built. Now, communities across Maryland are working for a zero waste future that is more beneficial to our environment and economy. It’s time for Maryland to stop subsidizing trash incineration and start supporting the local movements toward composting, regenerative agriculture, and waste reduction that we need to build our communities and fight climate change.

Trash incineration also contributes more to climate change than even the dirtiest of energy sources, coal. In 2015, the Wheelabrator Baltimore incinerator emitted about twice as much greenhouses gases per amount of energy produced, on average, as each of the coal plants located in Maryland. The Dickerson trash incinerator in Montgomery County produces 500,000 tons of greenhouse gases that contribute to climate change. Trash incinerators are not a part of the climate solution and are not low carbon methods for energy generation. For both our local communities and the climate, trash incineration is bad news.

Despite this, trash incineration remains artificially propped up by Maryland state policies, especially our Renewable Portfolio Standard. According to a Department of Legislative Services report, about 10% of Renewable Energy Credits in 2017 went to subsidize trash incinerators. If applied to constructing other Tier 1 renewable energy sources, these credits would support new, high-paying Maryland jobs, increase GDP during the construction of these facilities, and reduce Maryland’s carbon emissions. Maryland’s trash incinerators were built decades before they began receiving RPS subsidies in 2011: removing subsidies is not a bait and switch, but simply correcting a mistake that was made 9 years ago.

As they earn credits for producing “renewable” energy, these trash incinerators are also artificially improving recycling rates, as Maryland counties can credit the burning of trash and the use of the leftover toxic ash as recycling. This definition is another way that Maryland greenwashes trash incineration, and that needs to change.

It’s especially wrong for Maryland to prop up trash incineration, when the alternatives are so much better for our health, our climate, our economy, and our communities. Leaders across Maryland are already working to build a healthier zero-waste future:

Composting Maryland’s organic waste could reduce our waste stream by half, and composting can actually turn a profit for municipalities, unlike incineration, landfilling, or even most forms of recycling. It provides a market for local business: we can responsibly dispose of our waste and generate a usable product on the other end. As an added benefit, compost sequesters carbon and rebuilds the microbiome when added to soils, providing resiliency benefits and reducing the need for fertilizers, herbicides, and pesticides.

To support Maryland's transition away from trash incineration, we must require large food waste producers send their food waste to compost when possible, support farmers to create enough compost for on-farm use and use compost as a soil amendment, make funds available to help new composting businesses, and create a plan for siting compost facilities in places to promote local growth. Already, composting in Maryland “employs two times more workers than landfilling, and four times more workers than incineration. On a per-capital-investment basis, for every $10 million invested, composting facilities in Maryland support twice as many jobs as landfills and 17 more jobs than incinerators."With greater support, this sector could create even more jobs, building toward a healthy zero-waste economy in Maryland.

As we move into our next decade, now is the time to correct the mistakes of the last. We ask Maryland’s General Assembly to stop these harmful subsidies to trash incinerators and help us move to a future where our food waste is a tool for economic growth, carbon sequestration, rebuilding our depleted soils, and a healthier Maryland for us all.

The Fund for Change

The Zanvyl and Isabelle Krieger Fund