Maryland’s legislative session runs from January to April every year.

Septic systems are a growing problem in Maryland, but the state has taken a hands-off approach that allows septic systems to pollute our groundwater. Two of Clean Water Action’s septic-related bills passed during the 2019 legislative session. These bills included language to define a failing septic system and undid the requirement that large volumes of water from home water treatment systems be flushed into septic systems, which can lead to premature failure and improperly treated waste reaching ground and surface water. Clean Water continues to work with others to develop a better system for repairing failing septic systems.

The Keep Antibiotics Effective Act passed and went into effect without the Governor’s signature. The bill clarifies definitions for the prophylactic use of antibiotics in farm animals and requires reporting of antibiotic use to the Department of Agriculture and the legislature. Clean Water worked on the original legislation in 2017 and, along with allies, submitted more than 1,000 public comments to the Maryland Department of Agriculture in early Fall 2018 in opposition to regulations that gutted the intent of the bill. Clean Water worked to pass a stronger bill in 2019, and successfully worked with the department to rewrite and resubmit the faulty regulations. 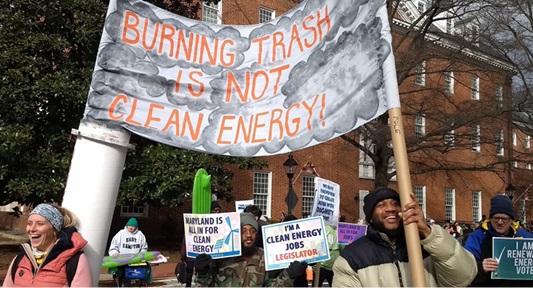 Chlorpyrifos is a dangerous pesticide that was nearly  banned by the Environmental Protection Agency (EPA) prior to the Trump Administration. Largely used on orchards and golf courses, chlorpyrifos is not safe at any level and is banned in many countries. Although the Maryland Senate failed to advance legislation to restrict the use of chlorpyrifos in the state, Clean Water Action staff are engaged in a summer campaign in targeted districts to keep the legislative energy primed and ready for early action when Maryland’s legislative session starts again in January 2020.

The General Assembly also passed the Clean Energy Jobs Act, requiring that Maryland utilities purchase 50% of their energy from sources classified as “renewable energy” under the state’s RPS by 2030. While Clean Water supports urgent, transformative action to fight the climate crisis, the bill has some significant flaws, most notably that it increases the amount of money available to subsidize burning trash for energy. Since 2011, trash incineration has received the same “clean energy” credits as renewable sources like wind and solar. However, unlike wind and solar, trash incineration produces significant air pollution that impacts nearby communities and greenhouse gases that contribute to climate change. Burning trash for energy is incredibly polluting, with a significant price tag for associated health issues, and Clean Water Action continues to stand with community allies against this practice.

Clean Water Fund is the fiscal agent of the Anacostia Park and Community Collaborative (APACC), a network of community-based and citywide nonprofit organizations working together to catalyze and assist the transformation of the Anacostia River corridor. The goal is to create a broad and diverse network of organizations to work together for clean water and other quality of life goals in the Anacostia River Corridor. APACC also identifies community leaders and connects them with organizations whose programs address local needs and interests. Clean Water continues to engage government agencies on planning efforts such as Kenilworth Park North, Sustainable DC 2.0, and the Anacostia River Sediment Remediation Project, and connect those efforts with APACC’s work to transform the Anacostia River into an equitably developed and world-class waterfront adjacent to healthy, thriving communities. Outreach and engagement on these and other issues created increased opportunities for member and community participation at public events such as PARK(ing) Day and Art All Night, and at APACC-sponsored events such Resilient DC workshops, candidate forums, and community festivals and picnics at Fairlawn and Mayfair Mansions. 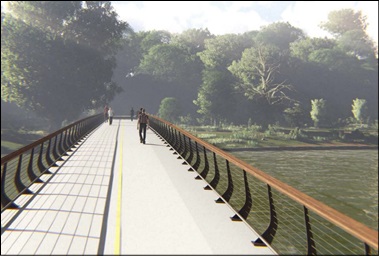 For too long communities along the Anacostia have not had adequate access to the amazing natural resource of the river and its waterfront parks. The good news is that the District Department of Transportation is planning to construct a pedestrian bridge from Kenilworth Park across the Anacostia River to the National Arboretum.

Some DC residents are worried that the bridge will conflict with boating use of the river, but Clean Water Fund and APACC believe that the bridge can be designed to accommodate all uses, and that denying access to the river to the predominantly underserved, African American communities living nearby is an injustice.

Take action and help build a bridge from Ward 7 to the National Arboretum!

This bridge will provide residents of Kenilworth, Eastland Gardens, Mayfair, Parkside and other neighborhoods direct access to the National Arboretum, and it will expand the Anacostia River Trail. Click here to learn more about the issue and the work of APACC to support the growth of a thriving, diverse, and sustainable community along the Anacostia River.

Clean Water Fund’s Anacostia River program continues to grow with the recent announcement that our DC office will serve as the Anacostia Ambassador for the Urban Waters Federal Partnership. Erin Garnaas-Holmes is the Ambassador to the Urban Waters Federal Partnership in the Anacostia Watershed, one of 19 partnerships nationwide. As Ambassador, Erin works to coordinate government efforts, connect residents to their urban waterways and highlight the social and economic benefits of restoration. “Clean Water Fund has a long-term commitment to equity and engagement around the restoration of the Anacostia River, and we are pleased to increase that commitment by hosting Erin and the Anacostia Ambassador program,” said Chesapeake Regional Director Brent Bolin. 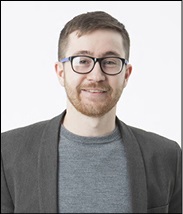 Erin is an urban designer and planner who has consulted on riverfront design and urban development efforts throughout the country, including award-winning projects on the Charles and Mississippi Rivers. Before earning his Master’s Degrees in Urban Planning and in Landscape Architecture, Erin launched his career at Bread for the City, a District-based non-profit, where he helped create one of the city’s first rooftop farms. Erin grew up wading in creeks of the Rocky Mountains and dreams of swimming in the Anacostia River someday soon.

Governor Northam committed to increase conservation funding to 2% of the General Fund. His budget, released in December, made a big step toward that commitment and included many of Clean Water’s priority funding requests. While much of the budget proposed by Governor Northam for those key programs was not accepted by the legislature, historic funding levels for the Ag Cost Share program passed thanks to a coordinated bipartisan effort by advocacy groups across the state. Below is a quick rundown of the priority budget items:

The Stormwater Local Assistance Fund, which provides matching grants to localities for projects that reduce polluted runoff, secured $10 million for FY20. This is below the $50 million that was requested but, thanks to an amendment by Senator Hanger, the program avoided being zeroed out. In addition to funding, a bill was passed to require an annual analysis and report to quantify needs for stormwater investments — similar to the to the annual Agriculture Needs Assessment taken up by the state each year.

The Virginia Land Conservation Foundation, which provides state-matching grants for the preservation of special lands in the Commonwealth, unfortunately had the requested additional $11 million removed from the Governor’s budget. Clean Water Action is disappointed there was no increase in funding for the land conservation grant programs which are critical for continued preservation of Virginia’s historic, cultural, and natural resource lands. Current funding falls well below needed levels. 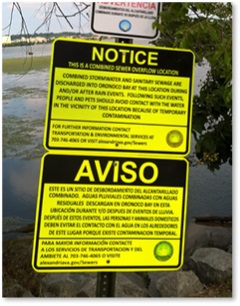 For the Department of Environmental Quality, the Governor’s proposed increase of $2.5 million was not supported in the final budget. The funding would have helped support staff that monitor and enforce regulations that protect natural resources. However, DEQ did receive $859,000 to do a full update of their website and invest in external communications as part of Executive Order 6.

Coal Ash Win: Dominion Energy currently stores more than 28 million tons of coal ash — the waste product generated when coal is burned for energy — in four, unlined, leaking pits on the banks of the Elizabeth, James, and Potomac Rivers. This waste contains many harmful chemicals that put our health at risk. For years, Virginia has kicked the can down the road when it comes to protecting water from this toxic waste. In 2019, thanks to Clean Water Action and many partners, the Virginia legislature finally passed a bill to require clean closure of coal ash ponds. This bill  includes provisions allowing for full excavation and/or recycling of coal ash in an environmentally and economically responsible way.

A big thank you to Senators Scott Surovell and Amanda Chase, and Delegate Jennifer Carol Foy, for their extensive work on this issue. Here are the highlights from the bills:

— All four Dominion coal ash storage sites will be completely excavated. At least a quarter of the ash will be recycled into products like cement and concrete, with the remainder placed in modern, lined landfills. The construction of any new landfills will be subject to local zoning and permitting requirements.

— Where any of the coal ash needs to be moved offsite, Dominion must develop a transportation plan in consultation with the affected localities and consider alternatives to trucks — like rail and barge.

— Dominion will prioritize hiring local workers throughout the closure process.

— The State Corporation Commission will retain oversight of the cleanup expenditures — as it would with any other environmental compliance measures — ensuring that any and all costs are reasonable and prudent.

Maryland Program Organizer Jennifer Kunze applied for and was accepted into Namati’s Legal Empowerment Advocates program, a one-year fellowship focused on training environmental leaders on legal tools available to advance their work. The program is providing legal and logistical support for our work in Baltimore City around improving the city’s response to chronic overflows of raw sewage into homes throughout Baltimore. More than 5,000 households report sewage overflowing within their homes in the city each year, a figure that has grown exponentially in the past two decades as the city closed off sewer outfalls. Through this program, Jennifer is connecting people with the reimbursement programs that are available to them, and organizing to mandate that the city improve the program to make it accessible to more households and better reflect the real costs of sewage backups.

Summer Interns: The Baltimore office is busy this summer with important campaigns to protect public health, and has brought in three summer interns to help! Hailing from Towson, UMBC, and Johns Hopkins University our interns bring experience in policy research, GIS mapping, zero waste practices, and much more to the team. They’ll be working together to advance our work on preventing sewage backups into people’s homes in Baltimore, improve regulations of and assistance for septic systems, develop state programs to support zero waste development, support plastic bag bans in counties across Maryland. 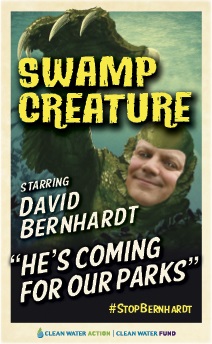 Despite promises from President Trump to “drain the swamp” that he believes exists within the federal government, he has appointed an unending line up of special interest lobbyists into leadership positions. These corporate special interest allies then get to work looting their agencies and changing policies to benefit their former clients. Of all of these “swamp creatures” the one who has proved to be the swampiest is Interior Secretary David Bernhardt. A former oil and gas lobbyist, he has to carry with him a card listing all of his conflicts of interest with former clients doing business with his department.

Clean Water Action has raised awareness of this swamp creature’s attacks on our public lands and water, donning swamp creature masks and following him to Congressional hearings. Maryland Program Organizer Jennifer Kunze said “It was stunning to sit behind Secretary of the Interior David Bernhardt a few weeks ago and listen to him dodge accountability from the House Natural Resource Committee and say he’s not losing sleep about climate change. He’s using his position to benefit his oil and gas buddies — he really is a creature of the swamp.”