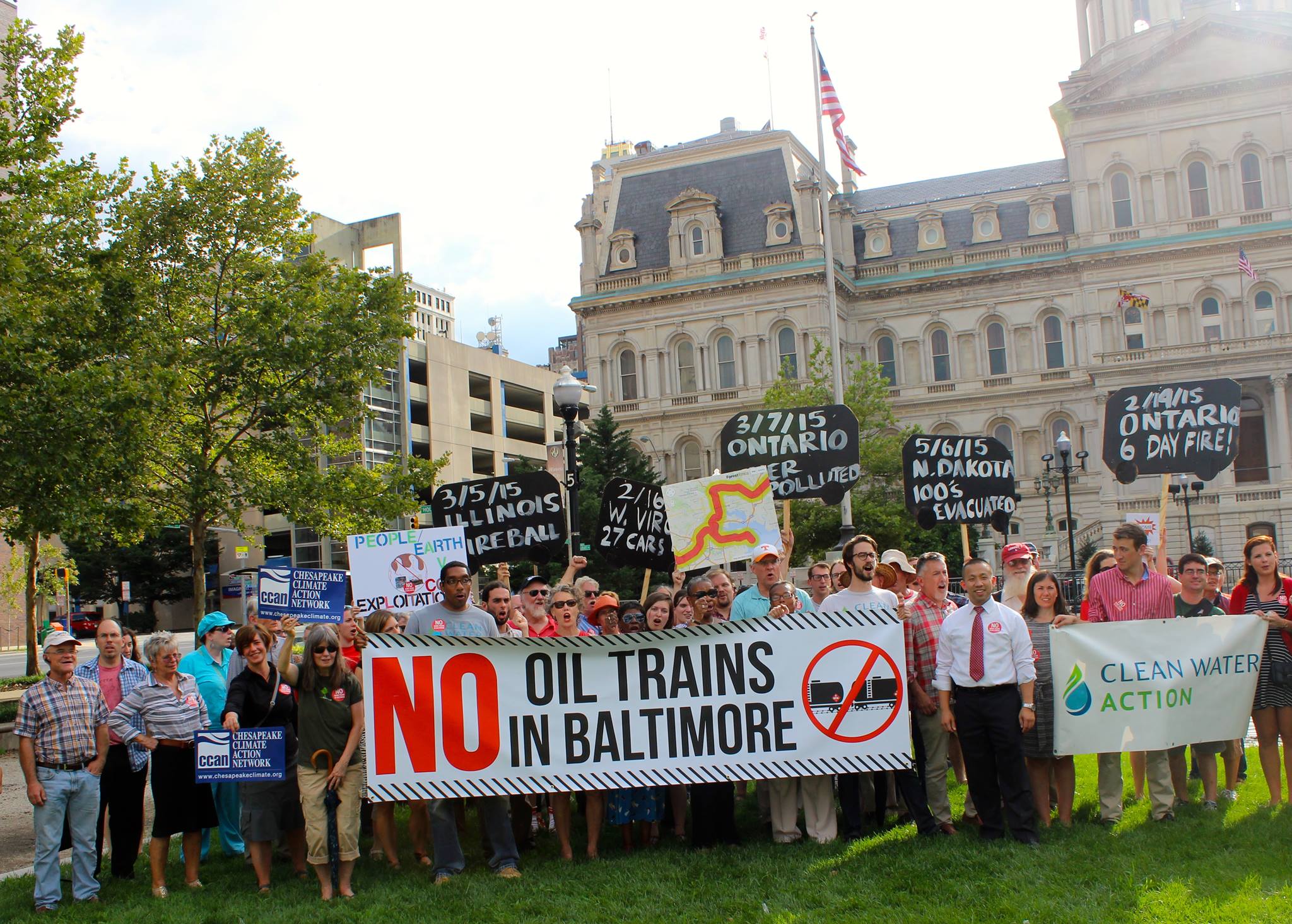 On Wednesday, February 21, the Baltimore City Council's Land Use and Transportation Committee will hold a hearing on the Crude Oil Terminal Prohibition: Baltimore's best chance for preventing a deadly crude oil train explosion.  Rally with us at noon in front of City Hall!  And to learn more, read our comments on the bill below.

On behalf of Clean Water Action, our over 8,000 members in Baltimore City, and our over 35,000 members in Maryland, I write to express strong support for Bill 17-0150, the Crude Oil Terminal Prohibition. Baltimore City must act to protect not only the 165,000 City residents who live in the potential impact zone for a crude oil train explosion, but communities along the rail lines linking Baltimore with drill sites and refineries as well as people across the planet from the threat posed by these extreme methods of crude oil extraction and transport that are driving climate change.  I live in the potential impact zone myself, and I have been working with our members, residents of the impact zone, and rail safety advocates for three and a half years to reduce the risks associated with and prevent the expansion of crude oil train traffic to and through Baltimore. Bill 17-0150 represents a permissible and legal action that is the best option Baltimore has to protect itself from explosive crude oil trains.

Baltimore has been put at risk by proposed crude oil terminals.

In summer 2014, a Texas-based oil company applied to the Maryland Department of the Environment for permits to begin transferring crude oil from trains at a facility in Fairfield.  This terminal alone would have caused 380 million gallons of crude oil to travel by rail through the city every year - the equivalent of more than ten thousand tank cars full of crude oil traveling on old infrastructure and across dangerous at-grade crossings in South Baltimore.  We worked with residents of the blast zone in South Baltimore and throughout the city to oppose this permit application, and won. But we cannot count on such a hard-fought victory being repeated in the future, when new crude oil terminals are proposed. In denying Targa its permit, the state could only consider air pollution, not public safety from catastrophic explosions.  MDE’s regulatory process is therefore not a reliable method to prevent the construction of additional terminals, which pose unacceptable risks to surrounding communities, the city at large, and the climate. To prevent new terminals from being proposed that will be difficult or impossible to stop, Baltimore City must pass Bill 17-0150.

This legislation is legal and appropriate.

In July 2015, with public concern about this issue mounting, the City Council’s Land Use and Transportation Committee held a legislative oversight hearing to investigate “rail shipments of crude oil, fuel oils, and non-crude oil and distillates that are traveling through Baltimore, and which, in some cases, are being shipped to a terminal in Fairfield for transfer from trains to barges for their transport to East Coast refineries, and the safety and environmental concerns related to this activity.”

At that hearing, I, many of our members, and the general public heard the mounting evidence that shipments of crude oil by rail pose a danger to the city.  These dangers are well understood, and I won’t enumerate them here.  But most notably, Robert Maloney, then-director of the Mayor’s Office of Emergency Management, said that a potential fire may be too dangerous or environmentally devastating to actively fight against.  We have seen this occur in other locations where crude oil trains have exploded: often, they are left to burn out.  This would pose unacceptable harm to residents of Baltimore City.

However, both rail carriers and the city government have little legal authority to halt the shipment of crude oil by train. At the legislative oversight hearing, David Pigeon, a spokesman for Norfolk Southern, said, “We have no choice. We have to haul hazardous material, including crude oil. If a customer gives us a tank car that meets safety standards, we have to haul it."  If a company contracts with a rail carrier to ship legal cargo, the rail carrier cannot deny it, however unsafe; crude oil terminals in Baltimore City would be able to require rail shipments. Likewise, Baltimore City itself cannot prohibit crude oil trains, as outlined in the Baltimore City Law Department’s comments for the legislative oversight hearing (PDF).  The Department enumerated the aspects of crude-by-rail transport that Baltimore City is barred from regulating, including types of freight shipments, the speed of freight, safety or maintenance procedures, and other aspects of train operations themselves. However, these comments identified that Baltimore City could regulate operations at facilities not owned or controlled by a railway, such as terminals, and referenced multiple legal precedents in which cities did so. Since 2016, Portland, OR and Vancouver, WA have all used their zoning powers to limit the construction of fossil fuel infrastructure such as crude oil terminals. Bill 17-0150 would accomplish this.

Baltimore cannot look to the federal government for action on crude oil trains.

In the years since the 2015 Legislative Oversight hearing, not only has precedent been further established that Baltimore City has the authority to pass legislation like Bill 17-0150; the need to do so has become even more urgent and clear.  In its testimony for that hearing (PDF), the Baltimore City Department of Transportation wrote that, since the Federal government regulates the shipment of hazardous materials across state lines, and in particular since rules were being promulgated at the Federal Railway Administration (FRA) and the Pipeline and Hazardous Materials Safety Administration (PHMSA) in response to crude oil train explosions, there was no need for the city to take regulatory action.  However, much has changed since 2015 that makes that trust in the FRA and PHMSA misplaced.

One year after the hearing, in October 2016, the Office of Inspector General published an audit report of the Pipeline and Hazardous Materials Safety Administration, titled Insufficient Guidance, Oversight, and Coordination Hinder PHMSA’s Full Implementation of Mandates and Recommendations (PDF).  It found that the agency had completely disregarded key deadlines for issuing rules to address oil train safety and spill response. Between 2005 and 2016, the PHMSA failed to implement one-third of its mandates to issue rules protecting people from hazardous shipments, and failed to resolve over half of the recommendations of the National Transportation Safety Board (NTSB) – including one to lower the threshold for spill response plans for trains carrying highly flammable oil.  Meanwhile, the NTSB included the completion of rail safety initiatives in its 2016 “Most Wanted List,” specifically citing crude oil trains. Even in 2016, the PHMSA was not adequately protecting the country from crude oil train and other fossil fuel disasters.

One month after that report was issued, President Trump was elected, and his administration has aggressively pursued a deregulation strategy that is taking away any hope that the federal government could adequately regulate these risks.  With a stated goal of erasing two regulations for every one put in place, the administration has delayed or rescinded numerous regulatory actions, including a ruling that would have required high-hazard trains carrying freight like crude oil to use pneumatic brakes - a measure that would have prevented the Mosier, Oregon derailment that occurred in 2016 as well as many others.  Maryland’s own Attorney General Brian Frosh has joined with colleagues from across the country to urge the administration to close a loophole that allows crude oil to be shipped by train with very high vapor pressure, with the highest likelihood of catastrophic explosion (PDF).  But even this sensible regulation is stalled indefinitely.

This month, the FRA is in disarray after a string of passenger train crashes, many of which occurred on rail lines where freight also operates and would have caused far worse catastrophe if crude oil trains had been involved.  Its deputy administrator resigned a few weeks ago after troubling ethics violations surfaced, and the FRA has been without a permanent Administrator since Trump took office.  As the price of oil continues to rise,  domestic production increases under President Trump, industry anticipates more crude-by-rail transport,  and offshore drilling in the Atlantic becomes possible, it is likely that new terminals could be proposed for Baltimore - a dangerous future that we can avoid by passing Bill 17-0150.

Likewise, we cannot hope that the administration will adequately address the climate crisis which puts Baltimore residents and people all over the world in danger.  This Council recognized the danger posed by climate change when it unanimously adopted Resolution 17-0029, Supporting the Paris Accord, when President Trump announced his intention to withdraw from this international agreement.  Among the many actions listed that Baltimore City must take to fight climate change, this resolution committed the city to “limit the development and expansion of facilities that handle crude oil.”  At a time when we know we cannot invest in new fossil fuel infrastructure without accelerating catastrophic global warming, Baltimore City must look to the future of renewable energy development instead of expanding dangerous fossil fuel  infrastructure.

Finally, crude oil trains pose a significant risk to Baltimore City’s drinking water, stormwater, and sewage infrastructure. For example, Druid Lake is within a half-mile of a sharp curve in the freight line that crude oil trains have taken through Baltimore, and sharp curves increase the likelihood of a derailment.  This lake is far more than a center of recreation - it provides 58% of the Baltimore City drinking water system’s post-treatment water storage, and 91% of the storage capacity for distribution zone 1, covering the oldest parts of the city (PDF).  Furthermore, Baltimore City is engaged in a capital improvements project to transition to underground storage tanks at the site, at a cost of $140 million.  A crude oil train explosion near the lake would endanger both that significant investment and half of the city’s drinking water.  A crude oil train explosion anywhere in the city would send burning oil across our streets and into our sewage pipes, reversing the significant investments the city has made in improving our sewage system to eliminate sewage overflows and improving the water quality of the Inner Harbor. Crude oil trains pose an unacceptable risk to clean water in Baltimore, as well as to our air, climate, infrastructure, and lives.

For these reasons and the many more you will hear at the public hearing on February 21, it is imperative that you support Bill 17-0150, the Crude Oil Terminal Prohibition.  Thank you.