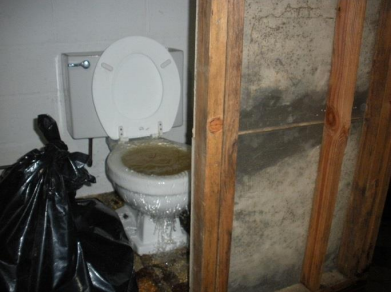 April showers don't only bring May flowers: in a city with sewage infrastructure in desparate need of expansion and repair, they also bring sewage into local streams, city streets, and even people's homes.

Two years ago, Baltimore City signed a new Consent Decree, the agreement among the city and state and federal regulators that governs how the city must address sewage overflows. This modified consent decree, written after the city did not meet the original 2016 deadline for repairs to be completed, commits the city to making major infrastructure repairs to the Back River Wastewater Treatment Facility by 2021 and eliminating remaining sources of sewage overflows by 2030.

It says less about the basement sewage back-ups that have plagued city residents - increasingly so over the time period that other repairs have taken place. Basement back-ups of sewage are a significant public health threat, exposing people to dangerous fecal bacteria and irreversibly damaging people's property. And they're a problem that has grown in the past decade: the number of basement backups in Baltimore rose from from 622 in 2004 to nearly 5,000 in 2015, according to an investigation by the Baltimore Sun. Repairs aimed at stopping overflows of sewage into waterways have contributed to sewage overflows in homes - "because," according to DPW officials as reported in WYPR, "the sewage has to go somewhere."

One year ago this month, Baltimore City launched a new program required by the 2017 Consent Decree: making a $2 million city fund available to city residents who experience a basement sewage back-up. But those funds are only available if the backup meets certain criteria (if it was caused by a rainstorm under a certain size, if there were not also rags and debris that contributed to the back-up), for certain costs (clean-up costs only, up to only $2,500, no lost or damaged property), and if the impacted person follows certain steps (calls 311 within 24 hours of the backup, finds and submits the application on time, provides receipts). We and our partners at the Environmental Integrity Project argued at the time that these restrictions would block the program from helping many people who needed city support to deal with sewage back-ups that were no fault of their own.

Now, one year later, that's proven true. At the Annual Public Meeting about progress on sewer system repairs in January - another step toward transparency required by the Consent Decree - DPW employees shared that only 10 households were successfully reimbursed through this program in 2018. That's 82% of the 67 households that applied - about a quarter of them rejected because the household did not call 311 within 24 hours of the backup occurring, and another quarter rejected because DPW inspectors also found debris in the pipe that, along with rain, may have contributed to the backup. This record shows that restrictions on the Expedited Reimbursement Program are stopping it from assisting households that need its help.