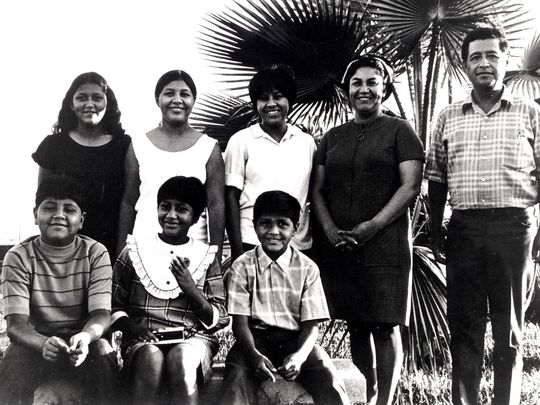 Not much is known or documented about women activists in the United Farm Workers of America (UFWA).  History rarely cites the contributions of the mujeres, esposas, hijas, hermanas, and tias, contributors who led the grape boycott and kept the home fires burning. One thing we do know: Without Helen at his side, Cesar Chavez could not have fulfilled his dream of a union to serve farm laborers.

Helen Chavez played a central role helping her husband Cesar give birth to what would become the first enduring farm workers’ union in U.S. history. Many say Helen was a humble, quiet woman with fierce determination to help change the lives of thousands of farm workers and the stamina to inspire millions of others to support La Causa (The Cause). Helen had an arrangement with Cesar that they both upheld throughout their life together: She let her husband become an international public figure, and he respected her privacy.

Cesar and Helen embraced a life of voluntary poverty to create something bigger than themselves. Helen did triple-duty: field work, raising eight children (while Cesar was on the road) and later running the Farm Worker Credit Union for more than 25 years before retiring.  Over the years the Farm Worker Credit Union loaned more than $20 million to farm worker members.

Helen and Cesar fought to ensure equal treatment and fair wages for farm workers across the country. In many ways Cesar and Helen fashioned what is known as the Latino Environmental and Social Justice Movement. La Causa made us aware of the dangers of pesticides and the unfair practices of labor contractors. The farm labor movement was responsible for eliminating the use of short-handled hoes and gave the world an opportunity to learn where their food comes from, what pesticides are used, irrigation and how what we eat is grown.

Chavez’s personal experience with the hardships of working in the fields made her an invaluable part of the spirit of the movement.  One documented story about Helen Chavez occurred in September of 1965 during the grape pickers’ strike and the table grape boycott: Farm workers had few or no outlets for their grievances, and if they spoke up out about working conditions; they were fired and quickly replaced. The young Latino union debated whether to join a grape strike begun that month by members of the largely Filipino union.  Helen, in her no-nonsense way, settled the debate by asking: “Are we a union, or not?”

In 1970, after years of violent confrontations and harassment, the growers finally recognized the UFW as the union representing the farm workers.  The growers also agreed to improve the working conditions of the farm laborers.  The decision to ban dichloro-diphenyl-trichloroethe (DDT) was part of the UFW campaign.

“Huelga!”, or “strike!” is what Helen shouted just before the police arrested her in 1966.  One well placed word, and a life of service to others. Peace be with you, Helen.