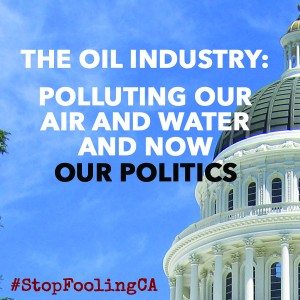 Over the last month, the power and influence of the oil industry in the California Legislature has been clear. News outlets showed how a group of polluter-friendly Democrats in the Assembly did the bidding of the oil industry, and removed the mandate that Californians reduce their consumption of petroleum by 50% by 2030 from SB 350. The final version of SB 350, which passed on the last day of session, is a strong bill that continues to put California at the forefront of clean energy and climate policy. It's just not as good as it could (and should) have been. Also well documented, was that Big Oil forced the tabling of SB 32 (Pavley), which would have introduced ambitious new greenhouse gas reduction goals. Thanks Big Oil! While SB 350 and SB 32 earned all the headlines, what seemed to slip past most Capitol reporters was the failure of many other bills aimed at stopping pollution from the oil industry. Sure, a few good bills about oil spill response and pipeline safety were successful, but only after a catastrophic oil spill in Santa Barbara AND the oil industry successfully negotiating amendments to weaken the bills (much like SB 350). So, a partial victory. The Western States Petroleum Association (WSPA), the trade association that represents big oil companies in our part of the country, is the single biggest spender on lobbying in California. In 2014, WSPA alone spent almost $9 million of the $15 million spent by the oil industry in the Capitol. Over the last 15 years, Big Oil has dropped a whopping $143.3 million on lobbying and effectively controls a number of legislators through their ability to spend big on elections and legislative campaigns. 2015 expenditures are not yet public, but the campaign to gut SB 350 likely cost tens of millions. So how is the Legislature doing when Big Oil opposes a bill? I did a quick analysis and came to the following conclusion: The California Legislature did not pass a single bill that WSPA opposed. Here's a round-up of the commonsense bills that would have helped protect Californians from oil industry pollution: (For bill language and analysis click here and search by bill number.)

That's a big list of policies that would have done a lot to protect California's water, air and communities from oil industry pollution. We can thank the big spending of Big Oil, and a small group of legislators who would rather see more pollution in their districts than cross corporate campaign contributors and lobbyists for killing these commonsense bills. The most disappointing thing is many of the lawmakers voting against bills to reduce oil and gas pollution represent Californians who live with some of the highest levels of air pollution, respiratory health disease, and drinking water pollution in the state. Like the industry has done countless times, this year it convinced these lawmakers that it's either clean water and air or the creation of jobs and economic prosperity. As California has shown, this is a false choice. We have worked to lead the country in fighting climate change and at the same time have seen our economy grow, and reduced our energy bills. You might be reading this thinking, "thanks for bumming me out!" And wondering if we can beat Big Oil. We can. But we've got to recognize how deep their influence runs. We did some amazing things this year in Sacramento, and some of our legislative leaders deserve a ton of credit for fighting so hard for our state. But if we actually want to beat Big Oil, we need elected officials who represent people, not corporations; who fight for all of us, not the profits of a few. And, if they won't, it's time to get some new elected officials. So make sure you're registered to vote and stay tuned as we gear up to win big in 2016, both in Sacramento and at the ballot box.